I will, one day, get around to painting up my "Forest Jew" partisan force that I bought a couple of years back but in between Zombies and Legionnaires I decided that I would paint up a packet of ten 20mm Soviet Partisans with NKVD officer I discovered in a ziplock bag on the painting table.

Unfortunately I have no idea when or where I bought them or who the manufacturer is, but they are nice enough figures and painted up reasonably well. 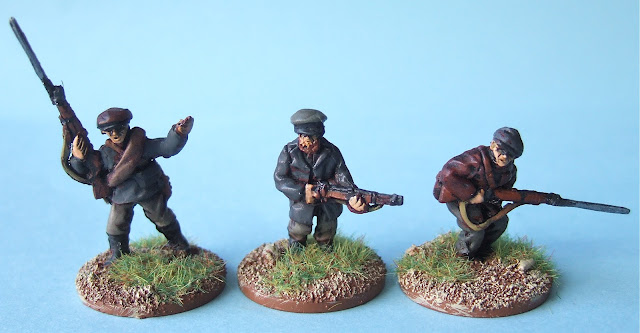 I decided to work to a slightly different technique this time, not wanting to spend a lot of time on them, but get an acceptable result. I did a heavy drybrush of a Dark Flesh over a black undercoat before picking a limited palette of dull civilian colours to use on raised highlights.

Update: Apparently the miniatures are Gulag Rats (Penal troops) from Battlefield Miniatures. Still no idea why I bought them but IIRC I did buy some German Volkssturm from them...
Posted by Steve at 12:55:00