These are the first of the (dismounted) irregular Republican cavalry. They typically wore the vaquero Mexican cowboy costume but some uniform touches such as red lance pennants and occasionally jackets were seen. 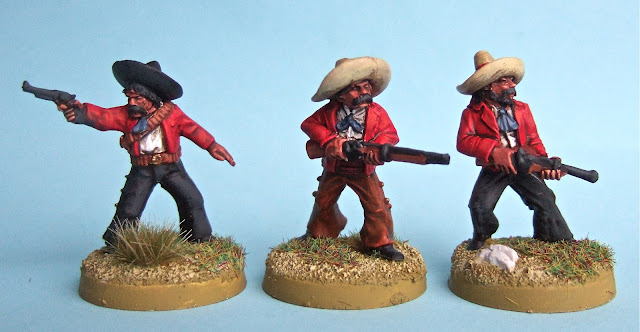 Not all the cavalry will have red jackets but these three have. As with previous figures I undercoated them white before basecoating the brown, red and flesh areas before giving them a coat of Strong Tone dip. Then I painted the rest of the figures up using standard dark to light layering techniques.

I hope to finish the remaining five of this band this evening, they are 90% done now but the battle with the light for photos will be lost before they are finally completed.

Staying in Mexico, following on from the film drama I found on YouTube of the Battle of Puebla a couple of weeks back I came across this Discovery Channel documentary, 5 de Mayo - Un Dia de Gloria.

Again it is in Spanish but does feature lots of battle re-enactments showing a variety of the colourful uniforms from the conflict.