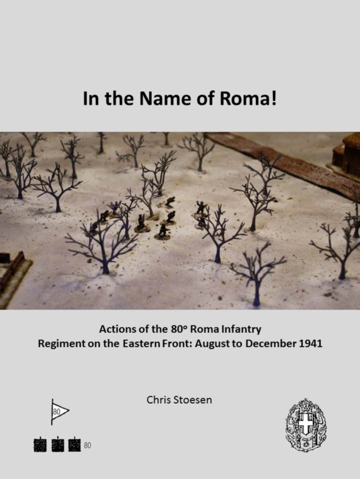 The other week I posted about the Chain of Command supplement Operation Winter Storm which contained 22 scenarios based around 6 Panzer's attempt to relieve Stalingrad, Edward King commented that Chris Stoesen had produced some Eastern Front scenarios featuring the Italian Army.

Chris has produced a wonderful e-book called In the Name of Roma, containing 30 company and platoon level scenarios covering the actions of the 80a Roma Regiment from August to December of 1941. These cover the initial actions from the open steppe to the Donetz industrial basin, including the amphibious attacks across the Dnieper, and the fateful decision of Column Chiarimonti to attempt to seize Nikitovka.

Whilst written with the Lardies rules systems in mind, the book is still very useful for gamers of other WW2 systems, and a mine of really fascinating information at the bargain price of just £3.67 for the Kindle. Cheers Edward, good heads up!
Posted by Steve at 21:46:00