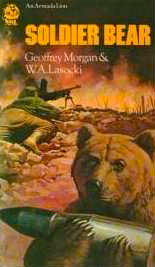 Like most kids of my generation I grew up on a diet of WW2 films, comics and Airfix soldiers. I was always on the look out for my next "fix" and recall seeing a book with an eye-catching cover of a soldier firing a bren gun and a bear carrying an artillery shell! Again, like most kids, after soldiers, exotic wild animals were another interest and here were both combined!

In today's Michael Morpurgo saturated animal war story bookshelves this would not seem that unusual but in the 1970's Geoffrey Morgan and W.A. Lasocki's Soldier Bear looked a pretty interesting story - even more so when I found out it was a true story!

I loved this book and whilst my 54mm Britain's Grizzly bear may have been a tad overscale compared to my HO/OO Airfix troops, my Solider Bear served with my Airfix 25pdr!

The story, if you don't already know, is that of Wojtek, a bear cub adopted by Polish troops in Persia who was officially enlisted to ensure he was not left behind in the Middle East when the Poles went to fight in Italy. The beer drinking bear's legendary status was cemented at Monte Cassino where he watched the Poles carrying ammunition to the guns and decided to copy what they were doing, supplying shells to the frontline artillery. 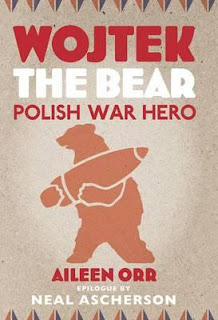 Recently I picked up a copy of Aileen Orr's book, Wojtek the Bear: Hero of World War Two, whilst it didn't add that much to my original Soldier Bear book from a wartime perspective, it did cover more of his post war adventures in Scotland with the Poles before they were demobbed and Wojtek was transferred to Edinburgh Zoo. The book also covers Orr's efforts to have a statue commissioned of Wojtek and I hope she is successful in that regard. If you aren't aware of the Wojtek story I do recommend Orr's book even if half of it is a basic history of Poland which is helpful background to the plight of the soldiers who adopted Wojtek.

Wojtek even has his place in our hobby and he is included in the Poles in Italy briefing for Flames of War. Battlefront even produced a 15mm scale model of him, I am trying to resist the temptation!