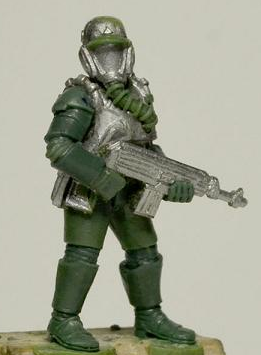 Hurrah! I managed to get some painting done at lunchtime and I was hoping that I might grab some time in the afternoon to finish the first of my two Nort infantry squads for Rogue Trooper. Unfortunately after almost a week of great sunny weather, today was as dark as sin and by 2pm it was almost pitch black outside - so much for natural painting light!

I only have the bases to do and the lenses on their masks so hopefully tomorrow should see the first finished figures of 2015! In the meantime I grabbed this image of a green of one of the forthcoming Souther troopers, which hopefully Mongoose will be releasing soon...

This Kickstarter has been bedeviled with delays and problems, but is slowly getting there. Matt Sprange has posted that due to the delays we'll be getting some freebies figures that didn't get unlocked during the campaign, which is cool. Hopefully 2015 is the year of the Rogue!
Posted by Steve at 20:32:00