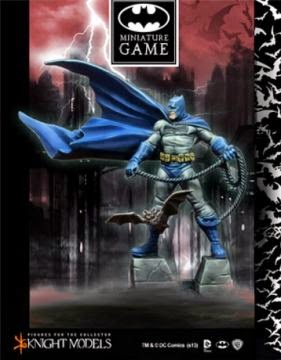 This is all John Lambshead's fault.... and Ian 'Hendybadger' Henderson's. It goes like this - I am a Batman fan. It's not an addiction but I do have a shelf of Batman graphic novels and a pile of DVD's including the excellent animated series and movies (animated, Burton and Nolan). I might tell SWMBO that they were bought for the kid but truth be told there was a secret agenda - the Dark Knight rules and has done since I read Miller's seminal graphical novel as a teenager and realised it wasn't all Adam West going Kaa-Pow!

So what has this to do with John and Ian? Well it started with the latter posting on his blog an attempt  to justify (no doubt to his credit card) the cost of Knight Models Batman: The Miniatures Game with an interesting claim that it was cheaper than other games despite the average miniatures price being around the £12 mark. It wasn't totally convincing but I like Ian's more is less approach and would like to recommend him for Chancellor. As for John, he has started posting photos on his blog of the miniatures which not only appear in this blog's sidebar but also my Facebook stream, tempting me like a bacon butty for second breakfast.

Part of me is still baulking at the individual miniature cost (despite Ian's economics) or maybe I am baulking at what SWMBO would do to me if she found out that I paid £12 for one toy soldier. But they are very, very pretty, Rolls Royce standard and it is Batman.  I am struggling to resist...
Posted by Steve at 21:43:00