May is... Dux Bellorum Month! 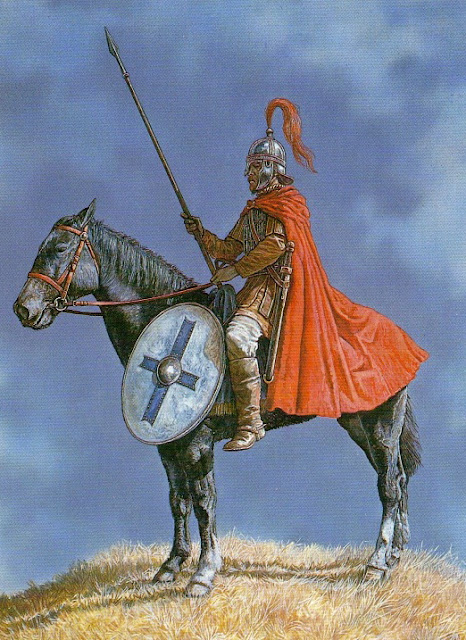 After a couple of months in the twentieth century it is time for a change of pace and set the time machine to the Age of Arthur!

I've always wanted to do the Arthurian period ever since I saw this wonderful picture by Richard Scollins in Military Modelling back in the eighties.*

I picked up a few packs of Foundry Arthurian figures a few years back and the excellent WAB book but it was really too big a project, even if the Romano-British would make for excellent fantasy humans as well.

Mike Baumann donated a box of Old Glory Arthurian figures to the cause a couple of years back but it was the publication of Osprey's Dux Bellorum last year that proved the spur.

The game only requires armies of around 50 miniatures a side so I dug out Mike's figures to see what I had and what I needed to get to finish them off. Luckily West Wind had a sale on so I was able to fill the gaps quite easily. Unfortunately due to pack composition I am the odd figure short here and there but I am sure I can find some spares or proxies.

So I have a nice pile of unpainted white metal, enough to make a Romano-British army, a Saxon army and an Irish army. The target this month is to finish at least two of them...

* Richard Scollins is a bit of a pain on this front, I always had a niggling urge to dabble in the American War of Independence after he did some fantastic illustrations for an article on Guildford Court House - I am NOT looking at the Perry plastics though, honest!
Posted by Steve at 07:14:00