I am sure wargamers spend as much time pondering how to base their wargames figures as they do playing with them. Dux Bellorum is one of those cases in point as basing is not that important as long as they have the same widths (which is also the measuring unit in the game).

I had decided I wanted to get maximum use of the miniatures in other games with Brytenwalda being a skirmish game I fancy trying one day. Figures for that are individualy based.

Logic dictates then that sabot bases are the way to go, but how to base the individual miniatures? Some people use 1 pence pieces, some 2 pence. Looking at the models, the Old Glory would go on 1p's, but not the more dramatically posed West Wind.

To thrown an additional spanner in the works I decided I would also like to be able to use the figures in fantasy games such as WHFB as they would make for good fantasy humans (that effectively ruled out the round base in sabot option).

And of course it would be useful to ensure they could be used in Dux Britanniarum if needed!

After a lot of procrastinating I came to a decision! :-) 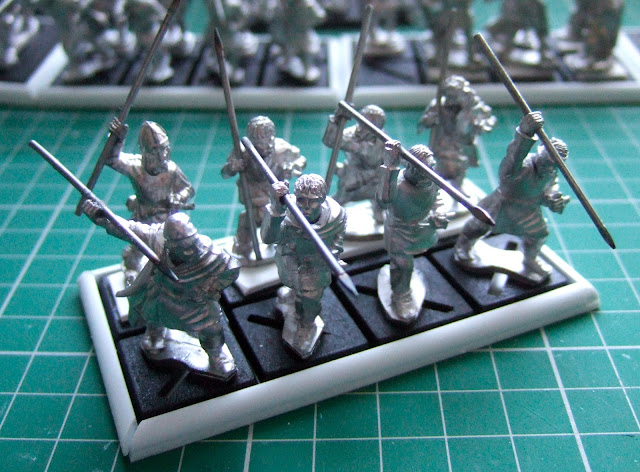 WHFB dictated that the infantry needed to be based on 20mm x 20mm squares and cavalry on 25mm x 50mm. I had decided that Shieldwall elements would have eight figures and cavalry three so an 80mm base width was the obvious size. Inspired by the sabot idea I decided to create mini-movement trays for the figures. Infantry ones are 80mm by 40mm, cavalry 80mm by 50mm. 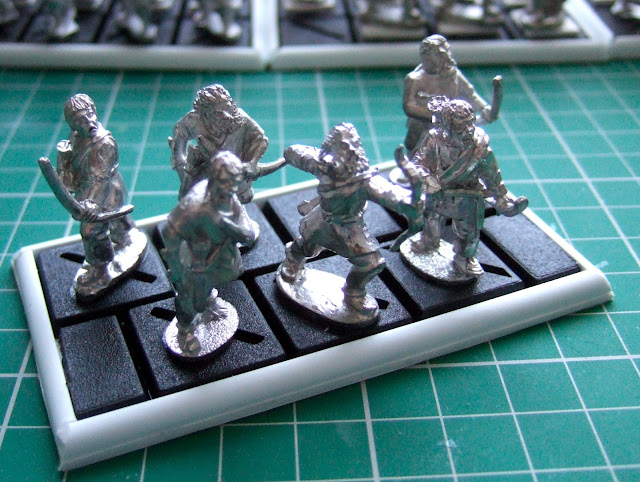 For eight miniature infantry units the figures drop in the base. for four or six figure units I intend to drop in empty slotta-bases (maybe with a rock or discarded shield on) to fill the gaps. For the bow above I have cut one slotta-base in two to add some variety. 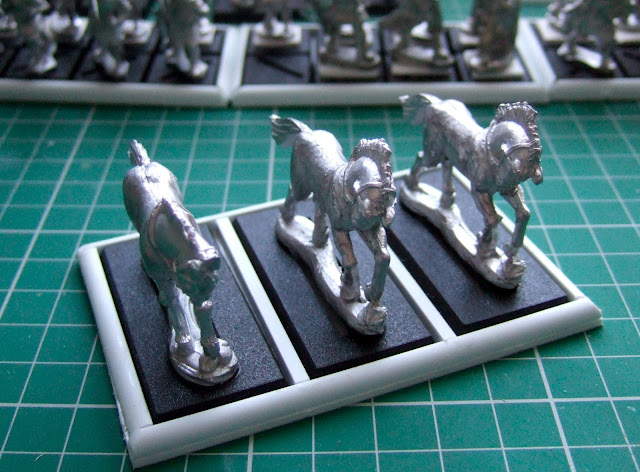 For the cavalry I inserted some 2.5mm wide plastic rod in between figures to ensure the base width is 80mm not 75.

Overall I am quite happy with this solution, it seems to answer all the issues I considered and allows the miniatures to be used in a variety of different types of game going forward...
Posted by Steve at 13:19:00