During the daily commute my mind often wanders onto matters wargaming. There is no real pattern to this and today for some unknown reason I started pondering a points system for Iron Cow (my SF armour rules).

Now I have no desire to play so-called balanced games using points, indeed my original train of thought started mentally bemoaning how Bolt Action army lists put (IMHO) too much emphasis on points as opposed to historical accuracy. However, I know lots of people like them as they (erroneously) believe this gives a fair and balanced game (which it doesn't, if you want fair and balanced play chess). That said if points systems is what people want, who am I to argue?

So how do you go about constructing a points system? An interesting question as you need to make a decision on what factors are more important than others when it comes to the game.

Taking Iron Cow for example each vehicle or base of infantry has stats for speed, weapon accuracy at six range bands, weapon penetration rating at six range bands, three armour ratings (front, side and rear) and an AA rating. It also struck me that the units Morale modifier also needed including...

So what is more important and therefore warranting more points cost? The trade offs between firepower, speed and protection are as old as time and certainly befuddle real life tank designers.

My initial thoughts were to rate each of the core aspects as roughly similar ie. speed = range/penetration = armour. 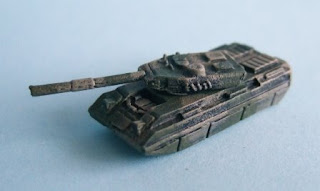 Applying this to the M82 Boyd MBT this gave me 28 + 22 + 33 + 38. Additionally I took the AA rating and multiplied that by five and the morale factor also multiplied by five. In total this gives the Boyd a points cost of 151. All seems very sensible. 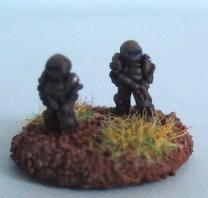 Then I applied the same process to a base of infantry. The speed bumps came up at 72 points. So a tank costs little more than two bases of infantry? Ummm....

I decided to put some more weighting on firepower, dividing range accuracy by 5 not 10 and dividing penetration by 1.5 not 2. This took the Boyd up to 183 points but the infantry were now 96. More ummm...

Take three. Rather than add the range accuracy and weapon penetration, how about applying a sliding scale with better range and penetration at distance costing more?

So, splitting the six ranges into three blocks; short, medium and long, I divided the range accuracy per band by 5, 2.5 and 1 respectively, and then multiplied the weapon penetration ratings by 1. 1.5 or 2 whether short, medium or long. Additionally I reduced the speed division from 10 to 5.

However this fix has resulted in firepower costing around three times what speed and protection do (on the Boyd 159 points against 56 and 60). Ideally the three factors need to be balanced, so...

I changed the speed division factor to 2, speed now costing 140 points not 56.

For armour I increased the multiplier to 6, so the tanks armour costs 180 points.

Adding in the AA and Morale points, this takes the Boyd to 514 points. The infantry 170. This is much better, almost sensible...

Split down the difference between the tank and infantry are speed 140 against 60, firepower 159 against 62 and armour 180 against 6. Speed bumps indeed...

The only issue now was that the totals were quite large numbers and given Iron Cow units have lots of tanks and stuff an AmRep Marine Armored Regiment. for example, would cost something around 26,000 points!

Whilst I liked the sound of 25,000 point a side battles, logic dictated that the element points total is divided by ten at the end to produce a more sensible looking number! This means a Boyd would now cost 52 points, an infantry base 19 and a Marine Armored Regiment about 2,620 points, which all seems about right.

Of course this is all based on an assumption that my Excel formulas are correct (and cleverer people than me have got them wrong!) and subject to a sanity check against the other nations and their tanks...

Will this give a balanced game? Of course not, there is no such thing, but if it keeps people happy who am I to argue?
Posted by Steve at 13:24:00