A little while back I supported Black Hat Miniatures WWI French Halflings Kickstarter which they had undertaken to help beef up the WWI Goblin range they purchased from Frank Hammond. Whilst I did not want them for a WWI fantasy game particularly, I wanted to support the venture and thought I could find a use for them in Panzerfäuste.

Enter the Troupes Coloniales Umbongodwongolese Halfelins! With the Gnome homeland of Dûn-Nomin invaded by the Boche Dwarves, the Gnomes turn to their colonial possessions in the dark continent of Umbongodwongoland to provide troops for the fight.

There are a number of native races in Umbongodwongoland, one of whom are Zulu like halflings, some living in the central rain forest areas and are now ruled by the colonial authorities of Dûn-Nomin. With this in mind I decided to paint the Black Hat halflings as these.

The uniforms are based on the 1940 French Colonial Troops uniform, with the beige trousers inspired by the look of the Army of Levant. They are not 100% historically accurate, but then the French did not field Zulu halflings against the Germans so I am on fairly safe ground. 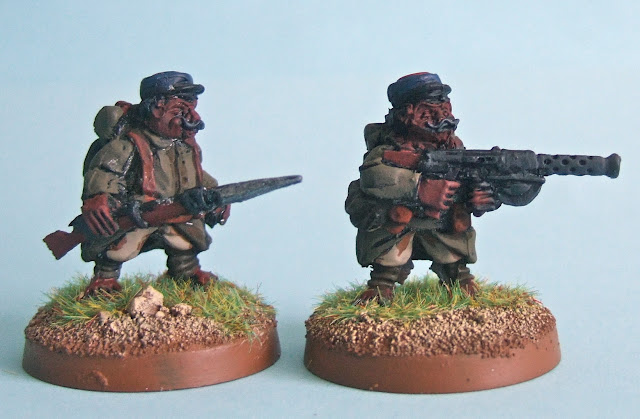 The figures are quite nice and easy to paint up, the good thing about the Kickstarter is that it allowed Black Hat to produce a full basic range with support weapons (still to be painted). Whilst Kickstarter is mainly used for big projects in the gaming industry, this does go to show that it is of value to the smaller games company and the fans of off the wall concepts and ideas.