Flames over the Sinai (and Gromit-o-Matic) 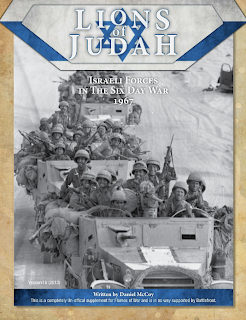 You may recall my murmurings about a 1973 Arab-Israeli project in 6mm using Flames of War, given it is the 40th anniversary and all that it would be pretty good to start the ball rolling this year...

Yesterday I can across another really interesting online resource to support my plans in he form of Daniel McCoy's blog Broke Low and the downloadable rules and lists he provides for the 1967 Six Day War.

The lists for the Egyptians, Israelis and Jordanians are really excellent and will be really useful along with the NDC lists. The effort Daniel has put into the presentation is especially noteworthy. I know it is not necessary but it does look the business and a pretty good facsimile of the official Battlefront briefings.

I just need to sit down and start pencilling some forces out and get the ball rolling...


Gromit of the Day: