Good Morning, Vietnam! (and Stat's The Way To Do It, Lad!) 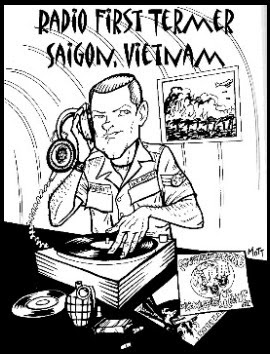 Radio First Termer was a pirate radio station that ran for just three weeks out of a brothel in Saigon in 1971 and the website is dedicated to not only promoting the station, its DJ Dave Rabbit, but also restoring the first three hour pirate radio broadcast.

Listening the broadcast yesterday was a great experience and the work of the restoration project to preserve this little bit of Vietnam history is one to be applauded. It struck me that the broadcast would make for a great soundtrack to any Vietnam game with its mix of hard acid rock (The Who, Cream, Santana etc) and irreverent commentary.

The language and jokes are a bit colourful (I won't post a picture of the Dave Rabbit shirts!) but it is reflective of the period and to be honest of it offends you more than playing games about war I think you need to have a serious sit down and think about things!

In conclusion, if you are interested in the Vietnam War or game the period I would thoroughly recommend downloading all three parts of the broadcast from here.