Mantic Don't Have A Leg To Stand On...

You may remember me getting a tad annoyed with Mantic over the shipping of the Dreadball Kickstarter almost two years ago, especially their decision to supply retailers before the people who had funded the project. Consequently I suppose it is no surprise that they do it again with Mars Attacks... 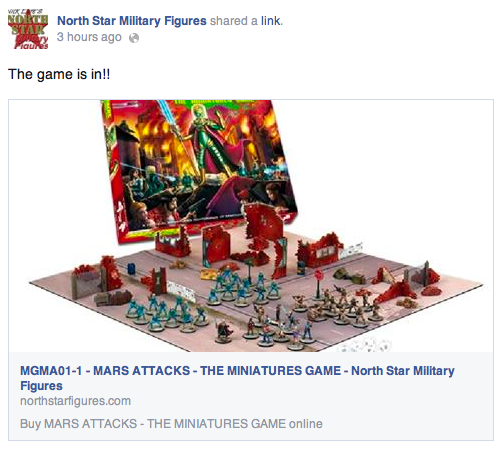 This time they claim they are shipping any Kickstarter pledger whose parcel weighs under 4kg now, along with the trade orders*.

What about those whose boxes weigh over 4kg? (ie. the ones who pledged the most amount of money).  Well, apparently there is an issue with the Big Robot in that it has been made with two right legs which causes the delay.

How so? Surely some of the under 4kg pledges include said Big Robot?  Yes they do, and Mantic say they will ship those separately at a later date, having sent the rest of the order this week.

So why can't they do this with orders over 4kg? Well, they say these orders will be shipped by courier (as though that is something special) and they need to go all together as one box.

No, I can't think of one good reason why they cannot ship the big box now (by courier) and the robots as one separate parcel when they arrive with the right (and left) leg.

Mantic have offered to send out over 4kg boxes now sans robot(s) but this will cost you an extra $10.

Not impressed, but not at all surprised. At least this isn't a potential Christmas present I planned to paint up this time.