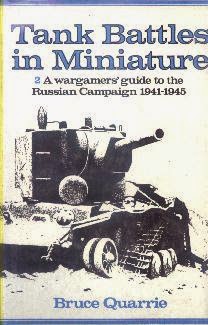 Like many greying wargamers my entry into the hobby was largely through the classic wargaming books at my local library, with volumes by Featherstone, Grant, Wise and Quarrie being regularly borrowed. One series of books much loved was the PSL Tank Battles in Miniatures series with titles by Featherstone and Quarrie covering North West Europe, the Western Desert, the Mediterranean, the Arab-Israeli Wars and the Eastern Front. The last one was the only one my local library didn't have and with my interest really focused on the other theatres it is one I had never read.

Over the last few years I have been scouring eBay and wargames shows for some of the old school books of my youth including the Tank Battles series (I know John Curry has reprinted them but part of the nostalgia was the old covers!). I've had four of the five Tank Battles books for a while now, but the Eastern Front volume has already remained elusive (or expensive - check on the one listed on eBay today for £182.98!).

Fortunately I managed to win a copy last week for under £15, which I am very happy with and it arrived today. I have only managed to give it a quick flick through but there does seem to be a lot of really interesting stuff in it including illustrations of German and Soviet unit formation, Soviet tank battalion defence formations,  a zones of terrain map showing extents average snowfall. Great book.
Posted by Steve at 18:27:00