Five Games That Made Me The Gamer I Am Today: (5) Flintloque

It might seem a bit egotistical to pick a game that I wrote as one of my five but honestly it's not a case of me massaging my big head! :D 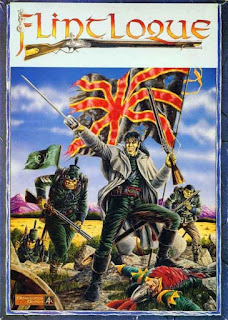 The idea of historo-fantasy was not new when Flintloque came around, there had been an excellent article in Games Review Monthly magazine that extrapolated the Warhammer world into the Malburian period using the recently released Citadel Marlburian figures as Elves and Empire with 40K Grots having green stuff tricorns added. That idea was filed away in the back of my head as a "one day" possible project but I was surprised when (doing miniatures reviews for Games Master International) a small parcel turned up from Alternative Armies which comprised of an Orc in a Napoleonic British uniform and a Dwarf in a Prussian Landwehr one.

A quick phone call to (then) Alternative Armies proprietor Mac led to me writing up a set of rules (oddly based on Iron Cow its genesis coming from Battles with Micro-tanks) using the 20 year old percentile firing system! For a couple of years Flintloque burned brightly and grew a fervent fanbase. Unfortunately economic pressures saw the company sold on (and later on again) and whilst Flintloque and Alternative Armies technically still exist it is not what it was for that brief moment in the mid-nineties.

Given the derivative nature of its rules I am not including Flintloque because of the rules system, even though it oddly enough worked well and made for a fun skirmish game. No, it is the combination of fantasy and historical elements in the background which has influenced much of my hobby time since 1995 and my strange fascination in dressing Orcs and Dwarves up in historical military uniforms from through the ages...