This time last week saw me down BIG with 20 other gamers from around the country to partake in a Sharp Practice weekend brilliantly organised by Phil and Jenny. The unfortunate extension of Covid restrictions meant we had to operate in pods which restricted us moving around tables but it was still a great experience. I had only planned to take a couple of photos per game but that idea only lasted ten seconds when I saw the plethora of excellent tables and armies on show- I had to record the fun!

As a number of participants had not managed to get a lot of gaming in, Sharp Practice or otherwise, we warmed up on the Saturday morning playing the Defence in Depth scenario from the rulebook my brave Italians facing Rob's defending Royal Navy force... 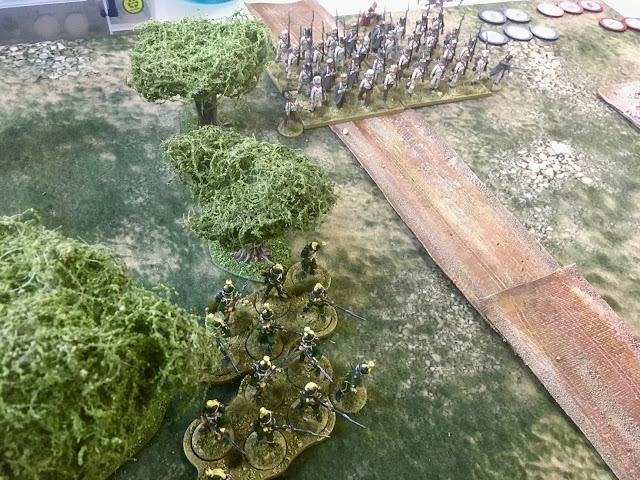 A very different opposition to what I'd faced previously Rob deployed a carronade in front of his Primary Deployment Point which I was tasked with capturing. 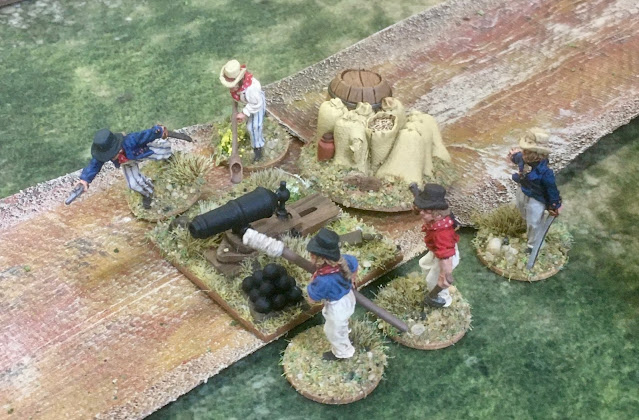 This was soon supported by two groups of Royal Marines... 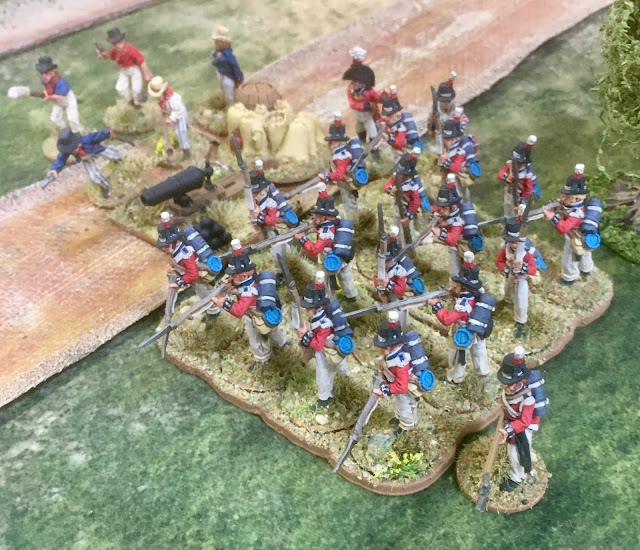 And two large groups of unruly Sailors (who spent most of the game hiding behind the monastery probably having found the monks stock of vino). 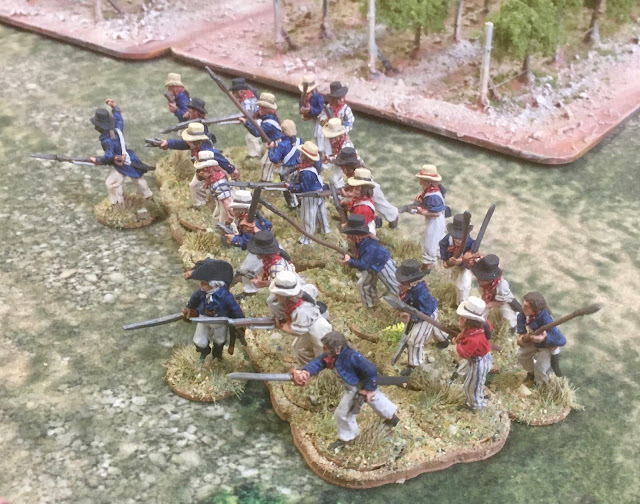 Deployed behind a skirmish screen my Italian attack column marched down the road towards the British. The Italian tactics were not going to be subtle! 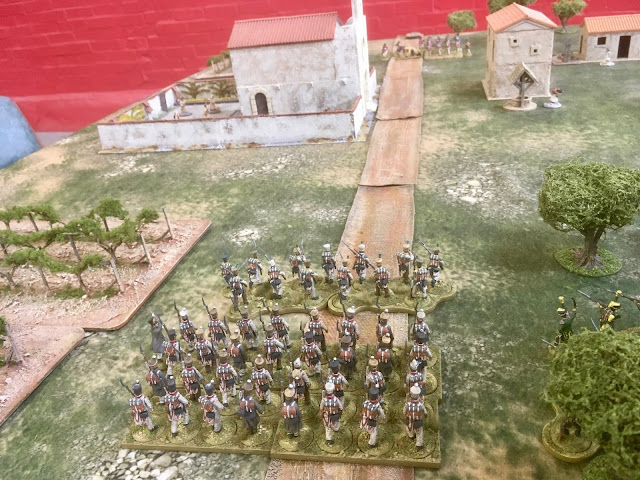 The carronade opened fire on the Italians. I got my first shock of the weekend here as the diddy little cannon packed a helluva punch with more hit dice than a regular cannon! Maybe a more subtle attack plan would have been a better idea!

The carronade fire began to take effect, though with six groups in close proximity the effects of the hits spread across the attack column and the skirmish screen. 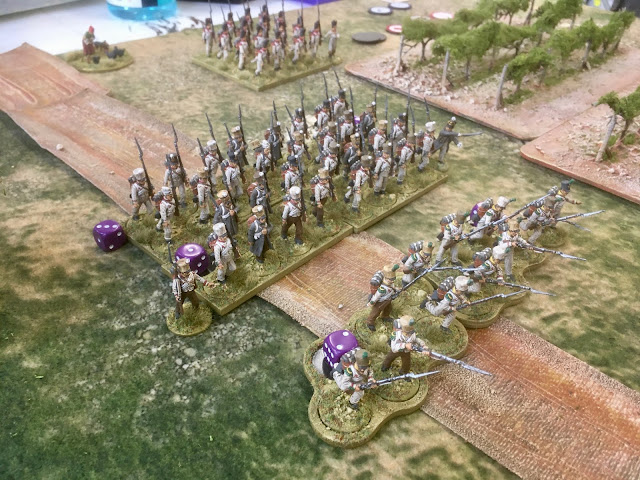 On the flank of the attack column I shadowed the main force with two groups of light infantry Volteggiatori skirmishers. 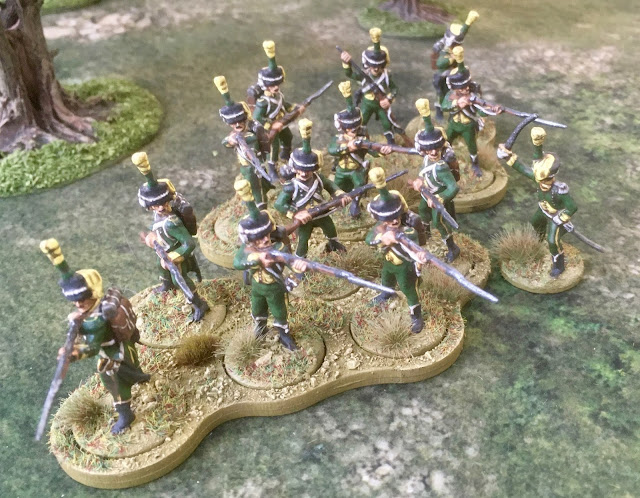 Whilst Rob deployed two groups of Royal Marine skirmishers from behind the monastery walls... 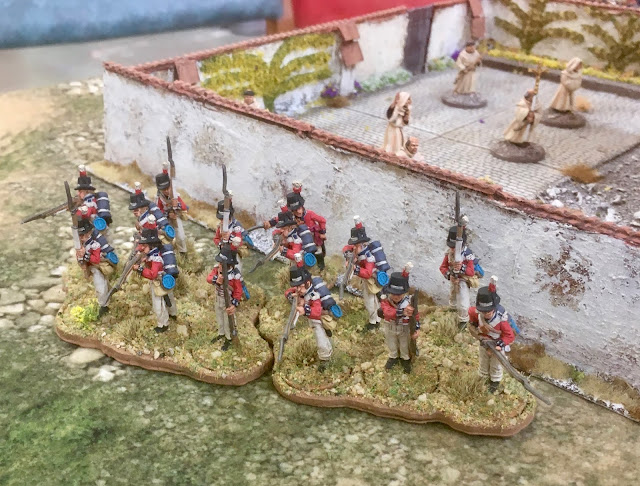 Firing at the Granatieri who were advancing alongside the Fucilieri attack column. 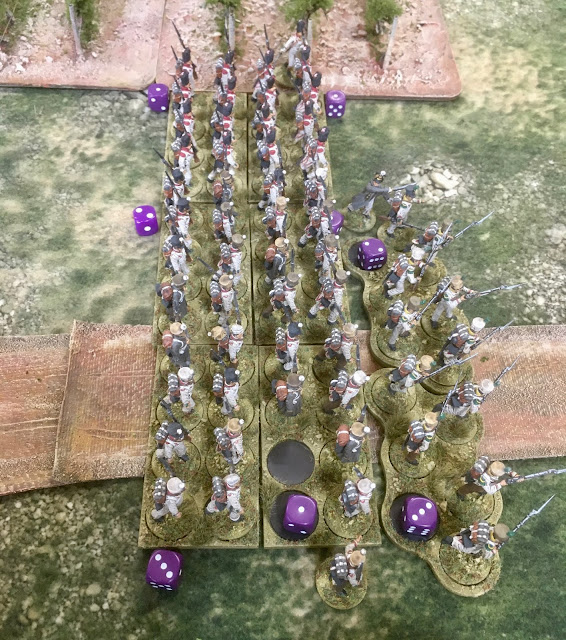 The light infantry Volteggiatori engaged in a firefight with one group of Royal Marine line, Rob having split the formation up into two separate commands. 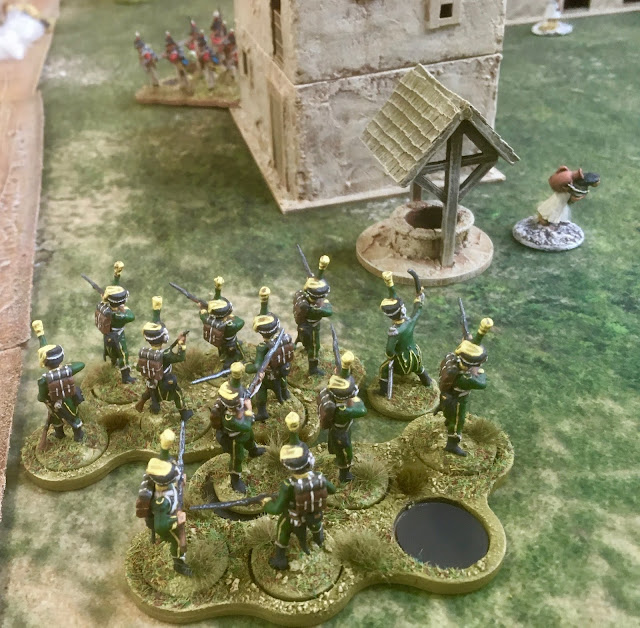 With the pesky Royal Marine skirmishers taking pots shots at the attack column the Volteggiatori skirmish screen and Granatieri deployed to deal with them and any other threat to the Italian flank... 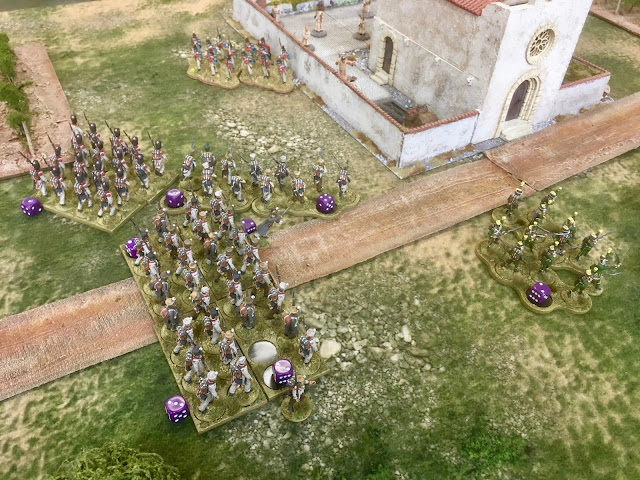 Undoubtedly fortified by their rum ration the Marine skirmishers charged the Volteggiatori and killed nine in one round of fisticuffs... 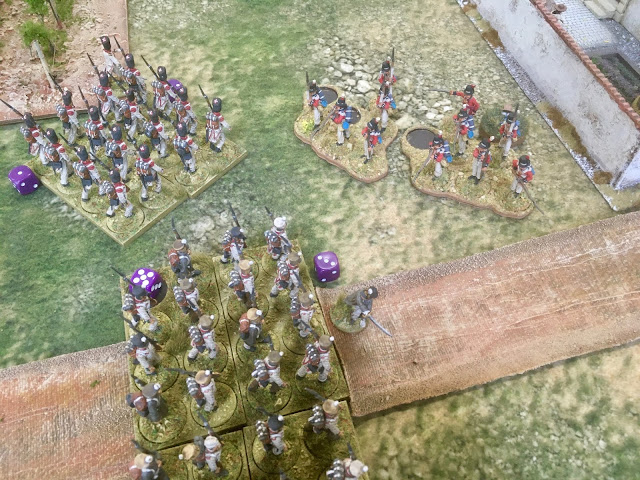 Breaking the remaining Italian skirmishers who fled through the woods dragging their wounded leader with them! 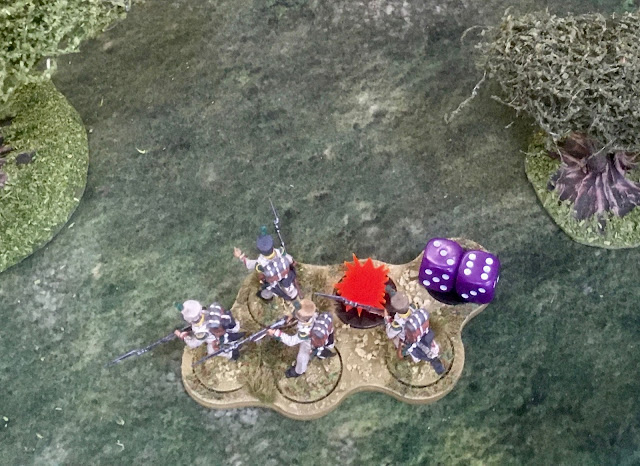 The Granatieri exacted revenge on the Marines putting them to the bayonet, killing several and forcing the remainder to flee ingloriously clambering over the monastery walls in at attempt to escape the cold steel of the grenadiers! 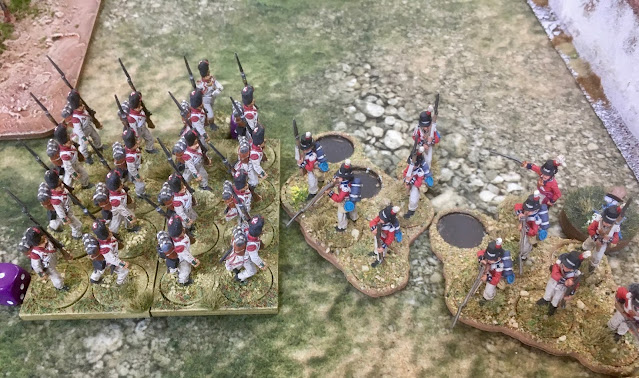 Meanwhile the attack column continued its relentless advance down the road. The carronade pouring round after round of fire into it. 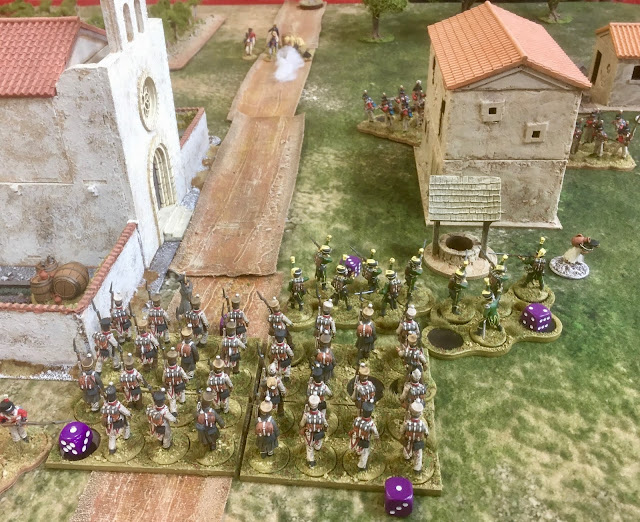 Rob's detached group of Royal Marines moved around the house to try and surprise the light infantry skirmishers. 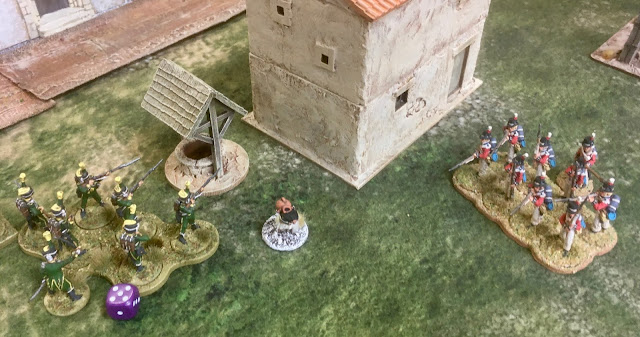 Whilst the Fucilieri marched resolutely on... 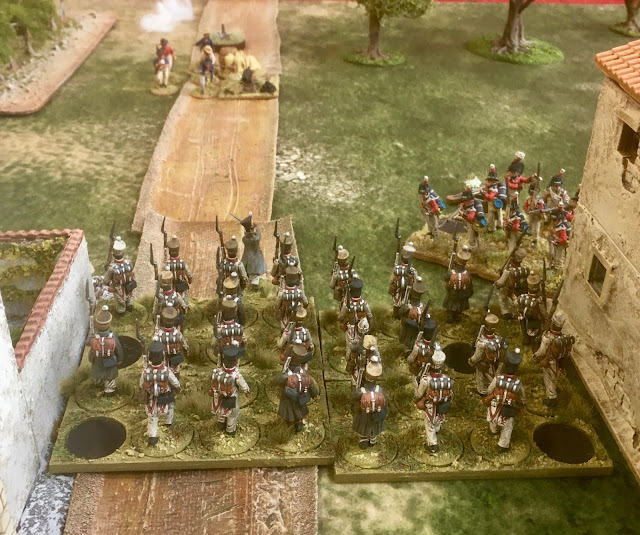 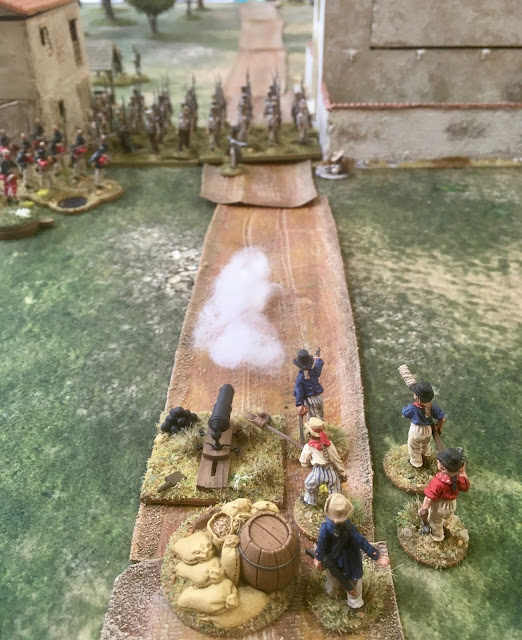 With victory in sight I ordered the Pas de Charge! and rolled 13 on 3D6 which would take them into fisticuffs with the pesky carronade and allow me to put the crew to the bayonet and seize the British deployment point.
Except the column hit the detached Royal Marine group and came to a grinding halt after just one inch! Doh! 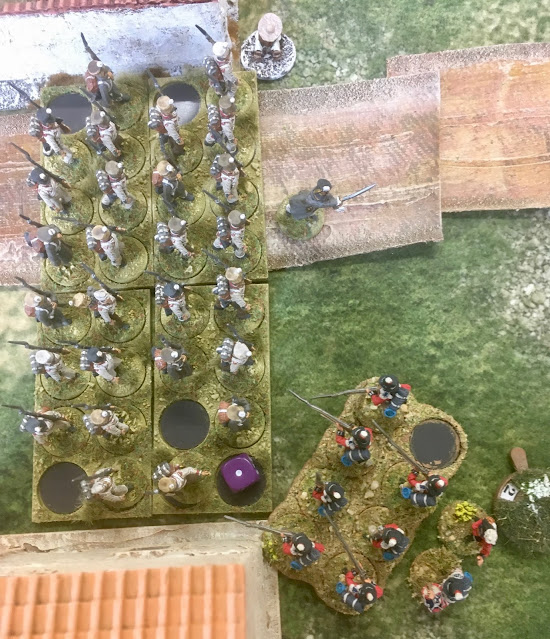 Despite three groups supporting the Fucilieri who had contacted Marines, the aggressive lobsters won this round of fisticuffs forcing the Fucilieri back and breaking the formation. My Force Morale took a major hit. 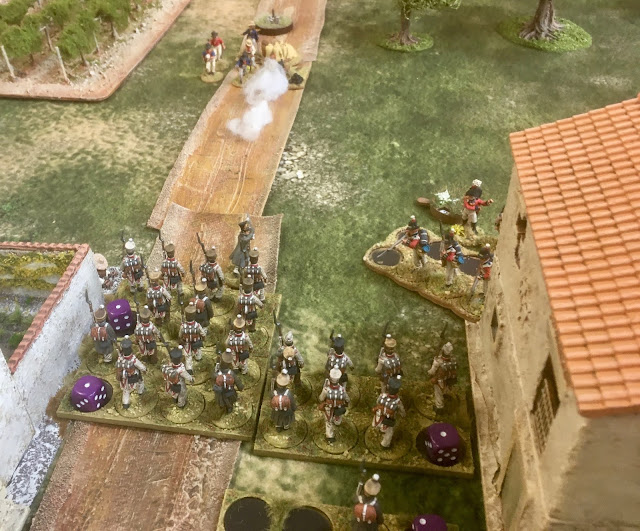 Rob's carronade then fired his final round of canister into the Fucilieri and another group broke under accumulated Shock reducing the Italian Force Morale to zero... 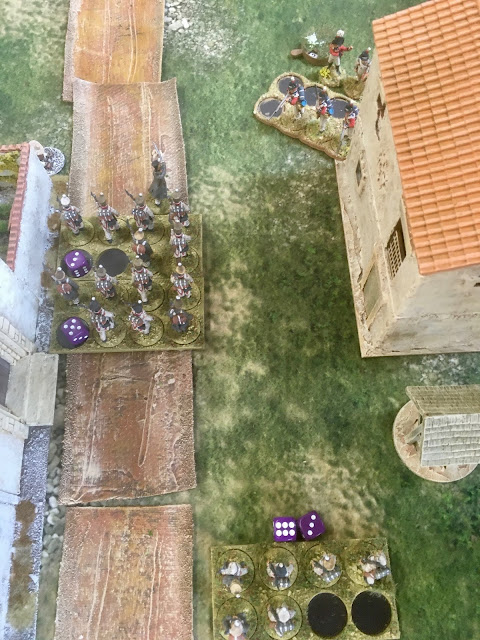 The day belonged to the British!
An enjoyable close game I was largely happy with how the attack column had worked, first with the skirmish screen to mitigate the carronade fire and later the use of the Pas de Charge! to advance quickly and shake off some of the Shock. I was however cursing myself though for messing up right at the end by not splitting the column into two before that final charge (I had the activations to do this) having one half focus on the Marines and one charge the carronade and potentially secure victory.
Oh well, live and learn for another day, well played Rob!
Posted by Steve at 12:13:00