Five Games That Made Me The Gamer I Am Today: (4) Full Thrust (2nd edition)

From fantasy it was a small step to boldly go into SF wargaming though after playing one game of Warhammer 40,000 I wasn't impressed with the rules although I bought far too many 40K figures! :D Simon and I did have a traditional annual pre-Xmas game of the GW/FASA Star Trek III: Starship Combat Game but whilst we liked the background the game itself didn't inspire repeated play. It was not until 1991 that I discovered a small A5 photocopied set of spaceship combat rules that within one year was re-released as an A4 second edition with a full colour cover... 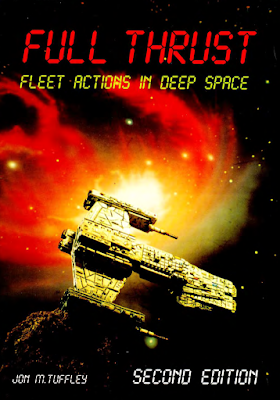 4. Full Thrust (2nd edition) by Jon Tuffley (1992)
Compared to the complexity of American rules like the aforementioned Star Trek game or the legendary Star Fleet Battles, Full Thrust used simple mechanisms that allowed you to command a fleet of up to a dozen spaceships of varying type and have a challenging game in an evening with minimal record keeping. This 'Keep It Simple' approach built on my experience with Warhammer 2nd edition and has coloured my preferences in game play to this day.
For a couple of years Full Thrust dominated my gaming building up fleets from GZG and other companies (one having all the ships snapped off their bases by an unsupervised over enthusiastic toddler!), Simon, James and myself also raising Star Trek fleets using the MicroMachines models and running popular Star Trek: Full Thrust participation games at shows across the UK.
My gaming eventually moved into other areas with Aeronef replacing Full Thrust as my "flying ships" game but I still have fond memories of Full Thrust and one day will dust off my NAC fleet and repair the ESU one to boldly go once again...
ps. a PDF of the rules and the supplements can be downloaded for free from the Ground Zero Games website here.
Posted by Steve at 10:49:00