Ye brave honest subjects who dare to be loyal,
And have stood the brunt of every trial,
Of hunting shirts and rifle guns;
Come listen awhile and I'll tell you a song;
I'll show you those Yankees are all in the wrong!
(The Rebels, 1778)
A couple of weeks back Andy asked if I wouldn't mind trying out an American War of Independence scenario he was planning to run during the recent Virtual Lard event. He supplied the figures and terrain all I had to do was turn up. What he didn't tell me is that I had to play the bally Tories!
The forces of King George embarked on perilous and noble mission to apprehend local farmer William Quigley who had spurned His Majesty's good grace and raised arms against the crown. The rapscallion! 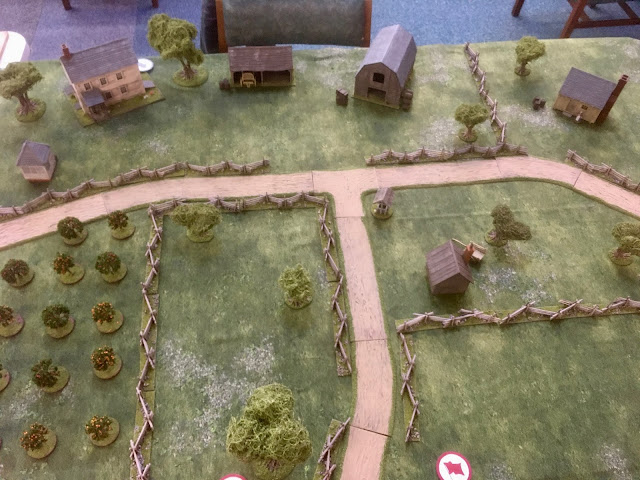 Quigley had called upon support from his equally dastardly cousin Barnabas Quigley, a Lieutenant in the New York State Militia, who brought some rebel scum with him to resist the forces of law and order! 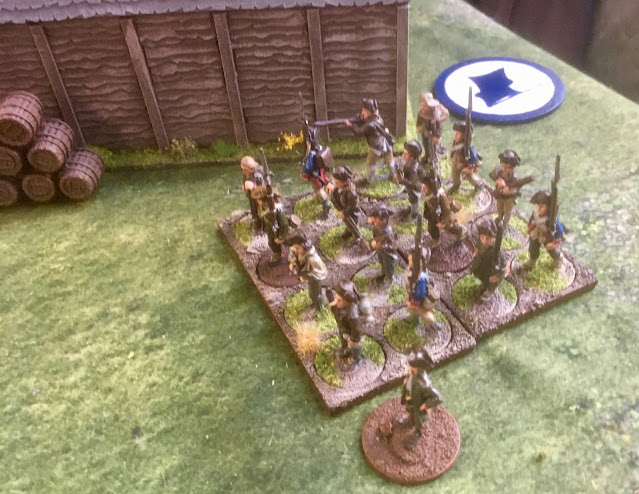 Not all men of New York are treacherous curs and bounders though and Lieutenant Phineas Dixon arrived on the scene with two groups of fine New York Volunteers (provincial state troops who looked much smarter than their rebellious neighbours - and stood to attention straighter!) 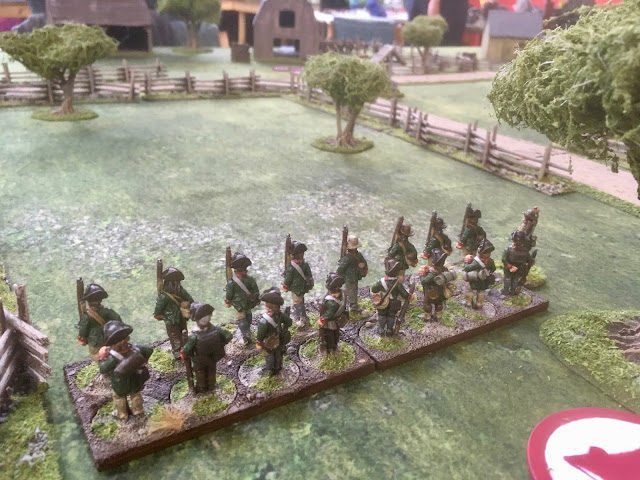 Sergeant Edward Collins deployed a group of Rebel Militia Skirmishers behind the rail fencing to hide and treacherously shoot any servants of the Crown who might appear to restore order. 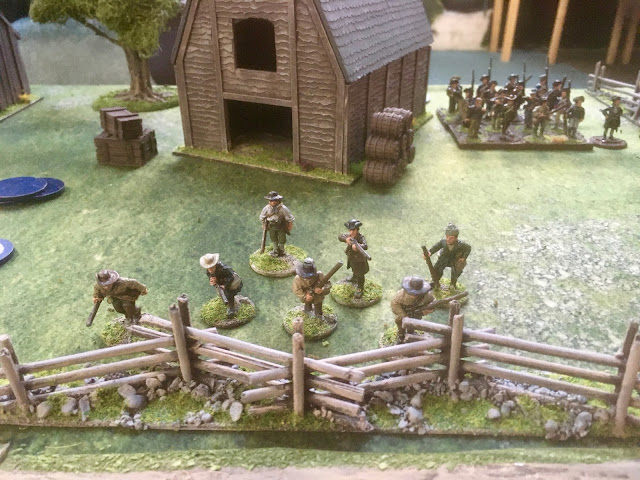 Huzzah! The stout-hearted Sergeant Reginald Dagenham arrived on the field of fray with two groups of Light Infantry Skirmishers... 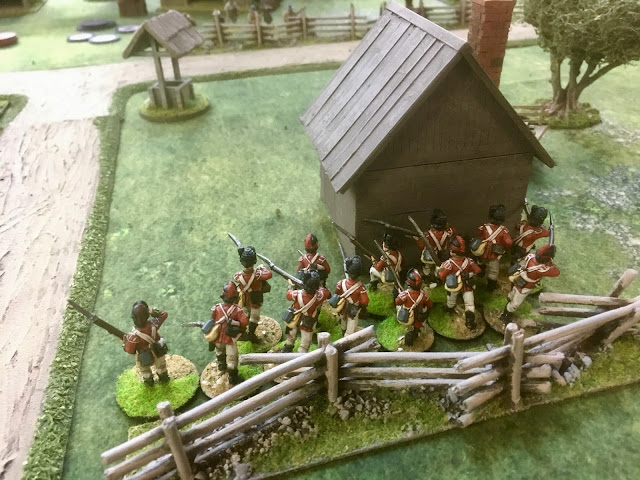 As did the noble Captain Reginald Colfield, commander of two groups of His Majesty's 64th Foot, an officer of fine breeding positively chomping at the bit in his desire to give the damned rebels a good thrashing with his horse whip! 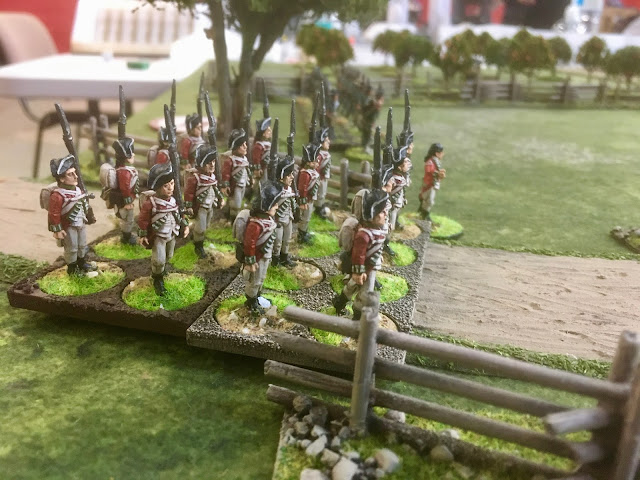 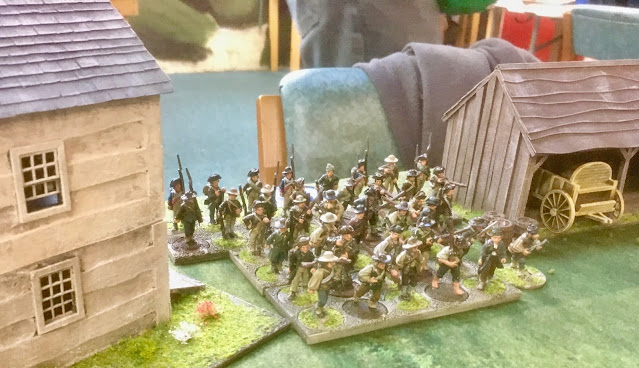 Fortune favours the brave and stout-hearted Sergeant Dagenham orders his men to advance on the rebel position and shoot down the traitors. One rebel falls dead and his unit takes Shock. Tally ho! 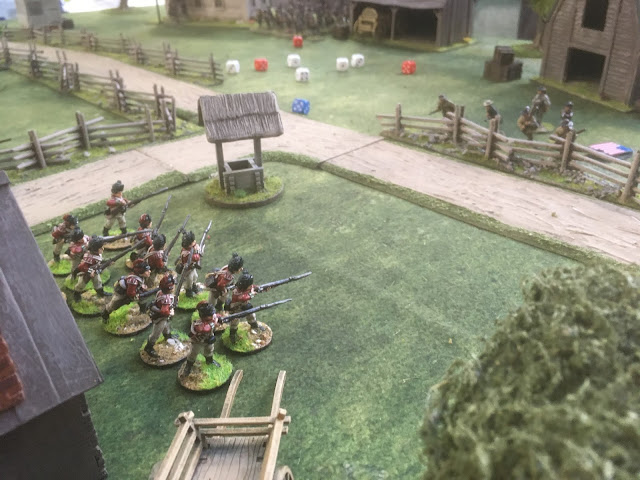 A group of brave and loyal Tory Militia Skirmishers under the command of Corporal Jeremiah Gordon swiftly advances forward and takes position behind some rail fencing, taking aim at their rebellious cousins... 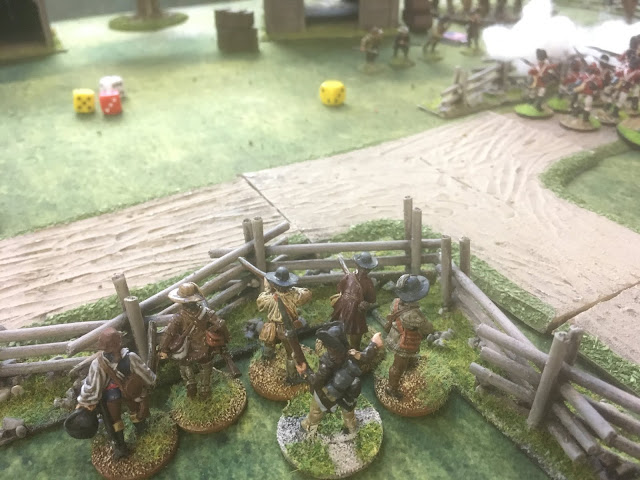 Sergeant Hawkins orders his newly raised Militia unit up to the fencing opposite Gordon's men. 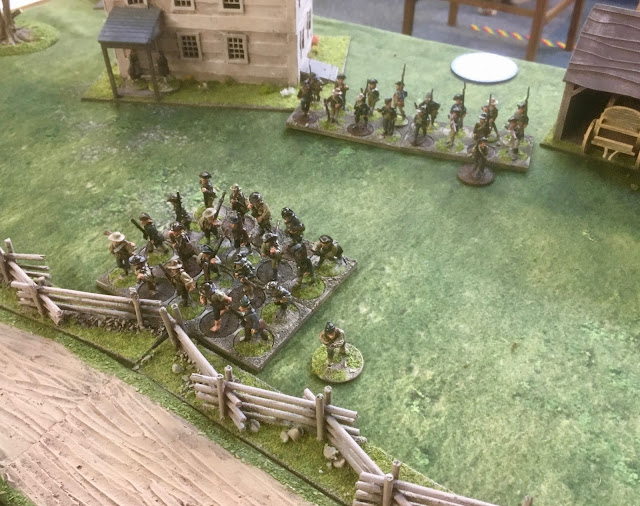 Meanwhile another group of loyal subjects of the King, led by that jolly good chap Corporal Thaddeus Bourne, move through the orchard and begin firing at Hawkins' militia... 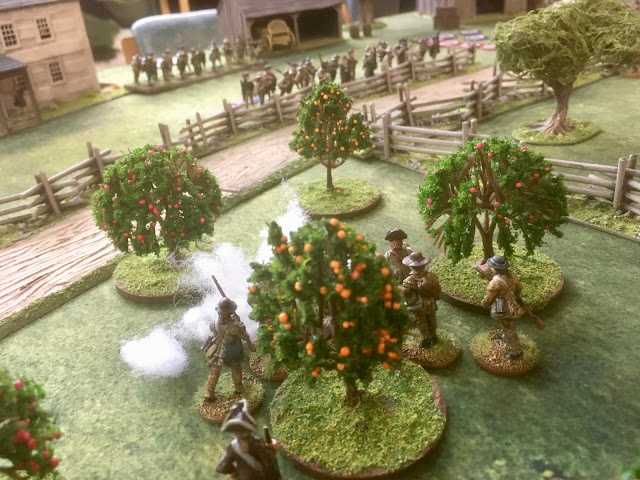 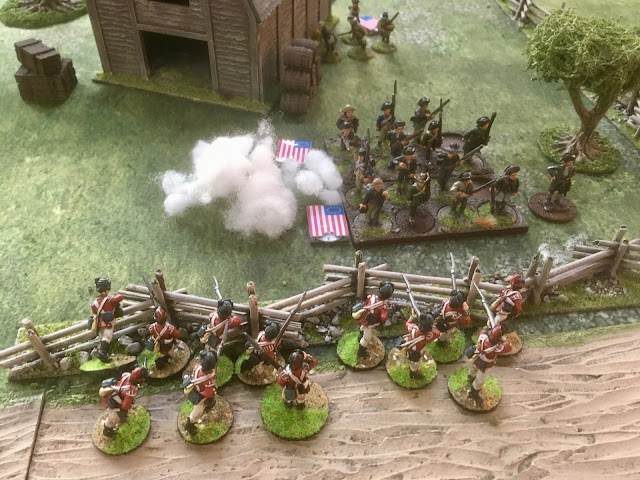 Remembering he is due to be partaking in a game of whist with some of the other officers from the 64th in the mess this evening, Captain Colfield orders his men to advance down the road and disperse the pesky rebels. Forward chaps, what ho! 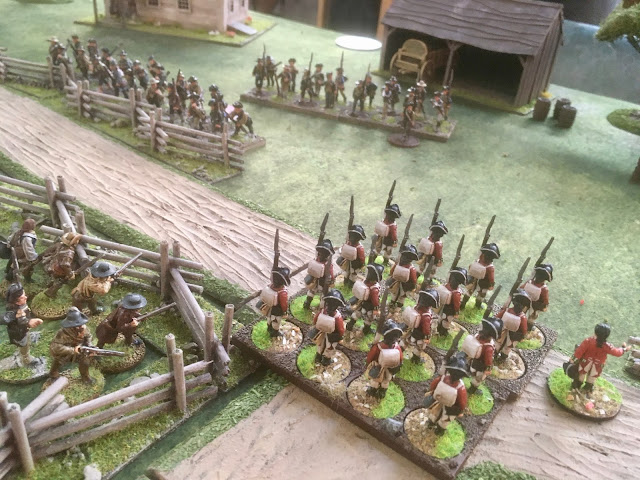 Sergeant Dagenham and his men pour musket fire into Lieutenant Quigley's State Militia - who are now in quite a state having accumulated a lot of Shock! 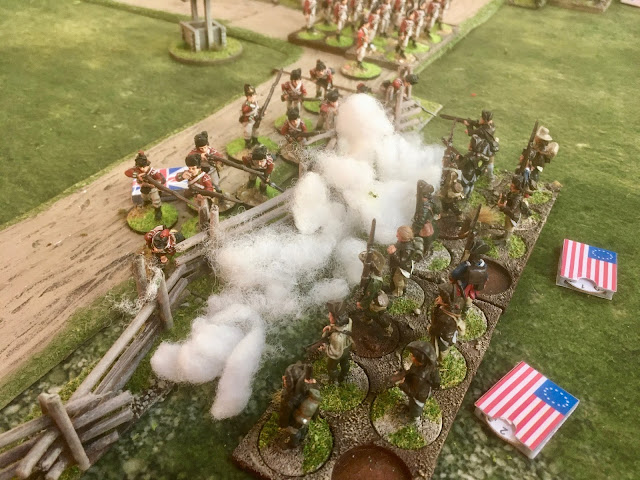 Thoughts of games of whist in his head, Captain Colfield decides that the bally Americans won't like it up 'em and orders his men in with the bayonet! Charge chaps! 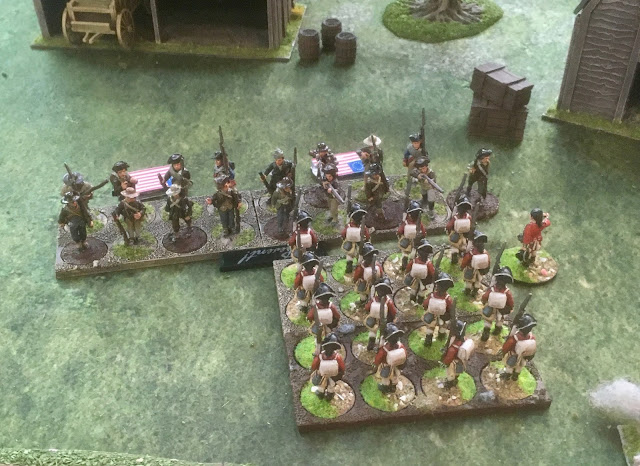 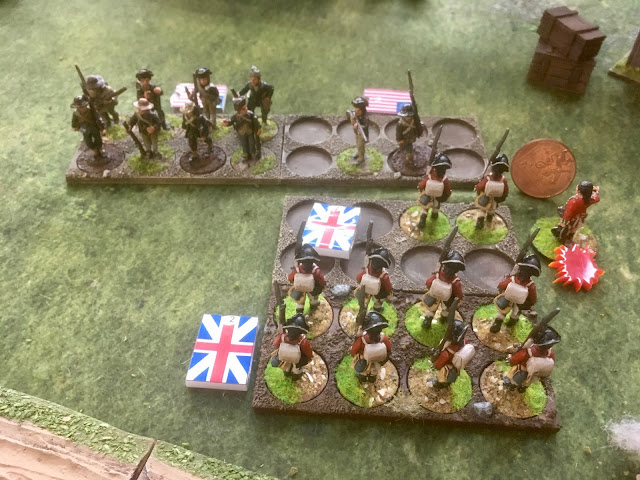 With equal numbers of casualties being caused another round of Fisticuffs is fought and this time the training, courage and pure righteousness of their cause sees the 64th victorious, although another brave redcoat makes the ultimate sacrifice for the King... 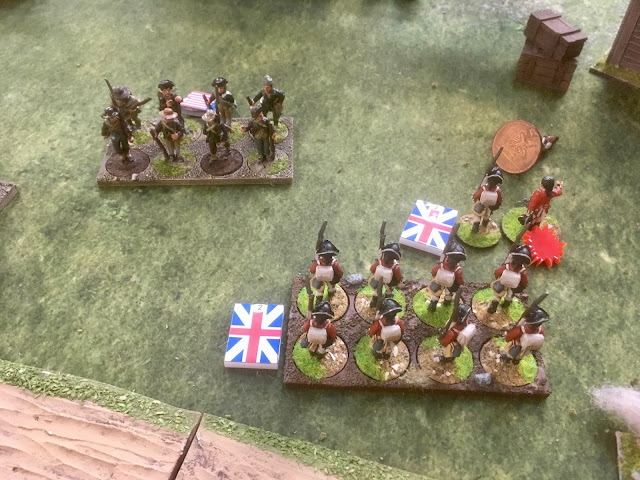 Their blood up, the remaining men of the 64th charge into the other Militia group who fall back dragging the unconscious William Quigley from under the bayonets of the brave British boys! 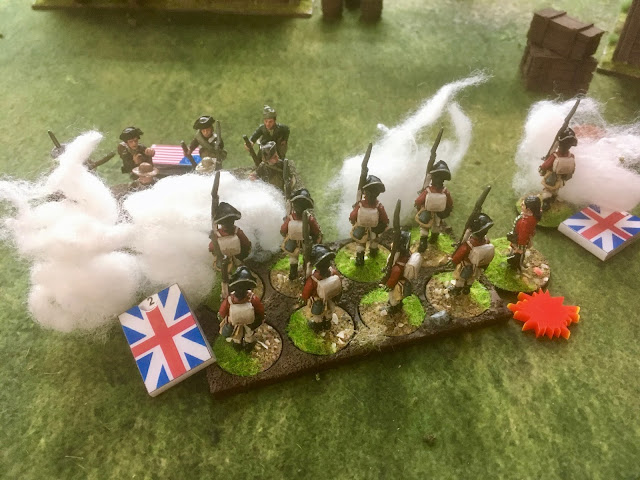 Lieutenant Dixon's loyal New York Volunteers fired a volley at the rebel militia to their front... 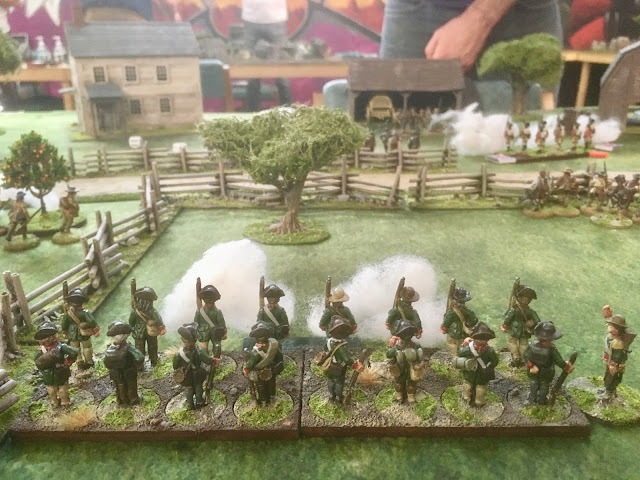 As Sergeant Dagenham's men fire another round into the New York State Militia of Lieutenant Quigley... 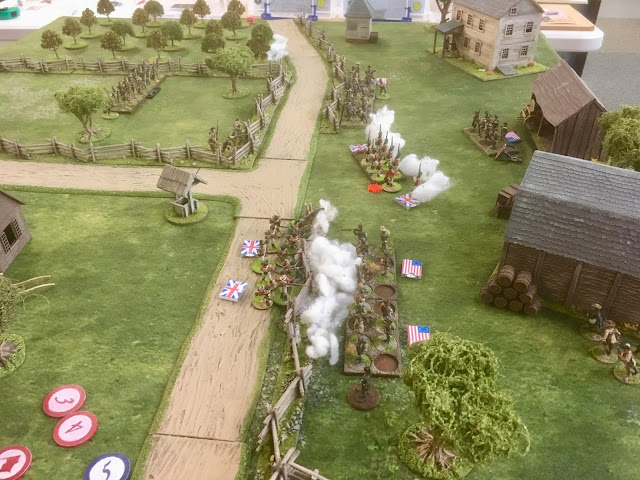 This is too much for the rebels. Their black hearts turn yellow and they break and run... 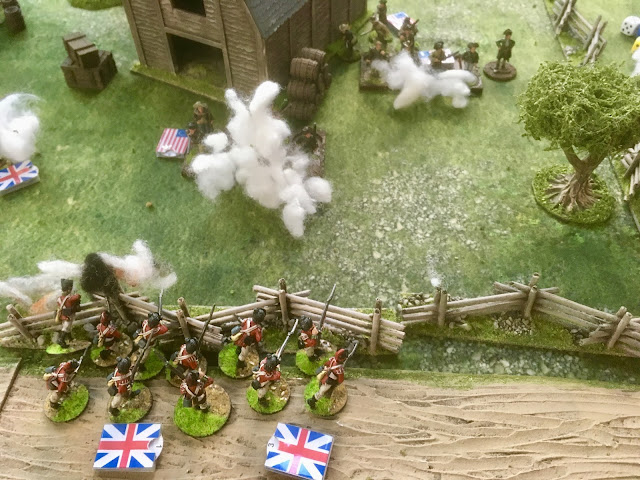 One group fleeing through the cowering skirmishers. Run Yankee, run! 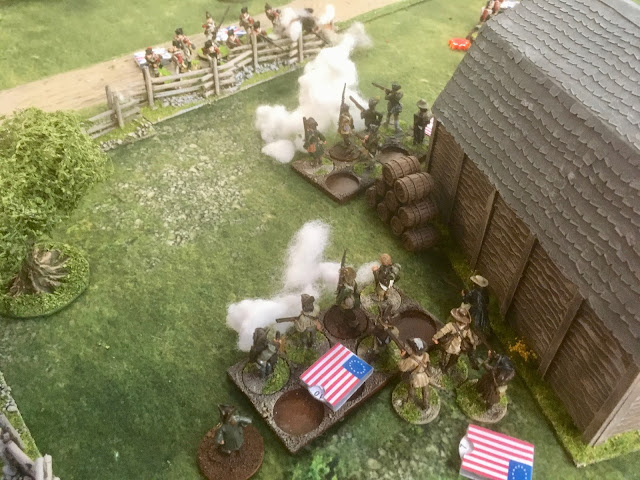 A final round of musket fire from the Tory Militia Skirmishers combined with a volley from the group of 64th Regular Line was too much for the remaining Militia under Sergeant Hawkins. They fall back and the Rebel Force Morale plummets to zero. The field of battle belongs to the Crown! 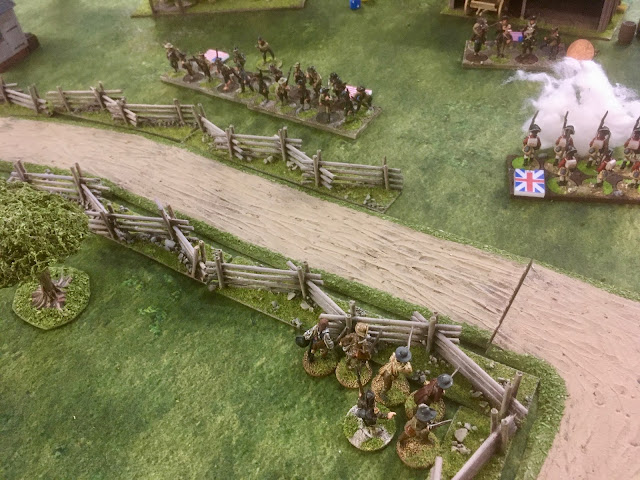 A decisive victory for the British, the aggressive tactics worked well and didn't give Andy time to move his rebels into position along the fence lines then snap into line and pour fire into the advancing redcoats. Clearly I was still in a Pas De Charge mode! :D
Discussing the scenario afterwards we came up with a couple of tweaks for the Virtual Lard games and they saw a marginal British win in one game and a solid American win in the second.
Posted by Steve at 09:10:00