The Men Who Would Be Kings: Wet an' Drippin' by the Ford...

Our latest game of The Men Who Would Be Kings was an odd one as it was meant to be a game of Rebels and Patriots and Jim at BIG had set the table up for us to play the Widow Creek Bridge scenario from it. Unfortunately George had left his Redcoats at home, but as his Afghans were encamped in a locker at BIG, we moved the scenario forward 100 years and from America to Afghanistan...

In the wooded hills above Kabul the tribes mass... 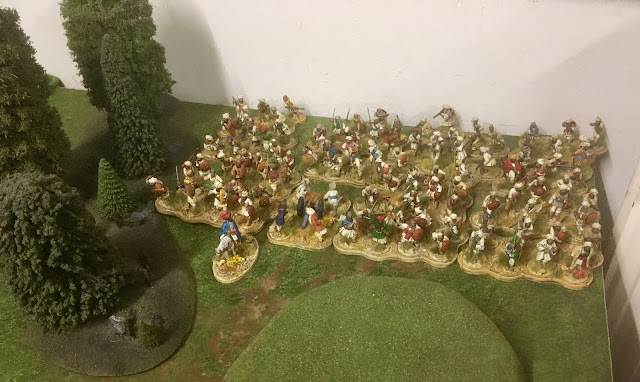 Below a detachment of the 15th Sikhs and some friendly Tajik irregulars guard a bridge across a tributary of the Kabul River. 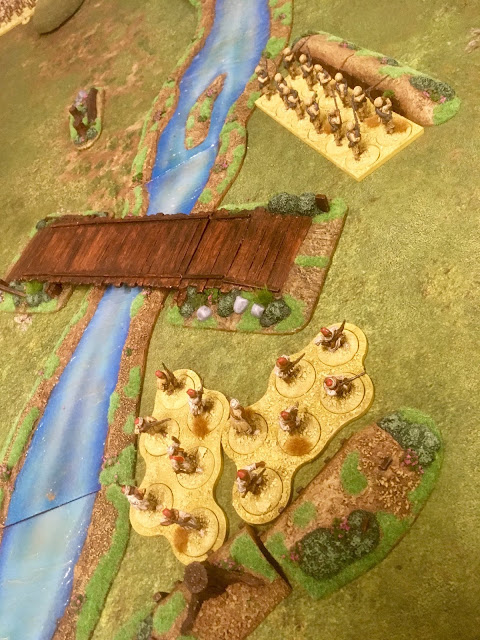 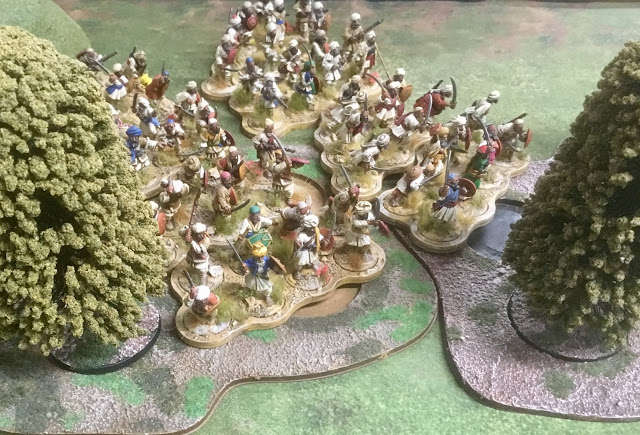 Advancing on the Sikh position!

Normally we don't allow infantry to form Close Order in fortified positions, but given the scenario has a small force awaiting reinforcements, we allowed it this time. 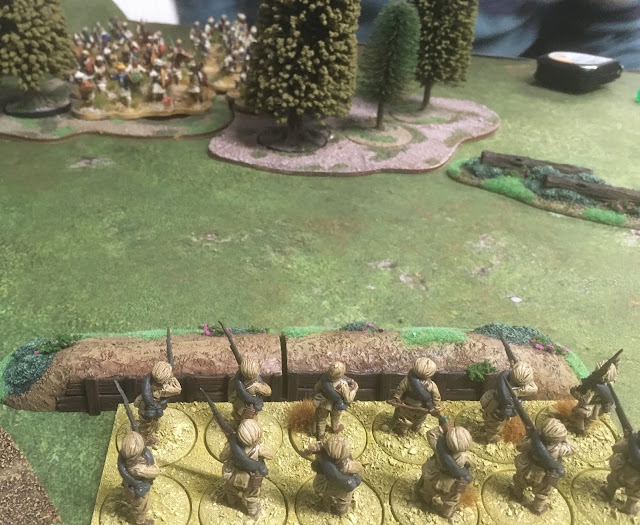 The first of the Ghazis charge in, losing a number of warriors but killing one of the Sikhs. 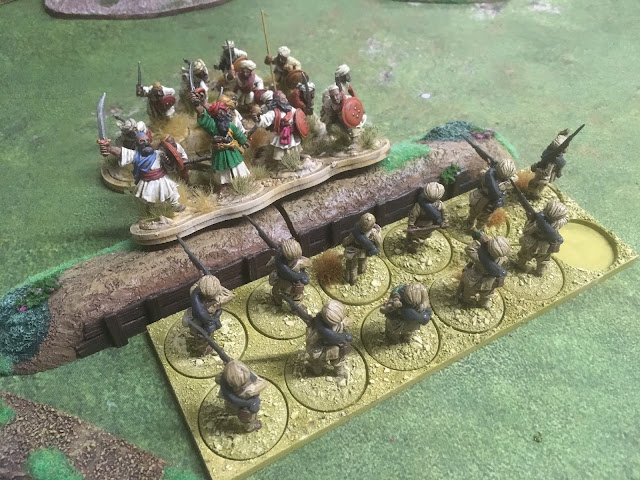 Another couple of charges are beaten back with Ghazi units taking Pin markers, but more of the brave Sikhs fall to the enemy! 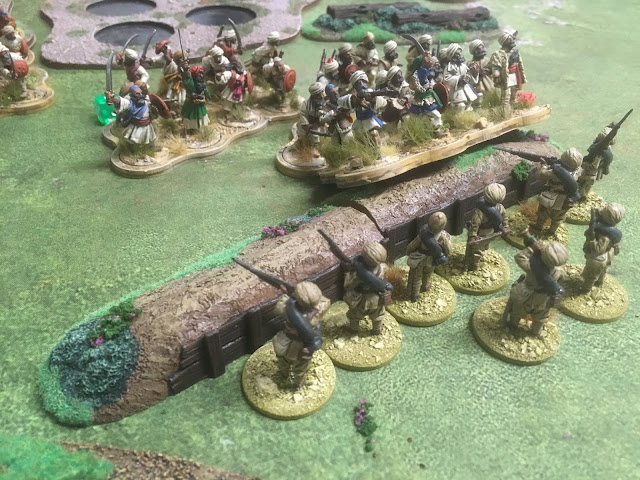 But hark! The sound of reinforcements to the rear. It is the 66th Berks! 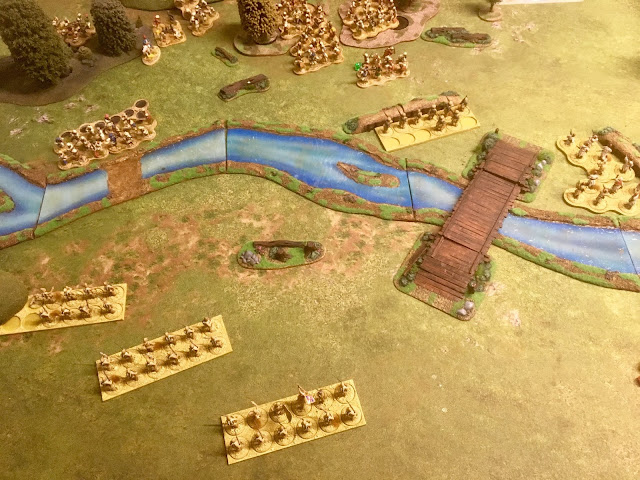 However as they advance towards the bridge and their Skih comrades they come under fire from units of Afghan Irregular Infantry... 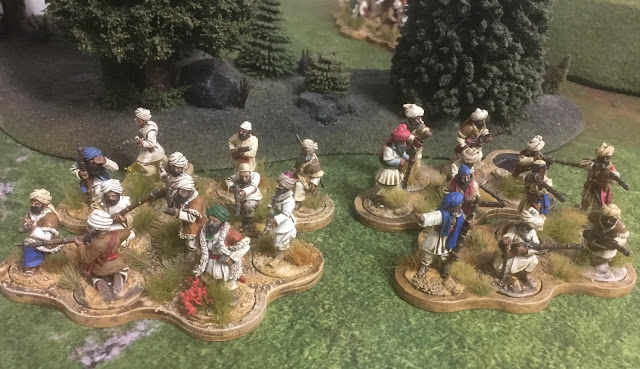 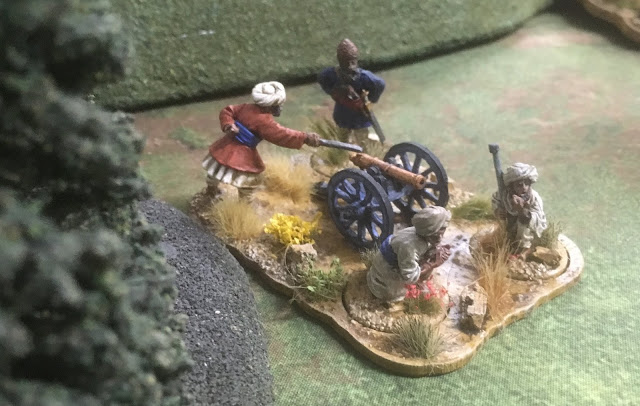 The Ghazis launch another charge at the 15th Sikhs, who now being at half strength lose the advantages offered by being in Close Order (+1 on melee and restricting number of enemies who can engage you). 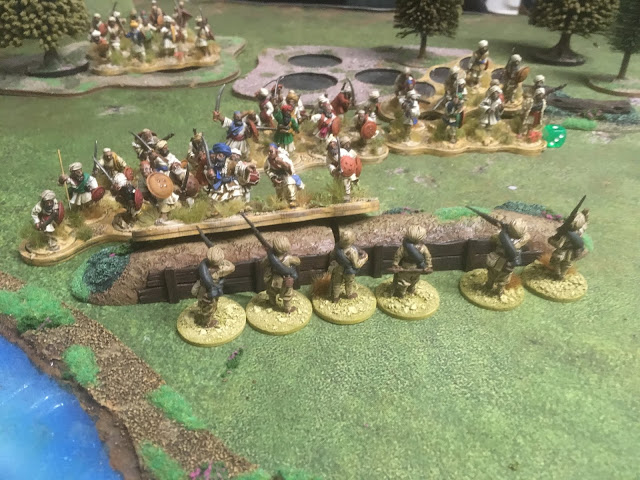 The inevitable result saw the Ghazis carry the Sikh position... 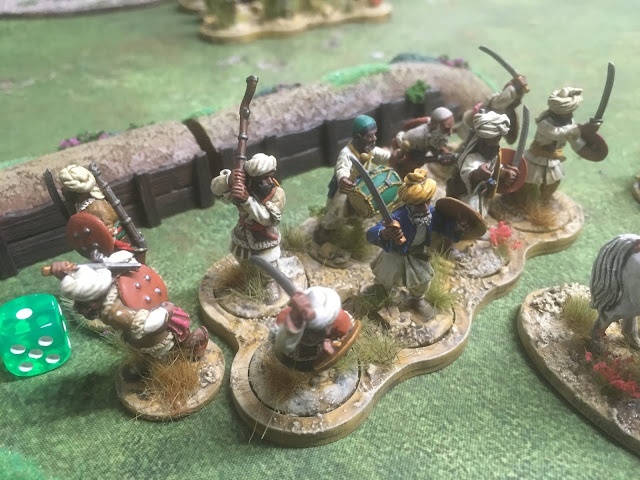 ...killing all the detachment of the 15th apart from their officer. 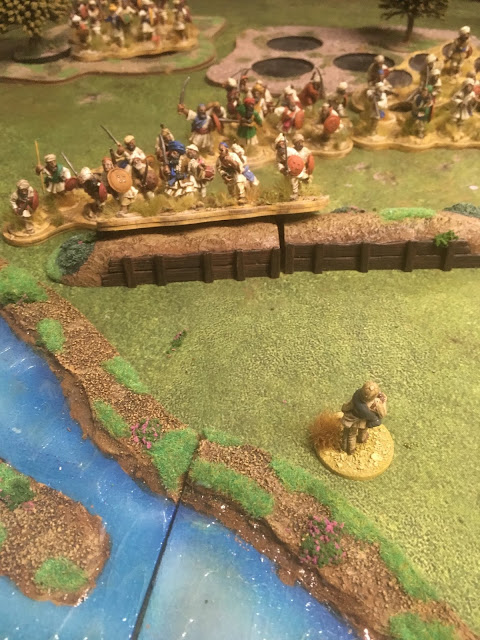 Pulling out his pistol he bravely makes a stand against the Afghan horde on the bridge - a Victorian Horatius! 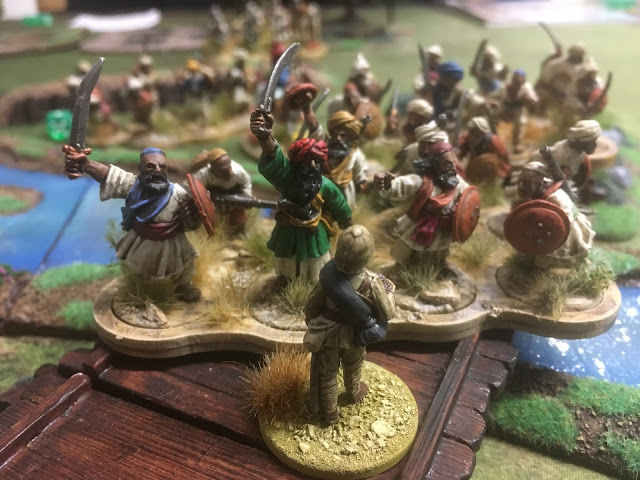 Unfortunately, unlike his Roman predecessor he was unable to hold the bridge against the enemy horde! 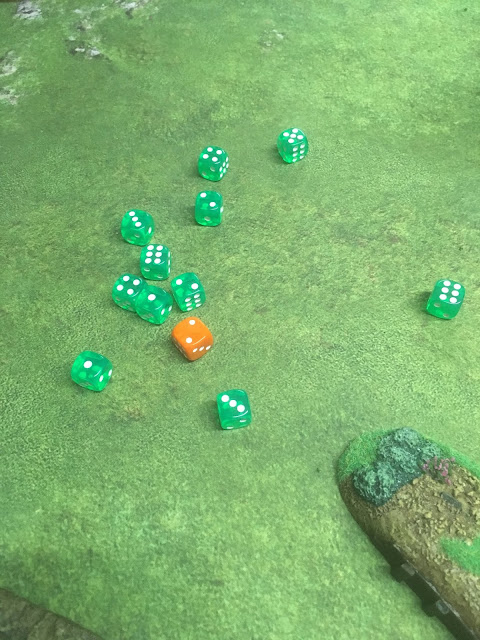 The Ghazis then attacked the Tajiks, who got some shots off... 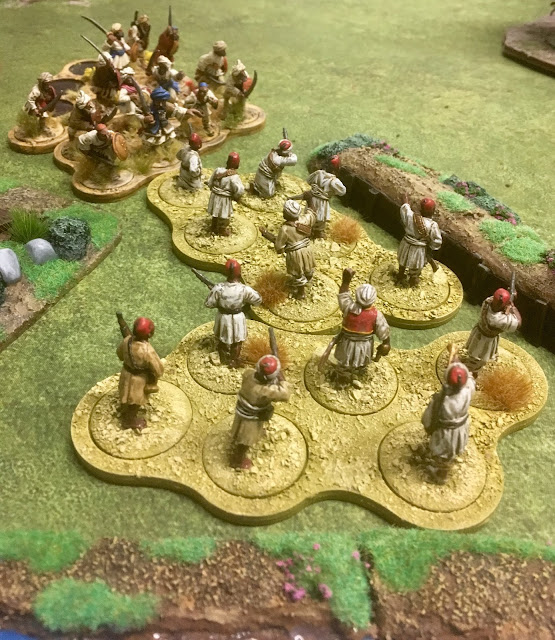 ...but fell under the the Afghan tulwars and took a Pin marker. 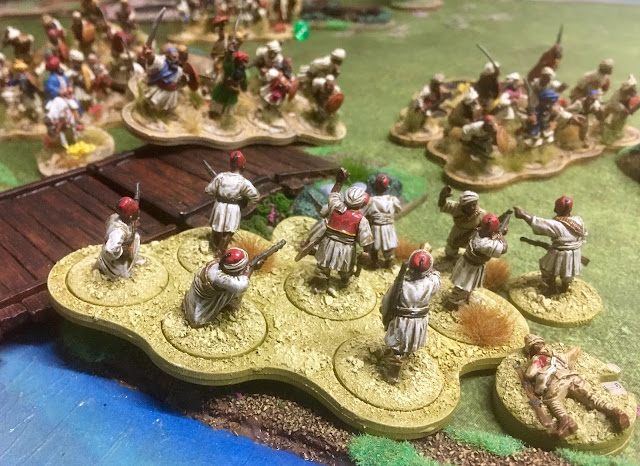 They did manage to fall back to the bridge... 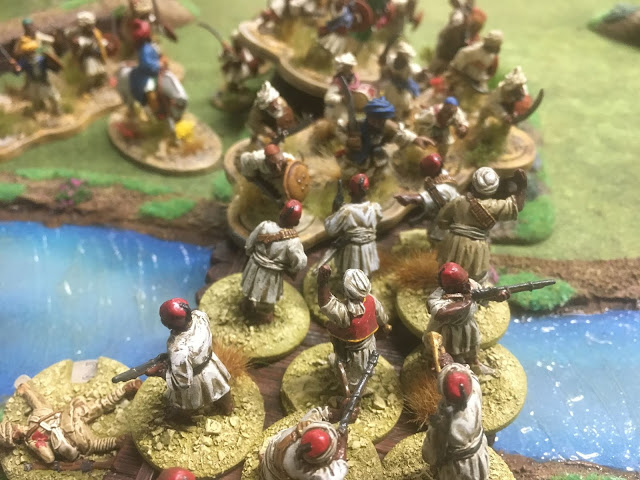 But as the 1/66th reached the bridge, the Tajiks fell to the Afghan attack. 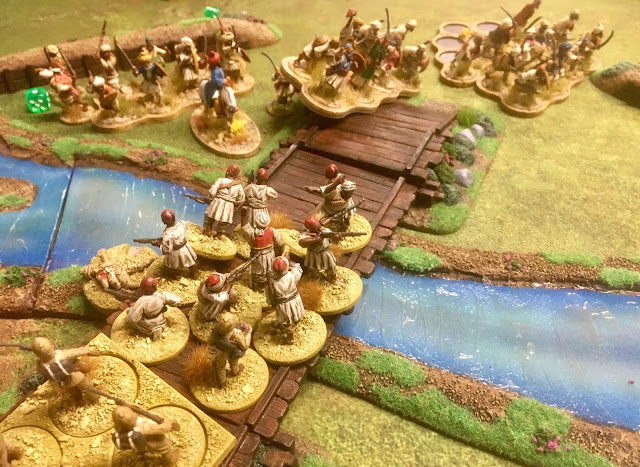 This unnerved the brave boys in Khaki who failed a Morale check and took a Pin marker - disaster! 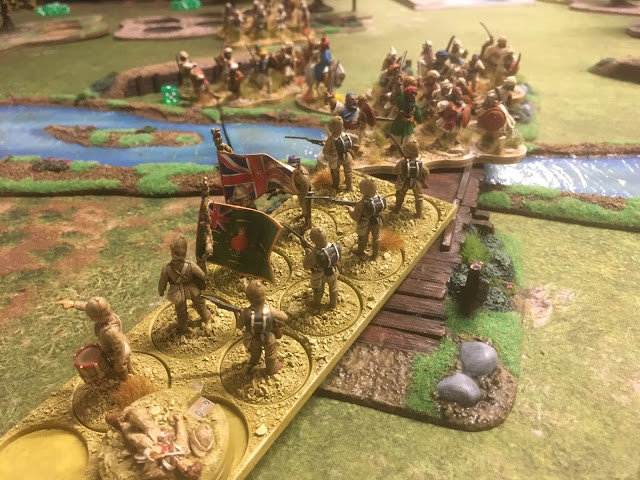 The Ghazis charged across the bridge into the Pinned British, who because they were Pinned could only fight back at half strength! 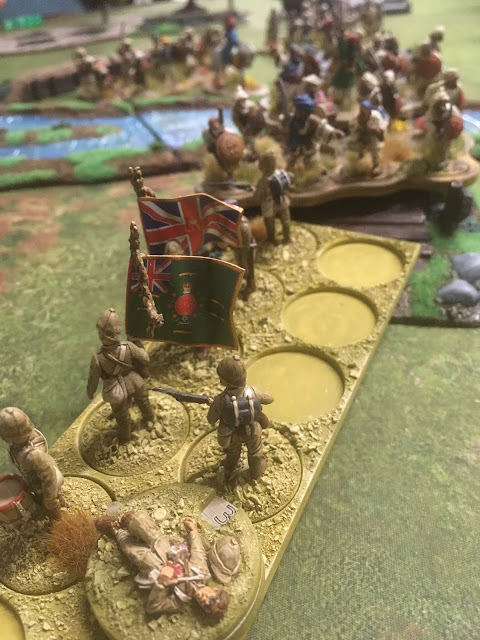 The result was inevitable and the Afghans took the bridge, almost wiping out the 1/66th... 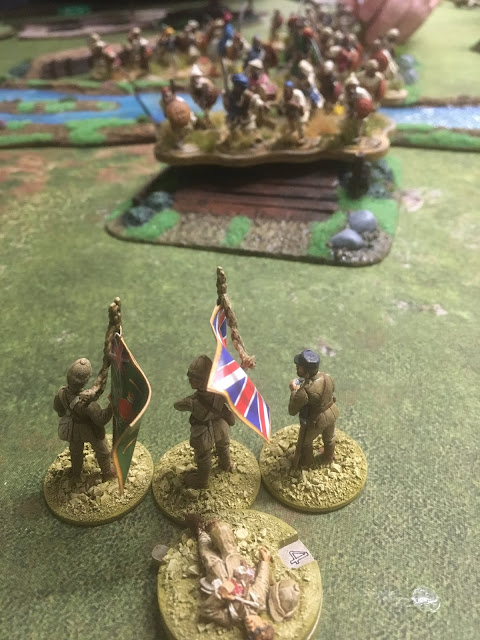 On the Imperial left, the two units of Irregular Infantry went up against the 3/66th in a firefight over the river's ford. 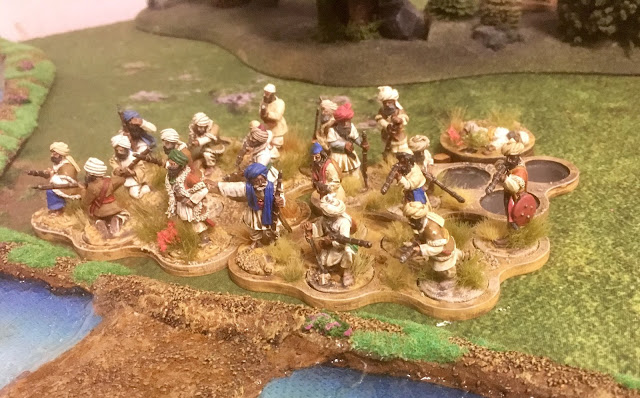 The pesky accuracy of the Afghan rifles (hitting on 6, unlike British 5 or 6) inflicting a couple of casualties and the 3/66th failing a Morale test and becoming Pinned (my Morale tests were abysmal this game). 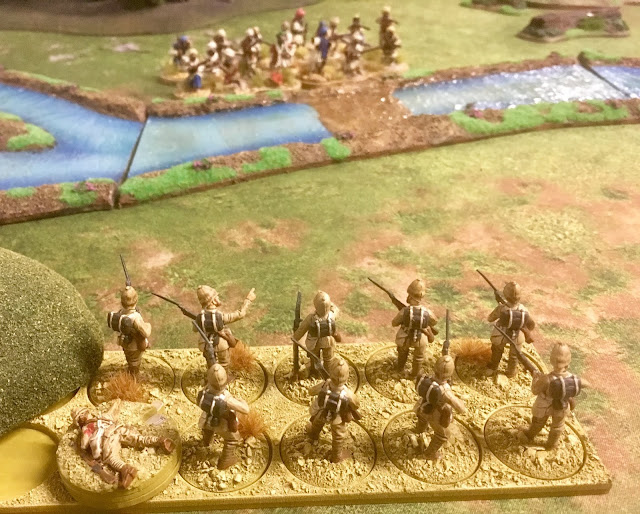 The firefight over a couple of turns saw the 3/66th down to 25% strength and Pinned. 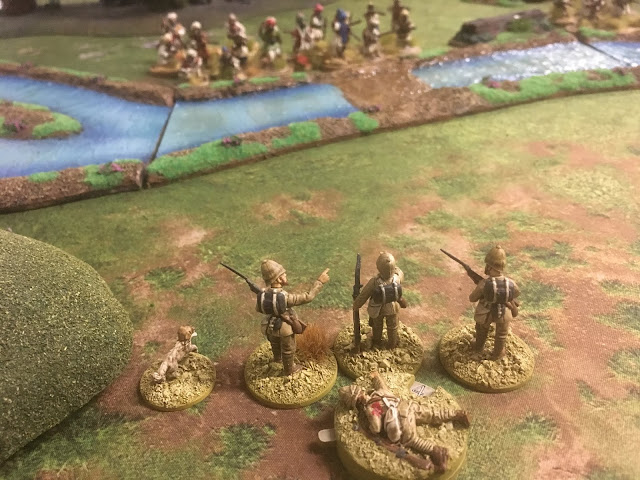 The vultures circle the battlefield, their view showing the disastrous British position... 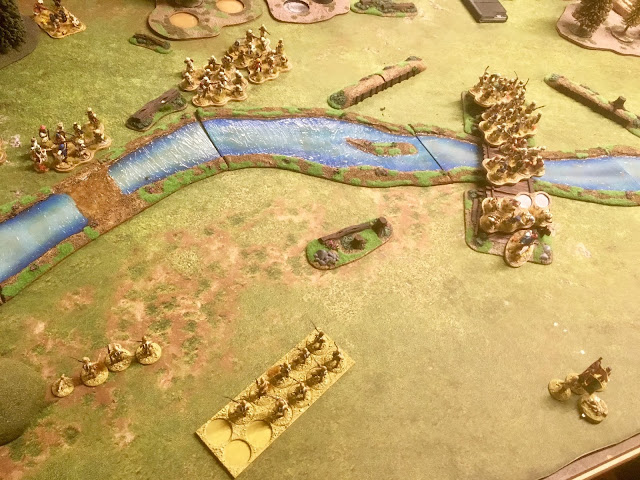 Unable to hold back the Afghans the remnants of the 66th Berkshire retire from the battlefield, leaving the bridge under the control of the wily Afghan Emir. 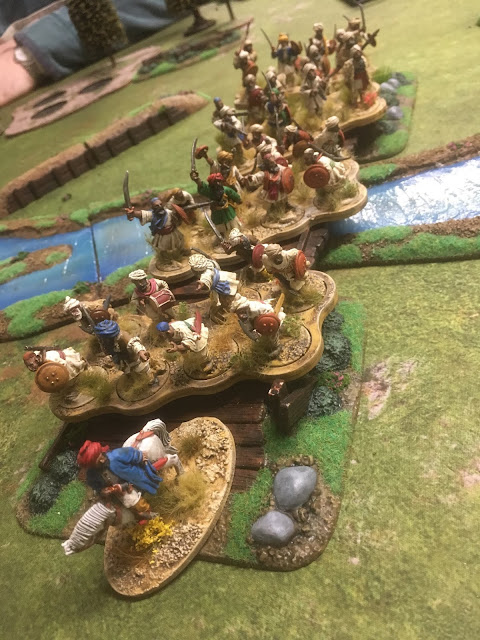 Another defeat for the Imperials forces in Afghanistan, but a fun game. Whilst the report may seem one sided things may have gone better if the 66th had not failed a number of orders to Advance, reaching the bridge earlier allowing them to hammer the Afghans with Martini-Henry fire, or take Pin markers so easily. Curse the gods of dice!

Email ThisBlogThis!Share to TwitterShare to FacebookShare to Pinterest
Labels: C19th Wargaming, Colonial wargaming, The Men Who Would Be Kings