I do have a small pile of ARR's to write up from our games at BIG the last couple of months but yesterday I went along to Big Winter Wonder Lard, a day of Too Fat Lardy games played at BIG organised by David Hunter. There were ten different Lardy games put on, with a wide variety of their rules in use, each attendee getting the chance to play one in the morning and one in the afternoon.

The morning session saw me and two others (Tom and Chris I think, I'm hopeless at remembering names) play Hermitage del Único Ermitaño, a Sharp Practice game run by Leigh Jackson, set in the Eastern Peninsular with a force of Spanish regulars and guerrillas attempting to overrun a French outpost.

The guerrilla skirmishers attempted to snipe a few French from the cover of the Hermitage's vineyards... 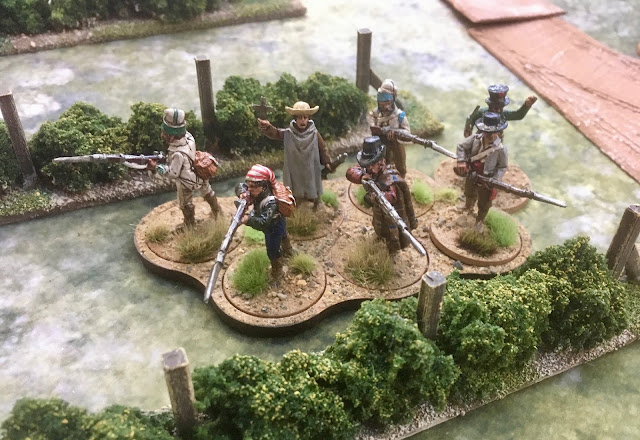 The French though proved to be the better shots... 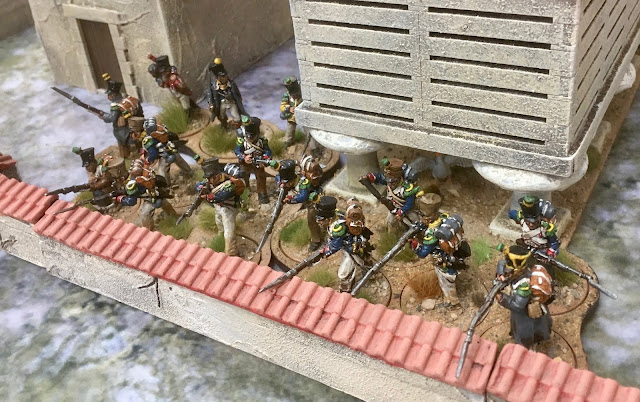 ...killing two guerrillas, inflicting Shock on them and wounding their leader! 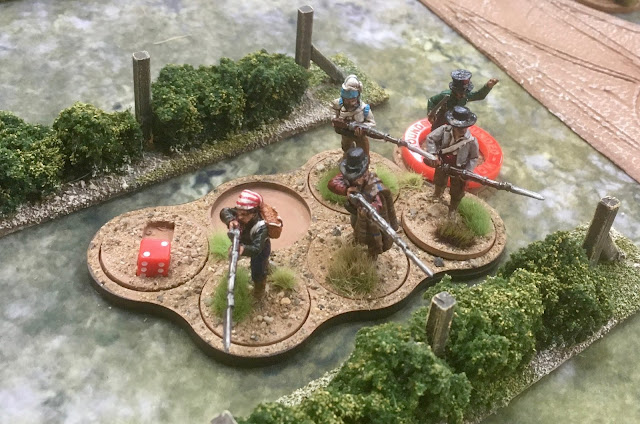 But don't worry Los Guerrilleros, the Regulars are here to defeat the hated French! 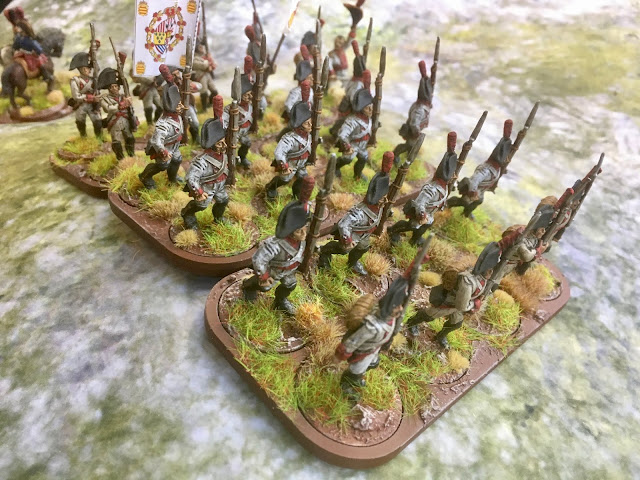 Then even more Line infantry turned up to advance on the hermitage... 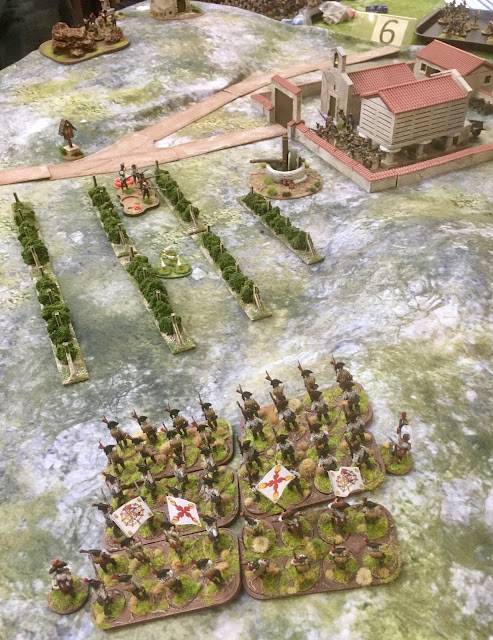 And some Cazadores who deploy into the vineyards near the shaken guerrillas! 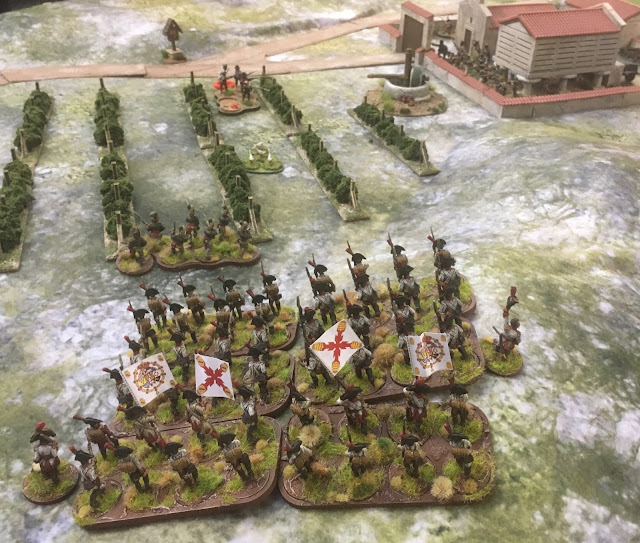 But hark! What is that noise from the main road? With a cry of Vive Le Vodka! a Polish relief force, intent on rescuing their French comrades in arms from the clutches of the Spanish guerrillas arrives! 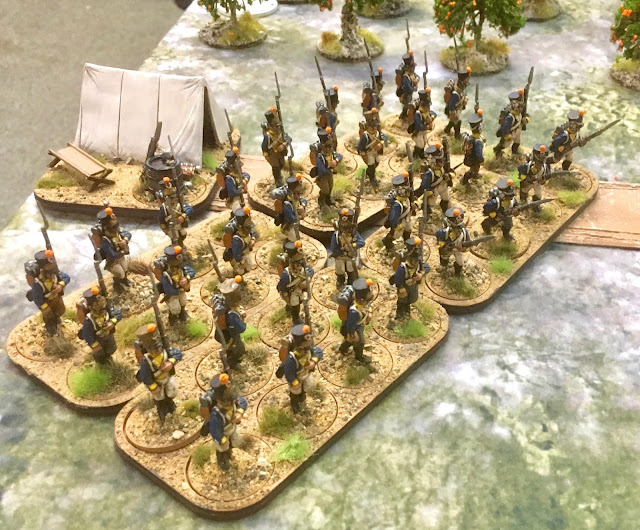 With the sudden appearance of the Poles on their flank, one unit of Spanish line swing around to face them, whilst the other maintains its advance on the Hermitage. 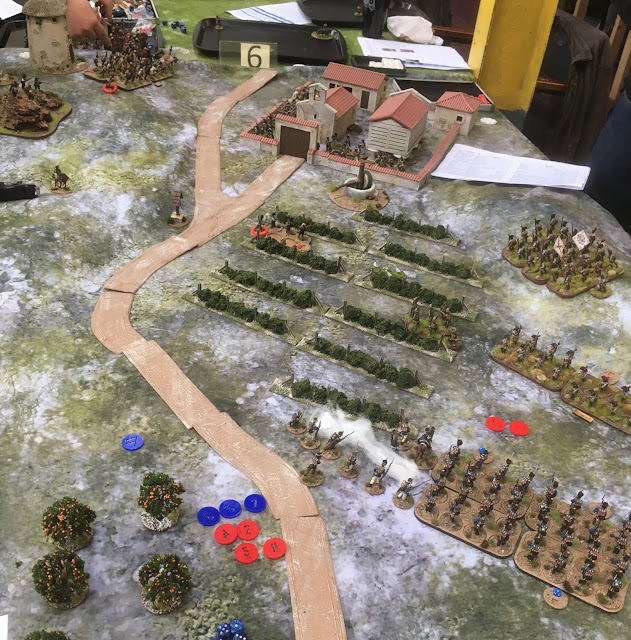 The Spanish nervously Present to the oncoming Poles in the hope a devastating volley will halt the enemy in their tracks! 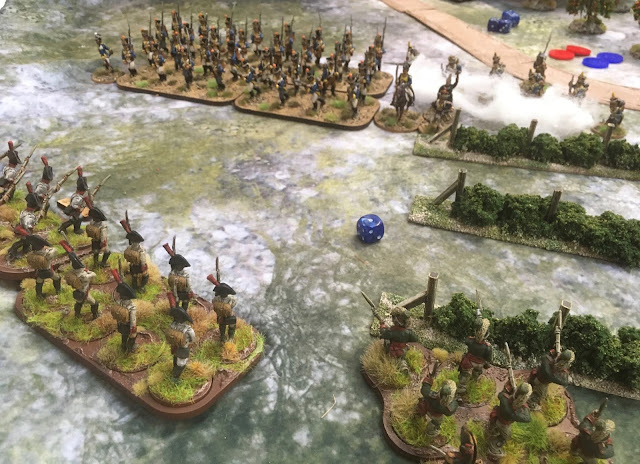 The volley blasts out! A handful of Poles fall to the hail of musketry and some Shock is inflicted... 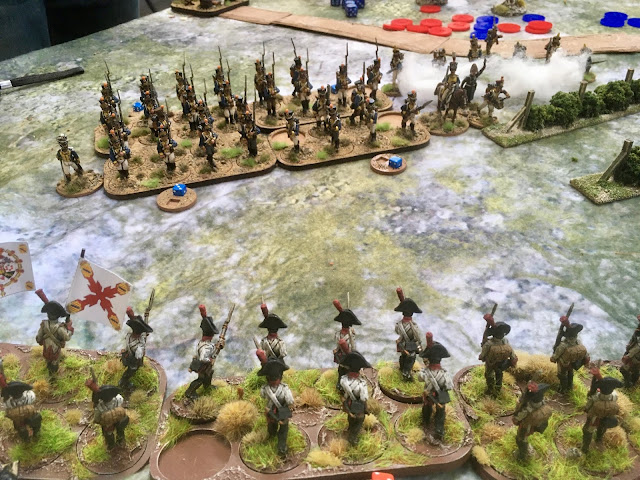 But not enough to stop the Aggressive Poles charging the Spanish Line... 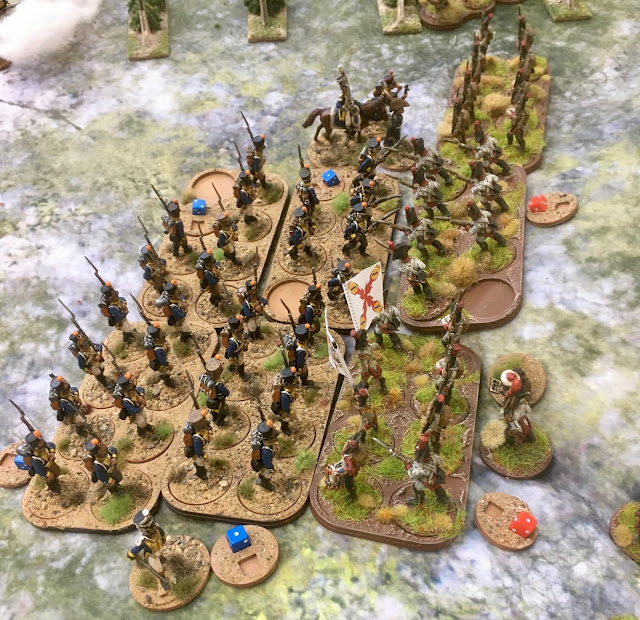 With predictable results as the unit breaks and runs away with lots of Shock markers! 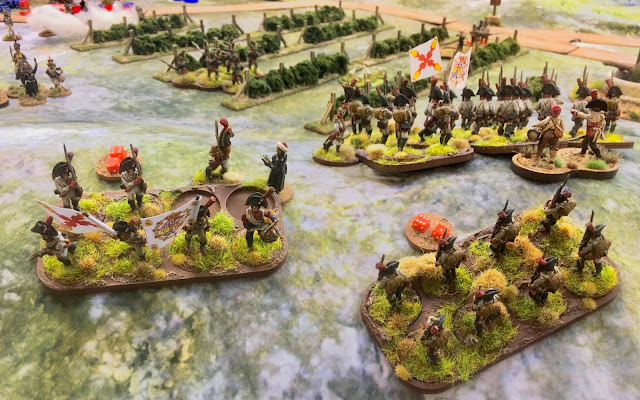 But what is this? The cunning Spanish had deployed a cannon loaded with canister behind their line infantry and this opens fire on the advancing Poles! 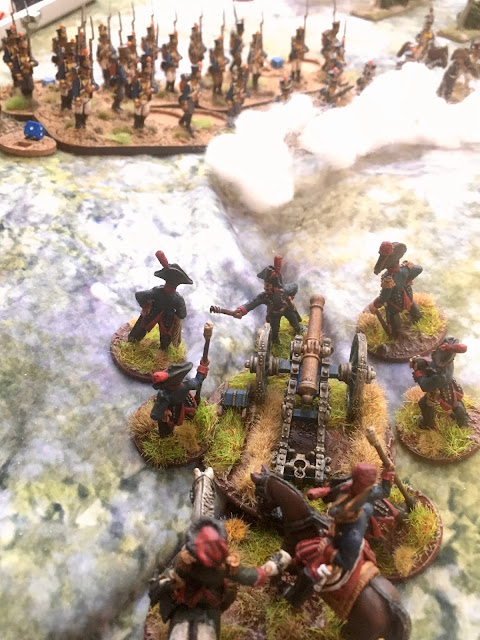 Then the Cazadore skirmishers hiding on the vineyard open fire on the Polish flank and then charge in! 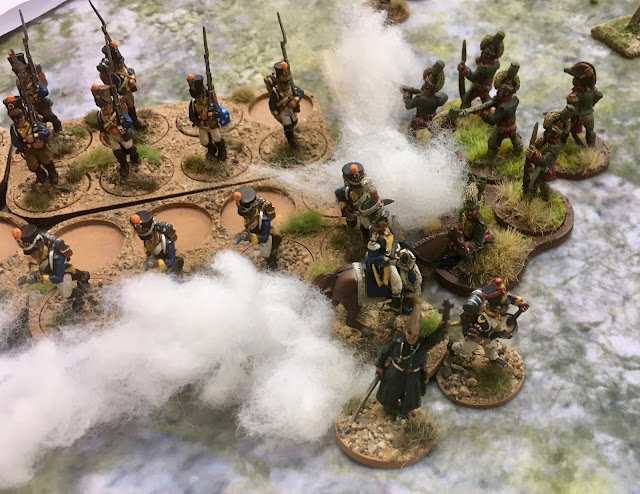 The Polish are defeated! Most of them are them are killed and half the remaining, with the Polish Leader, flee from the brave Spanish Cazadores! 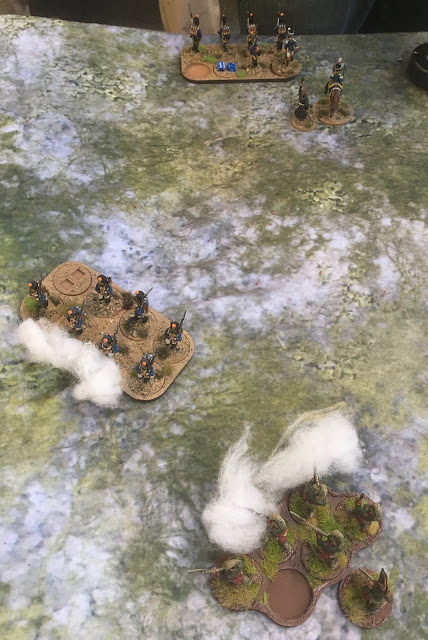 The remaining Line unit now continues its advance on the Hermitage... 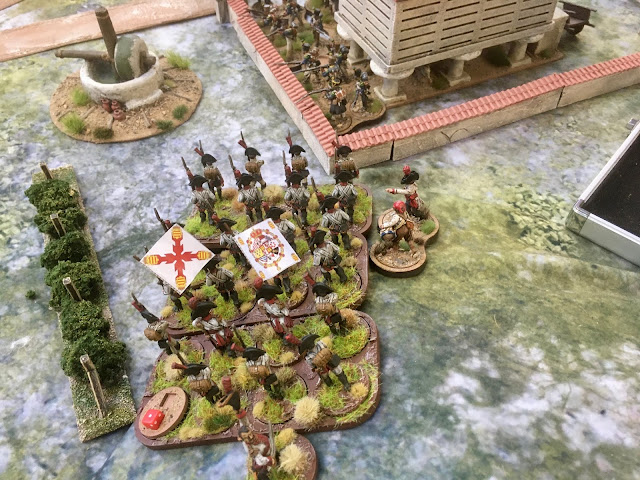 And guerrilla units charge down the hill! 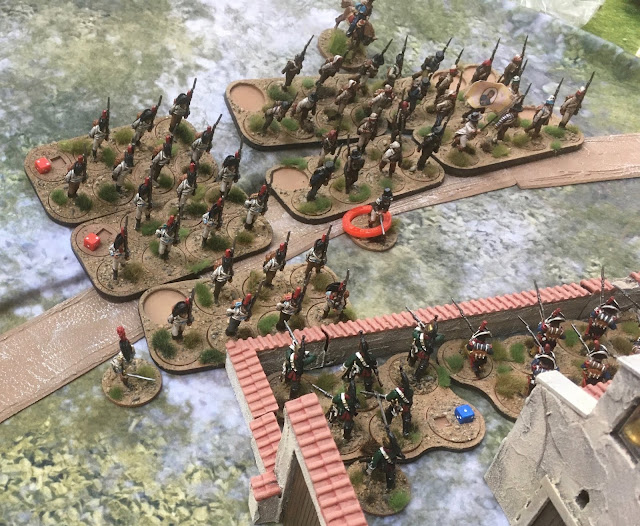 The end is nigh for the French as the guerrillas storm the walls... 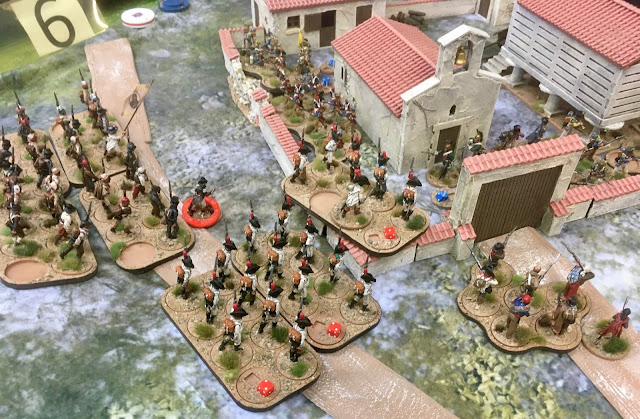 ...and a unit of Spanish Guerrilla cavalry charge down a handful of remaining Polish skirmishers. 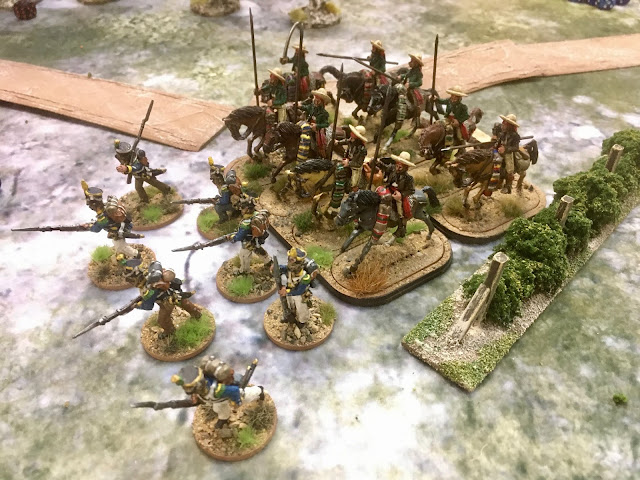 With the Spanish in the hermitage, the French on one side collapse and flee, reducing the French force morale to zero. 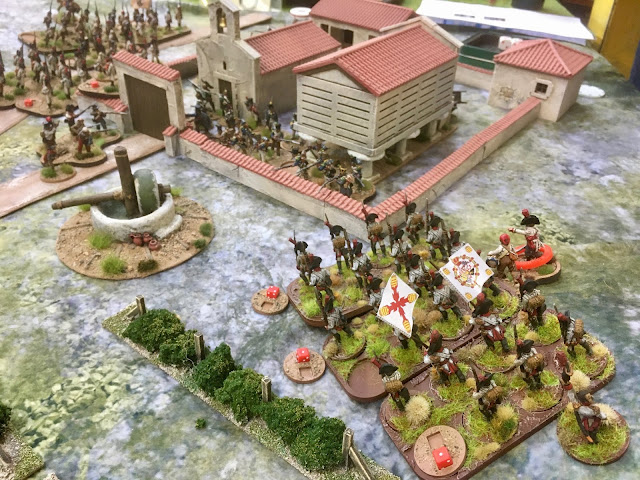 Thanks to Leigh for putting on such a great game, I really enjoyed it. Even on a six by four table with around 100 points of troops a side it did not feel crowded and the game felt balanced until the Polish relief force was shattered having been distracted by the Spanish line and attacking them, and into the  mouth the Spanish cannon, rather than advancing straight down the road to the Hermitage (though that would have opened their flank to the Spanish regulars).

As stated there were a lot of Lardy games being put on, including Kiss Me Hardy!, which looked a lot of nautical fun... 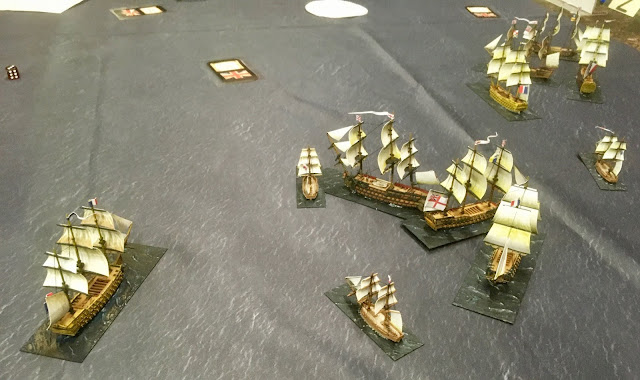 In my next post I'll report back on my first game of Chain of Command as the Fallschirmjäger invade Crete!
Posted by Steve at 13:26:00