The Men Who Would Be Kings: For You Broke a British Square!

Dice eh? What can you do? I was reading some other gamers posts about how on odd occasions one player's dice rolling can be so bad, that there is little enjoyment to be had from the game for either player. I'm not sure who George felt about our most recent game of The Men Who Would Be Kings but for me it was quite disheartening.

I suggested we try the 'It's Awfully Quiet Out There...' scenario again as I was convinced I could do better than the last time we played it by using a force with some more mobile elements in it, I wasn't suspecting I'd do a whole lot worse!

The game started with the Mahdists attacking from both flanks, one side several Rubs of Dervishes and River Arabs... 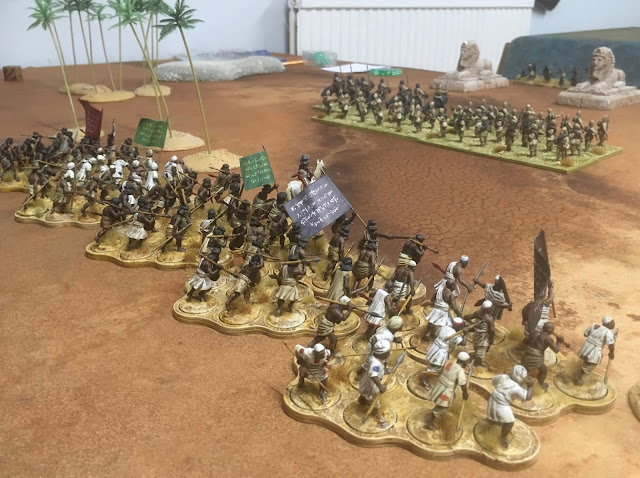 The other flank a couple of units of those pesky Irregular rifles who started the game by sniping at the 66th Berks and Bengal Lancers, inflicting a casualty on each of them and seeing them both fail their Morale checks and end up Pinned! 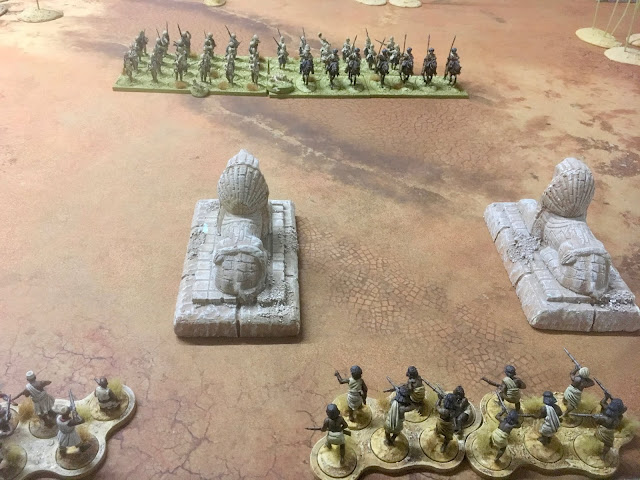 And just for the hell of it the Madhists employed a cannon! 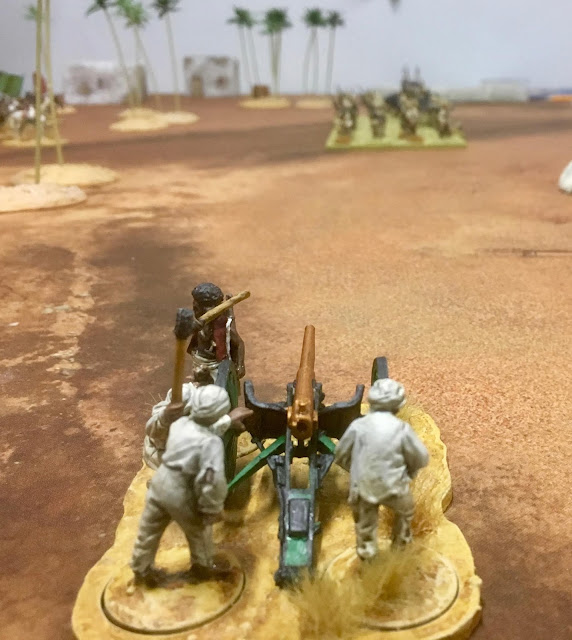 The British loosed one volley at the advancing natives, killing a number in one group and Pinning it. 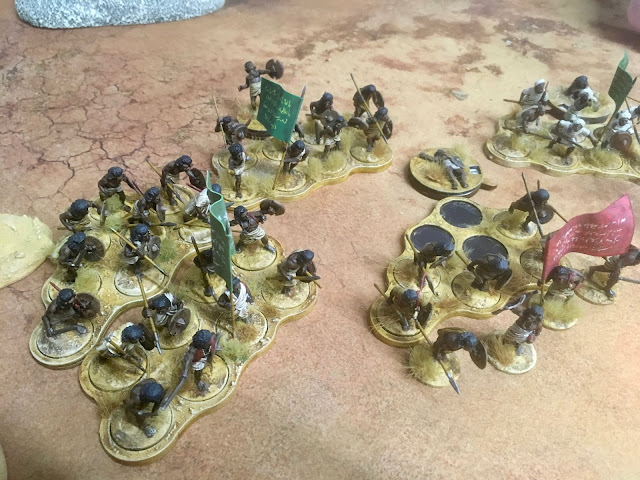 The next turn they were whittled down further but unfortunately I failed to wipe out one group which would have forced Morale checks on neighbouring units and may have Pinned one or two allowing the Imperial rifle fire to stem the native flood... 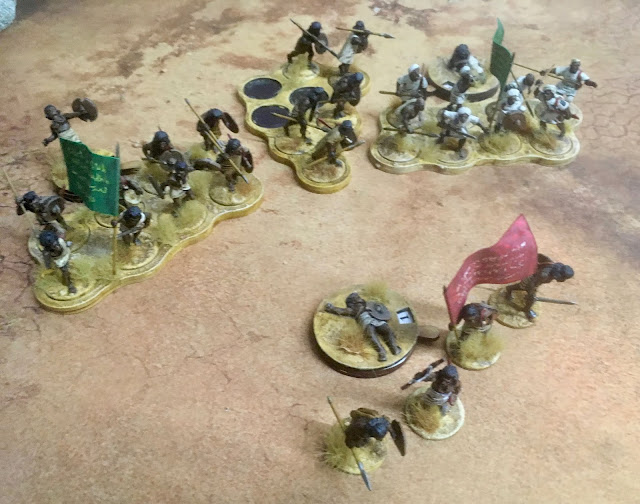 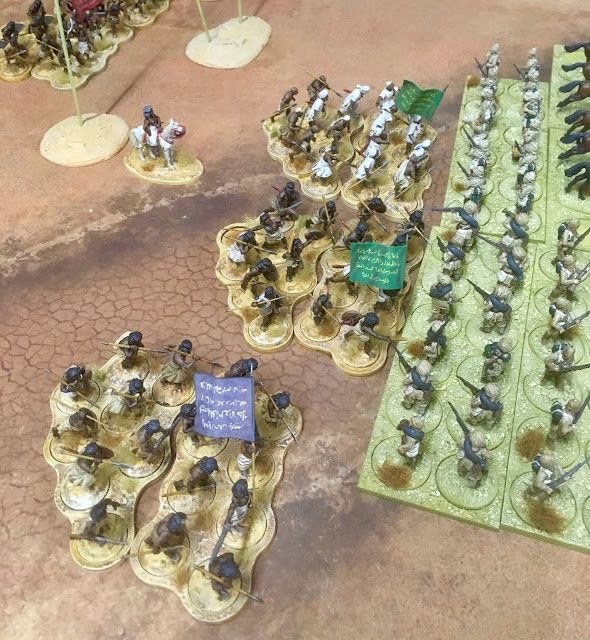 At this point I knew this wasn't going to be my evening as George killed 11 of the 12 Sikhs with 16 dice rolls in just one attack... 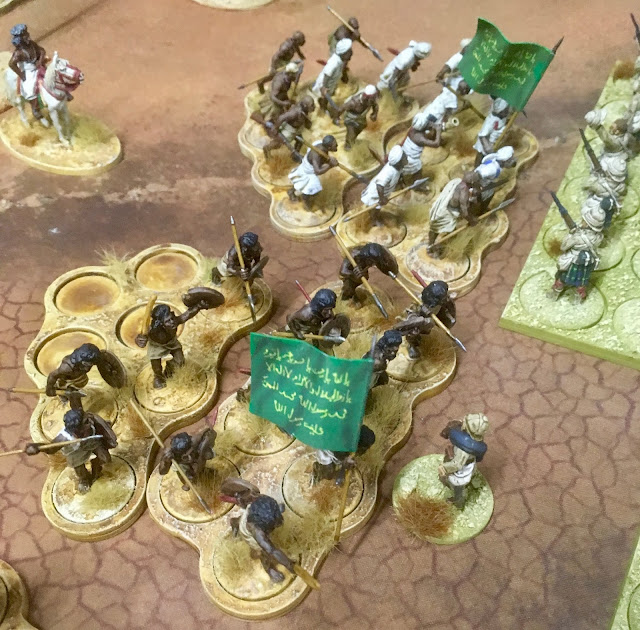 He then followed that up with the River Arabs killing all 12 of the Highlanders in just one round of Melee! 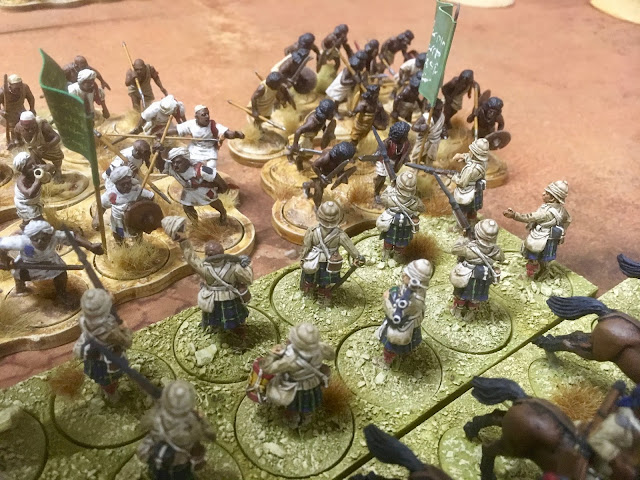 So less than three full turns into the game, George had wiped out half my army and Pinned the other half with rifle and cannon fire from the other flanks - we had only been playing 20 minutes! 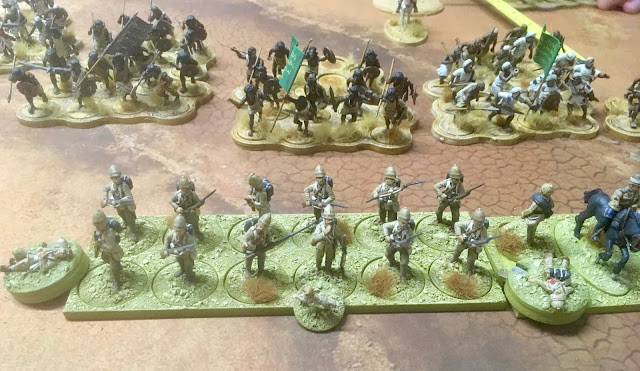 I did manage to Rally the Bengal Lancers who embarked on a forlorn mission to save the day by attacking the enemy... 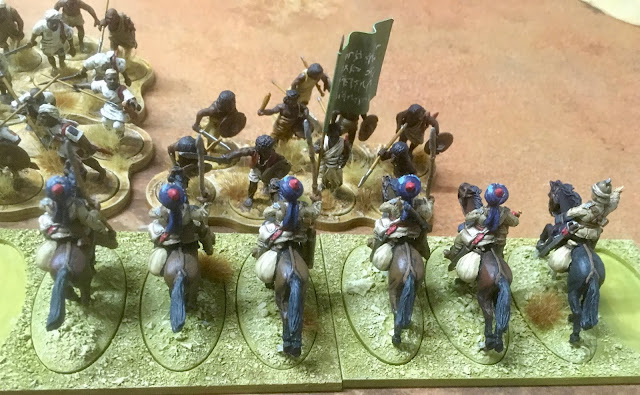 Cavalry aren't best employed in the game by attacked full strength enemy units armed with huge swords and spears but the Lancers did have some success, albeit at a price... 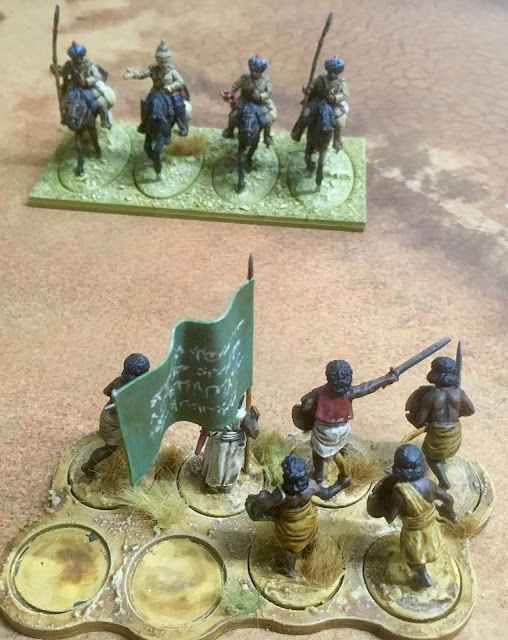 Charging one unit of Dervishes down! 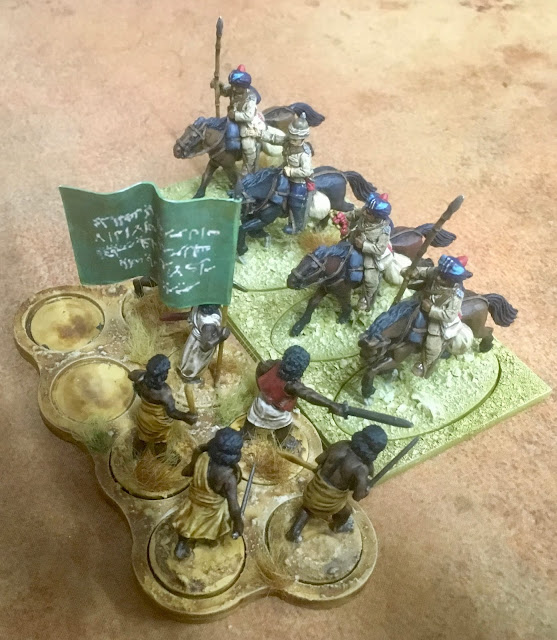 And in two turns of Melee wiping them out, though at a cost of half the unit! 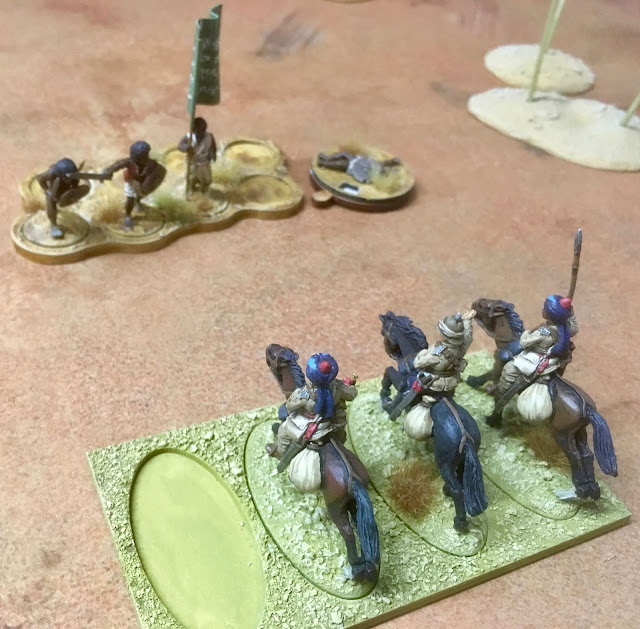 This merely delayed the inevitable as elsewhere the Mahdists charged into the remaining infantry unit... 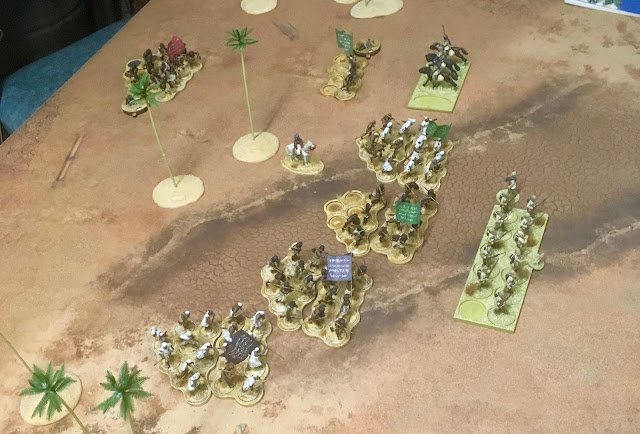 Killing 2/3 in one round of hand to hand combat and Pinning it... 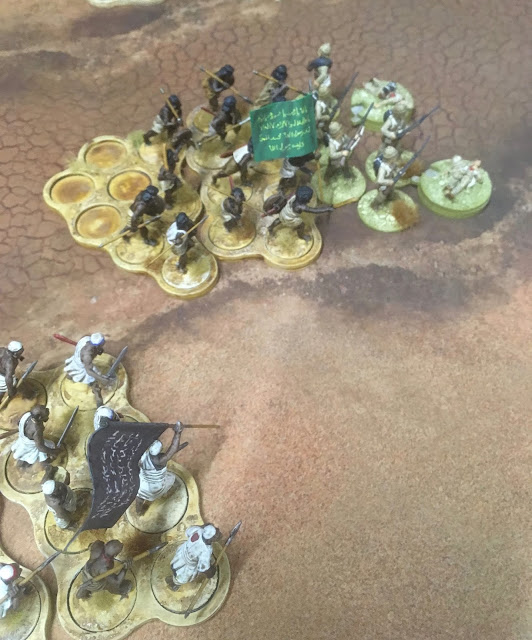 Before wiping it out in the following turn!

Well that was our shortest game of The Men Who Would Be Kings, a little over a half an hour. What went wrong? It was a bit of a perfect storm, but the scenario does start with the natives attacking and George was in shooting range before I even threw a dice! That he inflicted casualties and the resulting Morale check saw the 66th Foot and Bengal Lancers Pinned (and therefore unable to do anything except try and Rally the next turn not attack the Irregular rifles) threw my battle plan to fall back towards one table side and threaten George's flank with the cavalry straight out the window. The subsequent destruction of the Highlanders and Sikhs in one turn of melee combat was just the icing on the cake.

We had a chat about all this before George suggested we replay the scenario with the British formed in Close Order in a square (technically the rules don't include squares, but Close Order provides benefits of improved firing and limiting the attacker in numbers employable in melee combat. 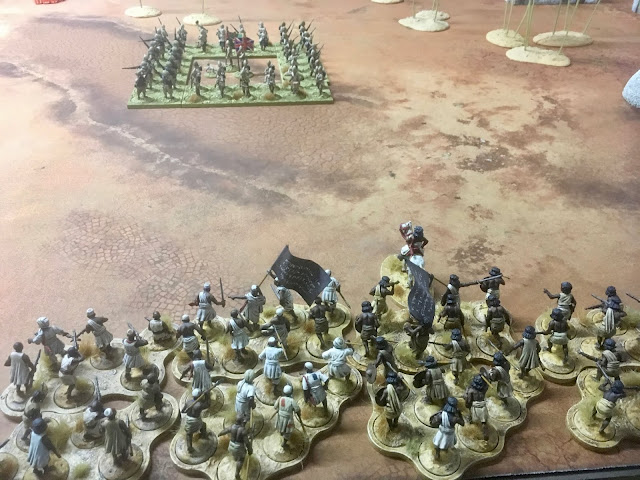 Unfortunately this didn't work well either as once again George's pesky Irregular rifles killing two of the 1/66th. As was the way of things I failed the Morale check with yet another low dice roll, the unit was Pinned and automatically fell out of Close Order. 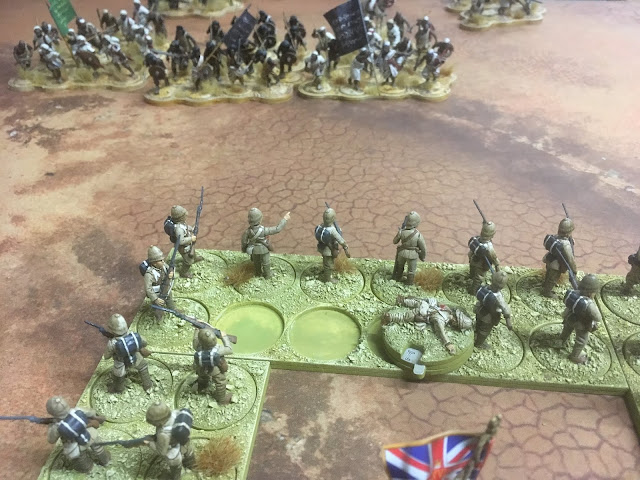 With the side facing the attacking Dervishes Pinned, I attempted to move the rest into line to face the enemy (Close Order troops restricted to a 180 degree firing arc). The 2/66th started to swing around whilst the 15th Sikhs and 92nd Highlanders refusing orders to move! 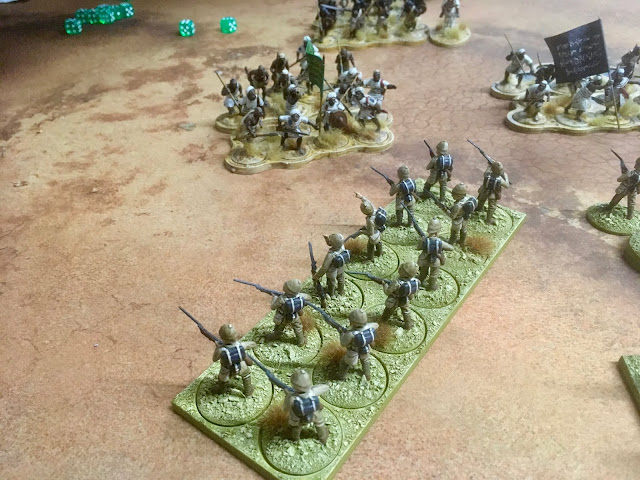 The 2/66th poured fire into Dervishes but the 1/66th was almost wiped out in hand to hand combat... 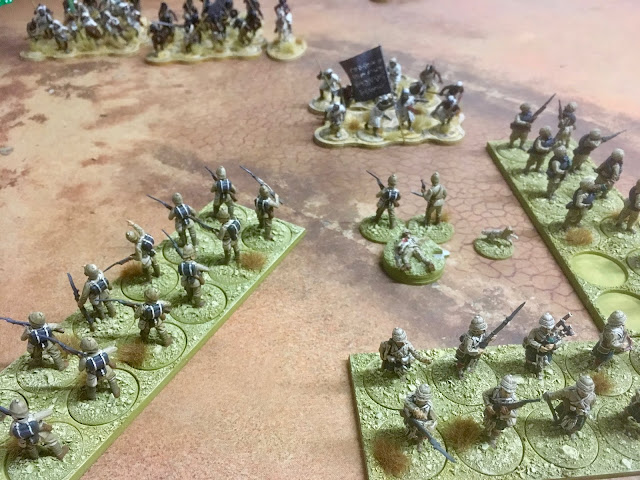 The Sikhs realising they had an army of screaming natives bearing down on them, swung round and engaged the enemy, but suffered half casualties so fell out of Close Order. The Highlanders still decided to ignore the looming threat! 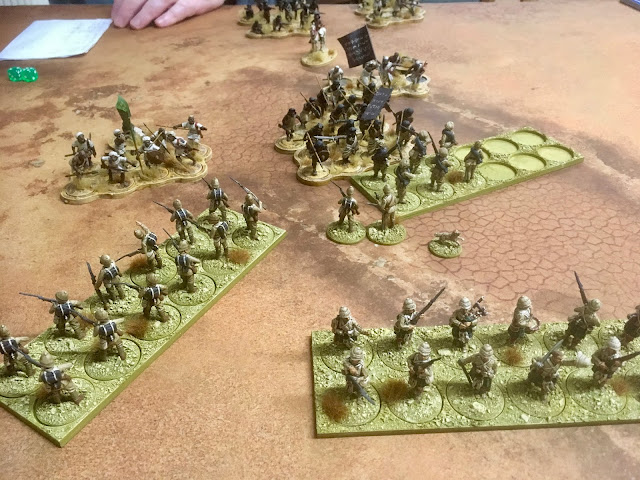 Attacked by more Dervishes the Sikhs were wiped out, although amazingly none of the remaining units failed their Morale checks (belatedly my luck had changed!) 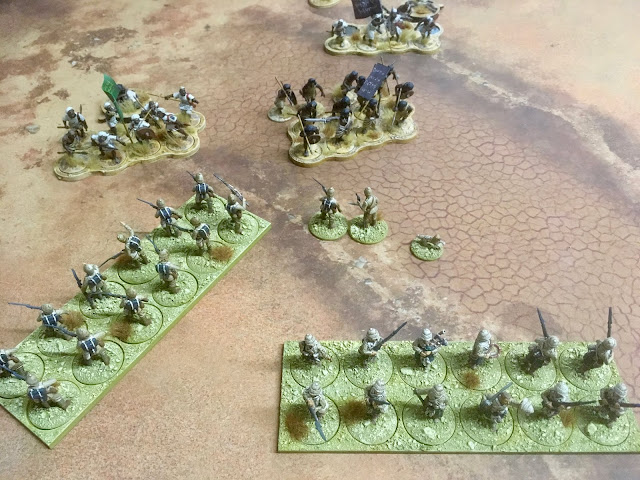 This didn't really delay matters as the 1/66th and 2/66th fell to the stabby Dervish spears. 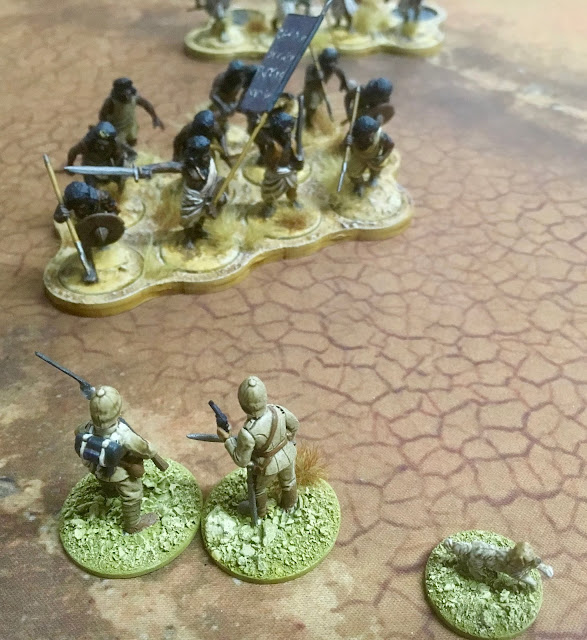 Finally the 92nd Highlanders obeyed order to 'About Turn!' as the Dervishes charged in! 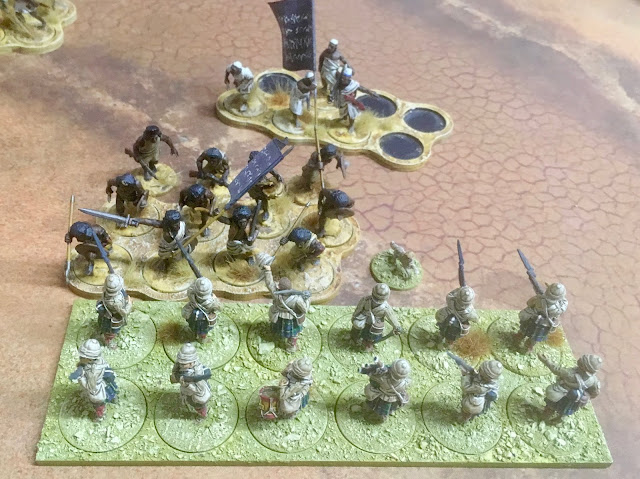 Despite inflicting a number of casualties, half the 92nd fell, breaking Close Order, leading to their inevitable demise... 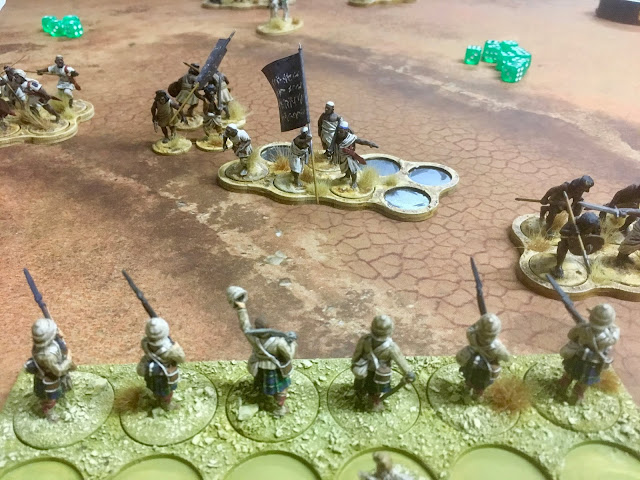 Well that didn't work very well! :-) To be fair the game does not include rules for squares and trying it out I think we can say using Close Order to give a facsimile of it doesn't work as it is too easy for one side to fall out and the others unable to support.

Ok so overall a bad evening largely down to some absolutely lousy dice rolling by me, and in Melee combat some well above average rolling from George (his dice need drug testing!), but having played the It's Awfully Quiet Out There... scenario a few times now, I suspect it is fundamentally flawed with the armies we use. Additionally I'm not quite sure why the forces are unbalanced points wise as the Defender has no advantage of fortifications or similar, maybe we should have played this with balanced forces? Something I've pondered about this and some other  TMWWBK scenarios with different points values...
Posted by Steve at 00:48:00

Email ThisBlogThis!Share to TwitterShare to FacebookShare to Pinterest
Labels: C19th Wargaming, Colonial wargaming, The Men Who Would Be Kings