One quick and fun scenarios in Rebels and Patriots is the first scenario in the book, First Clash at Lament Ridge and we decided to play that down BIG with famous American spy Ms Anna Strong being the objective atop of the central hill. Essentially the scenario is a straight forward contact one with added interest of an objective that players try to have gain unopposed control over to gain Honour points.

The American army was quite a bit larger than the British, but the quality of the British units was generally better. 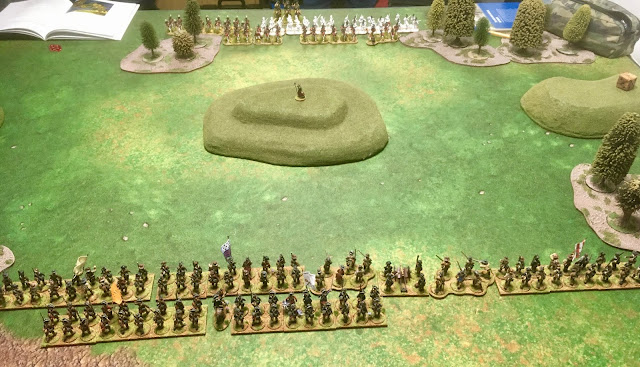 The British army was feeling a bit sleepy with a number of units declining to move forward whilst the Americans were clearly up to rescue the patriot lady! 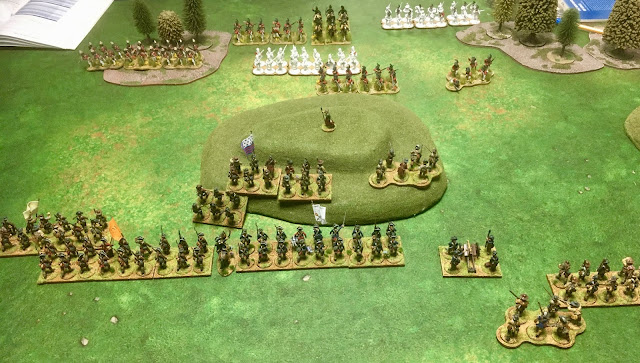 The Americans stormed up the hill pumping fire into the 1st Lights who became Disordered. The 23rd Welch Fusiliers hid in a wood and opened fire on the advancing 2nd Maryland... 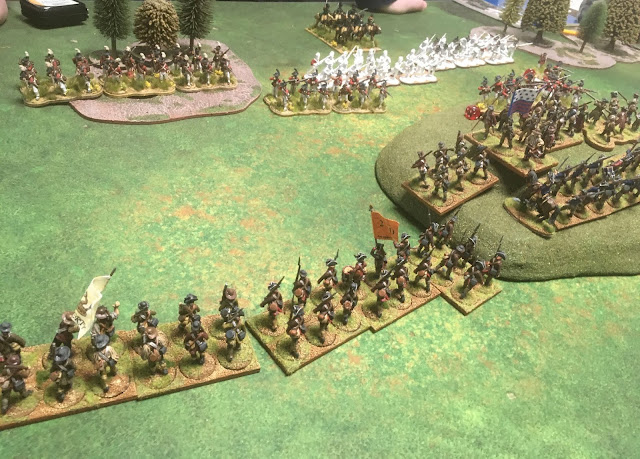 The Fusiliers inflicted one casualty on the Marylanders who, following some typically awful dice rolling by me became Disordered. George pounced and charged his British Legion cavalry into the 2nd Maryland! 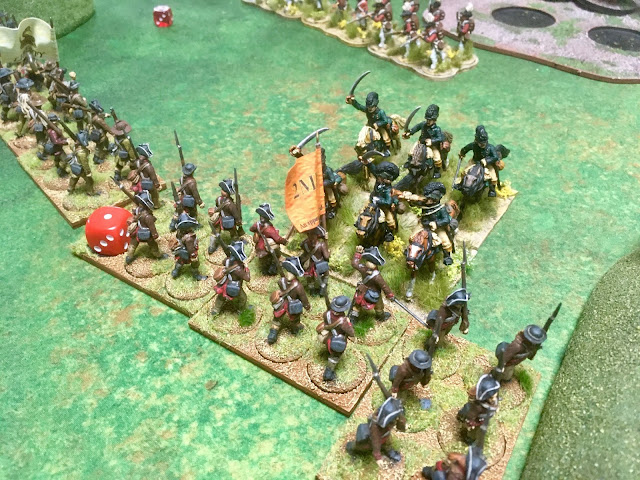 Fighting at half effectiveness as Disordered against Charging cavalry saw the Marlylanders disintegrate and rout, leaving a large hole in the American left flank! 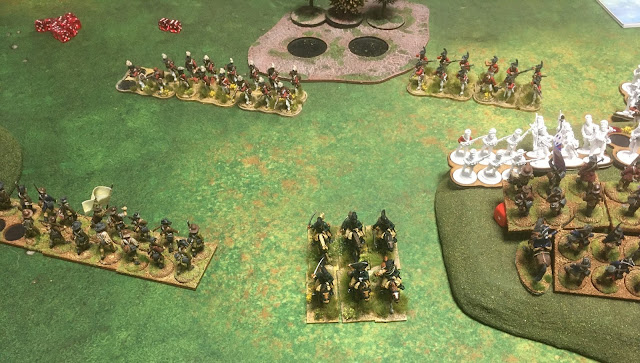 The Cavalry then took on the Virginian militia who having suffered casualties from the Welch were Broken, but amazingly (given they were also Timid) they fought off the Legion cavalry charge not once, but twice before heading home to the Blue Ridge Mountains to sing songs of their valour! 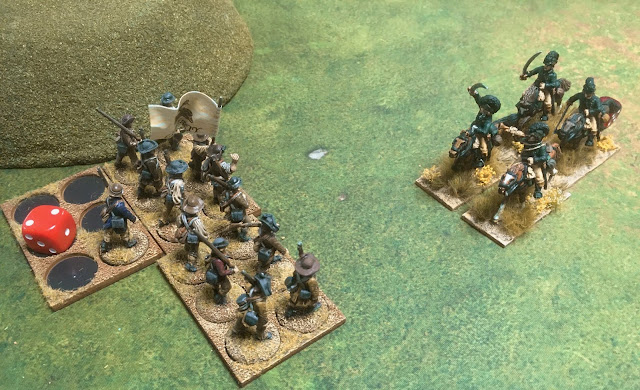 Meanwhile on the hill the 71st Highlanders stormed into a unit of North Carolina Militia... 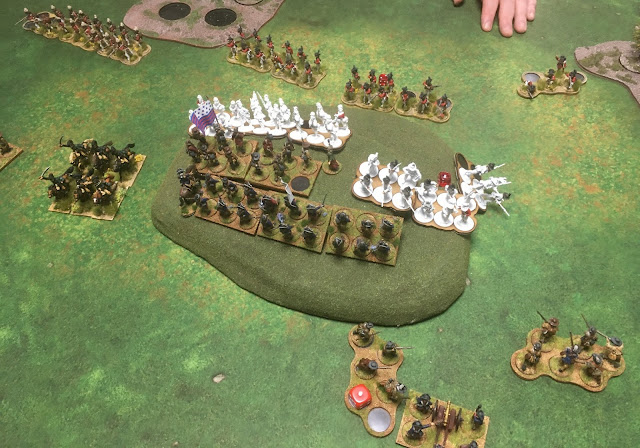 ...whilst the 1st Maryland Disordered the advancing 33rd Foot.

Unsurprisingly the North Carolina militia did not hold up well against the Highland Shock Infantry... 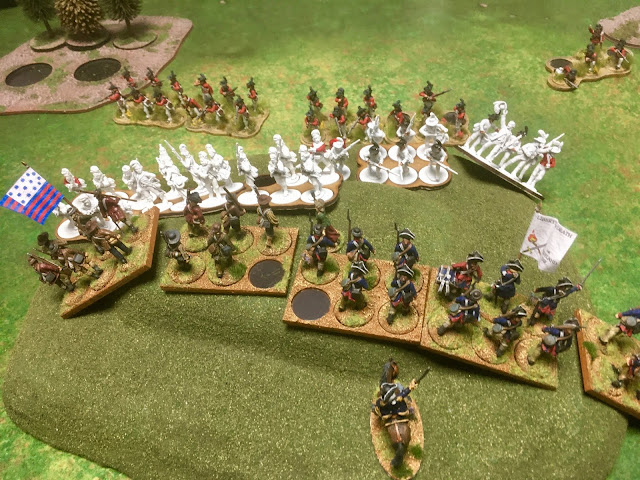 ...who swept them away as they Followed Up their initial Charge!

The left flank of the American army had completely disintegrated at this point... 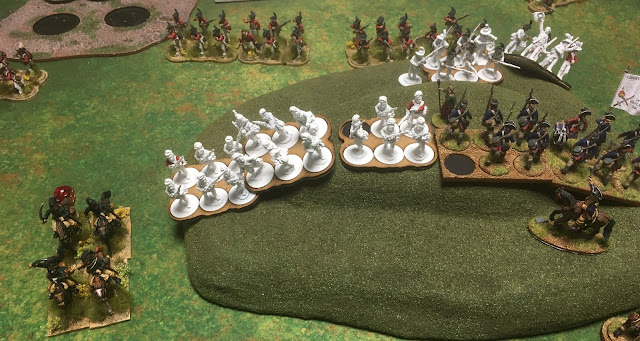 But hold on the brave 1st Maryland are still on the field of battle and they attacked the 71st, killing five and Disordering them! Strong Deeds from the boys of the Old Line State indeed. 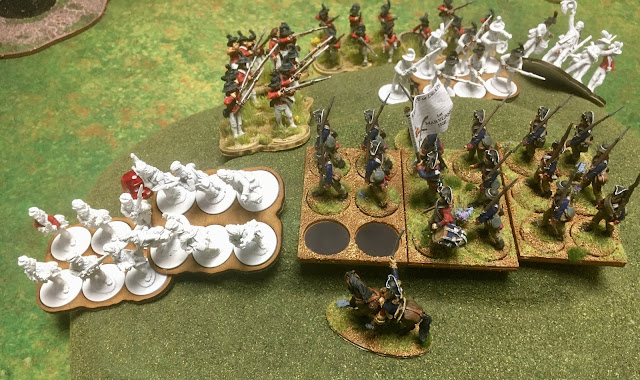 However they are soon under attack from the 1st Lights and 33rd...

...who inflict a number of casualties. The brave Maryland boys hold firm though and a unit of Virginian rifle Skmishers pepper the 33rd Foot, forcing them back and inflicting a Disorder marker on the Lobsterbacks. To the rear the British Legion cavalry run away to safety after becoming Disordered having tried to charge the 1st Continental Artillery! 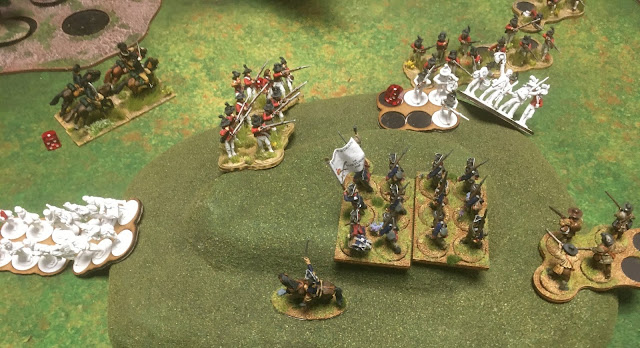 Whilst their left flank had gone, was it possible for the remaining American forces to resist the British assault and save Ms Anna Strong? 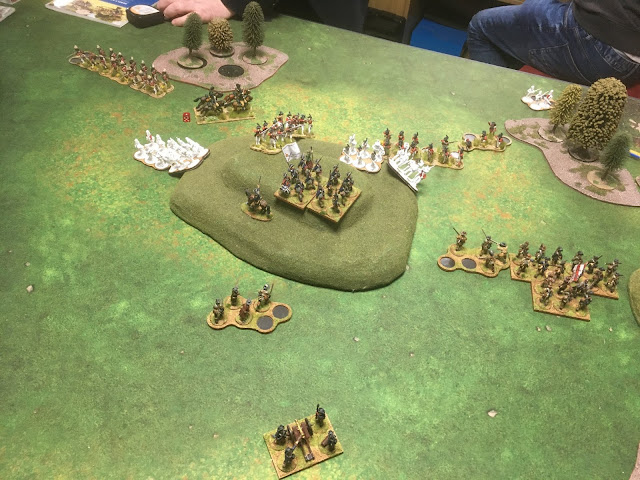 Sadly not. The 71st Highlanders having taken pause at being pushed off the hill by the 1st Marylanders, charged back up inflicting a Disorder marker on them... 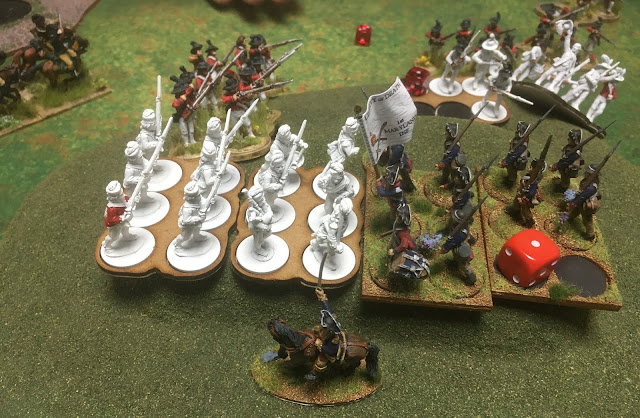 ...and Following Up the Charge with another assault forcing them from the field of combat.

The resultant Morale checks saw one unit of Virginia Skirmishers rout and the remaining North Carolina Militia to become Broken. 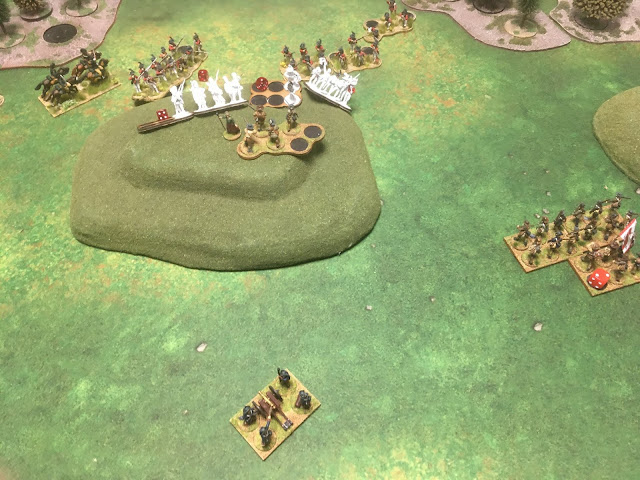 A final round of musket fire cleared the hill of any remaining Americans and the British, somewhat bloodied and battered, captured Ms Anna Strong! 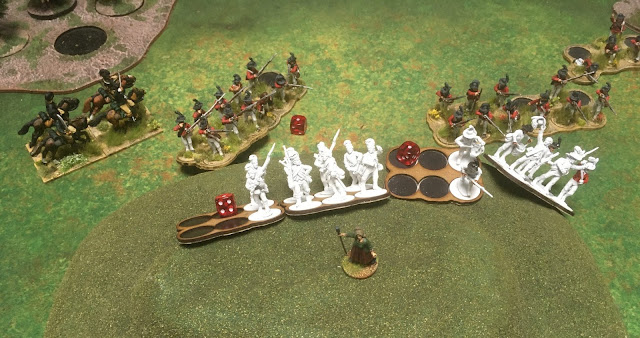 Whilst another British victory for some time it did seem that the battle could go either way, especially when the 1st Maryland had pushed back the 71st Highlanders. If only the 2nd Maryland had not broken when charged by the British Legion they would have been in an ideal position to pour musket fire into the Disordered Scots!

George's use of cavalry was exemplary and showed that they could be effective and not just run around the board aimlessly as they do when I employ them. My key mistake, I think, was not keeping the 2nd Maryland back as a reserve. The Militia units are not going to last long in hand to hand combat with British regulars so I need to preserve as many Continental units to follow up the sacrifice  of the Militia speed-bumps.
Posted by Steve at 11:24:00