My second game at Big Winter Wonder Lard was Chania Gate, a Chain of Command scenario run by Sam Lancashire. As I was a complete noob never having played CoC before I was taken under Alan's more experienced wing, our mission as the Fallschirmjäger to take the Chania Gate in Heraklion against a mixed force of Greek regulars and Cretan types commanded by Mike and Ben. 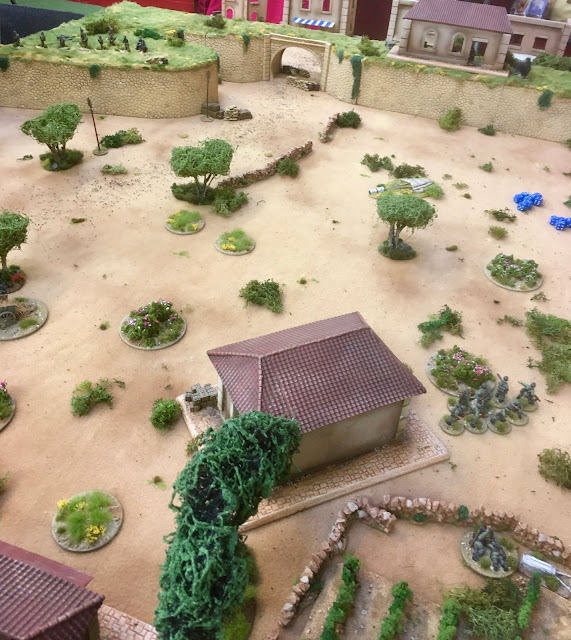 The Germans deployed one section in the building with their Senior Leader, another section in light cover and a 2" mortar behind hard cover which began stonking the Greeks manning the city walls. 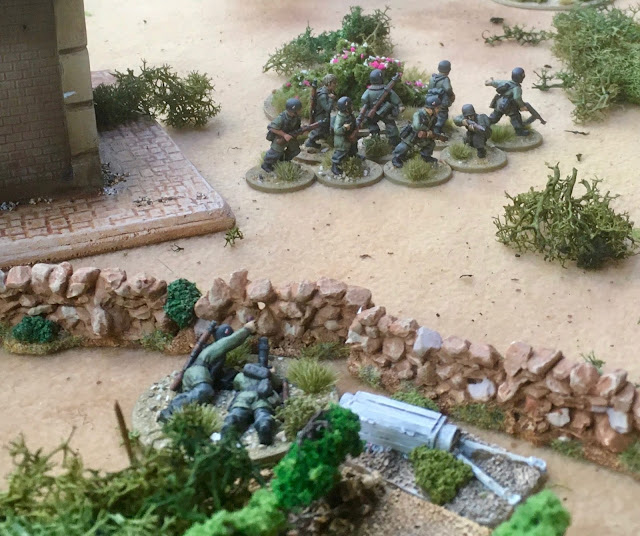 The Greek view of the battlefield. 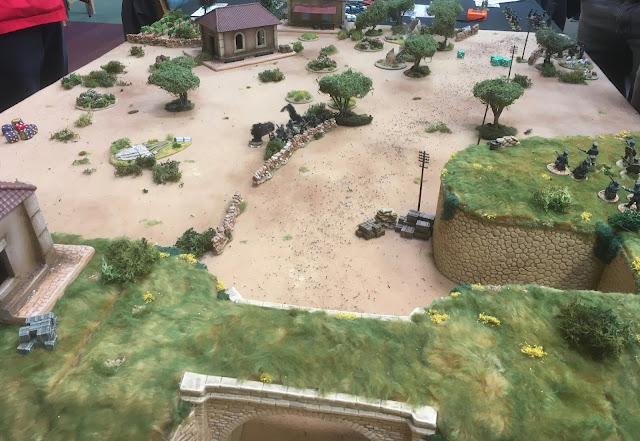 The Greeks had three sections manning the Venetian city walls, these Cretan Gendarmes moving up to engage the advancing Fallschirmjäger... 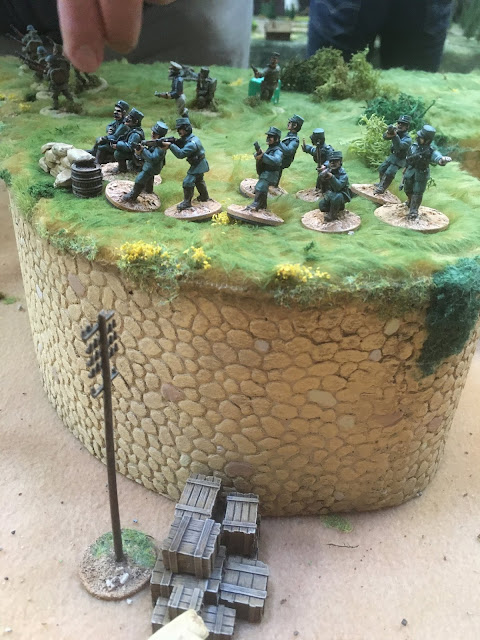 The Gendarmes found themselves being hammered by the Fallschirmjäger in the building, but did inflict multiple casualties and Shock on the section moving aggressively up the table and now hiding behind the cover of a stone wall. 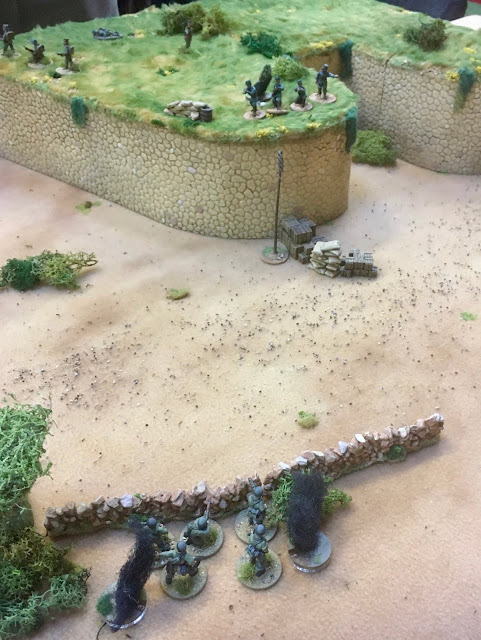 On the other flank another unit of Fallschirmjäger started to move up, engaging the Greeks on the wall and using sheep for cover... 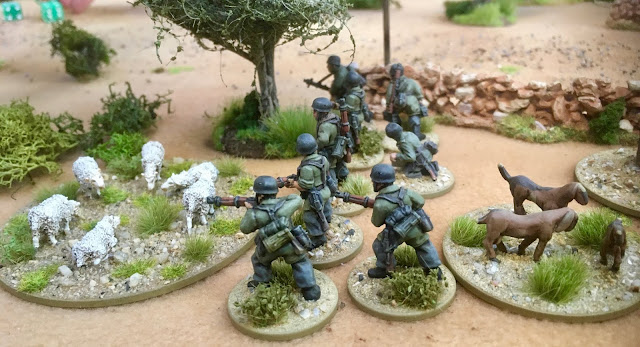 The first unit of Fallschirmjäger continued to engage the Gendarmes from behind the cover of the stone wall... 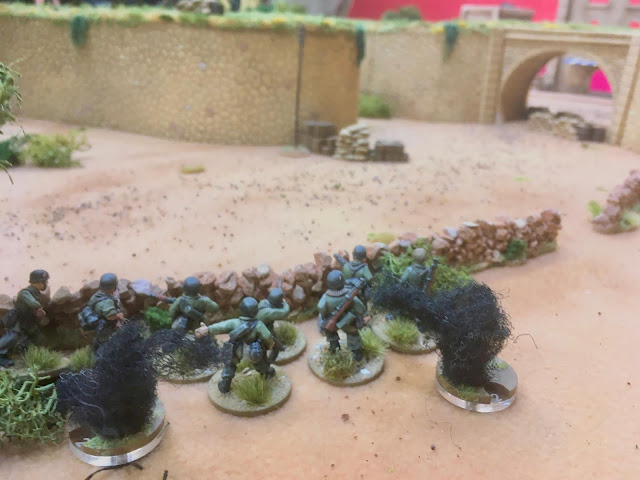 But found themselves exposed from flanking fire from Greek regulars and an Australian Bren gun... 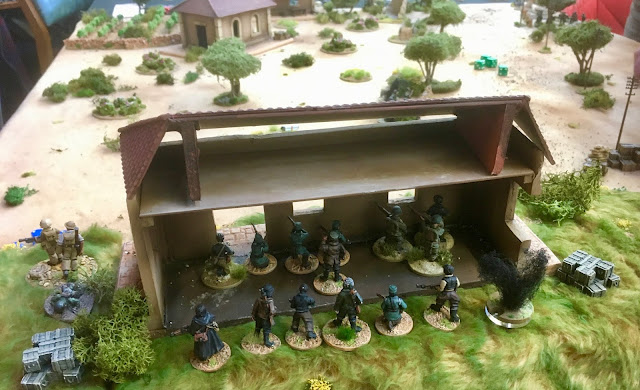 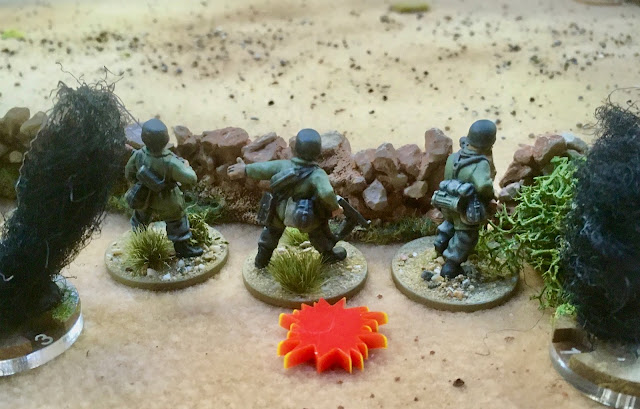 The Germans used a Chain of Command dice to move a Jump Off Point forward and then deployed an Assault Section behind the wall. Wunderbar! 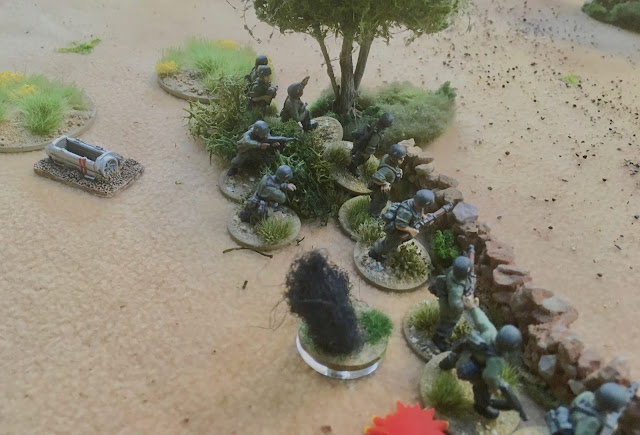 Unfortunately the original Fallschirmjäger broke and ran back towards safety. 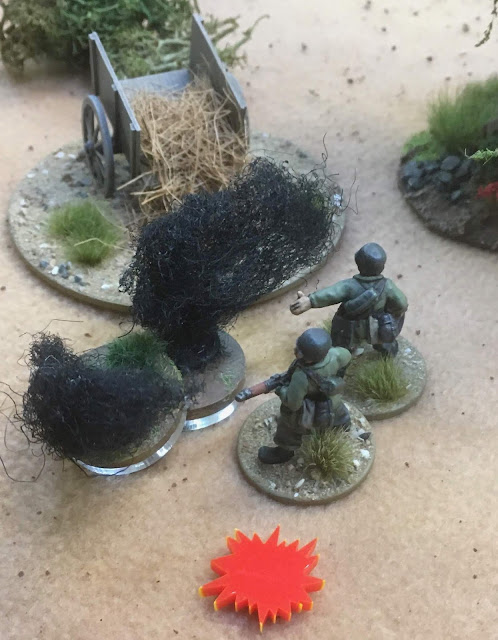 This saw a reduction in the Force Morale for the Fallschirmjäger. 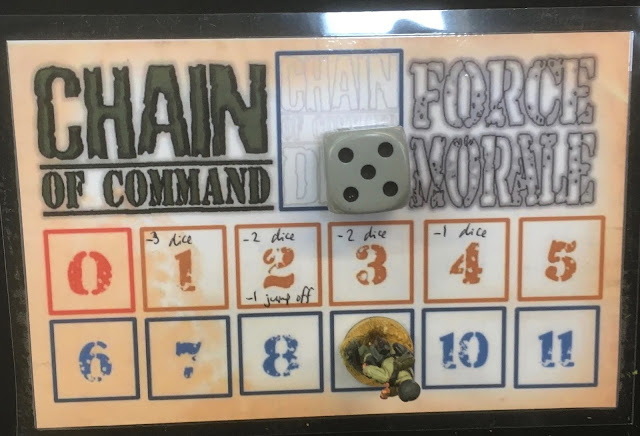 However reinforcements in the form of a Pak36 arrived and it started peppering the Australian Bren team with HE... 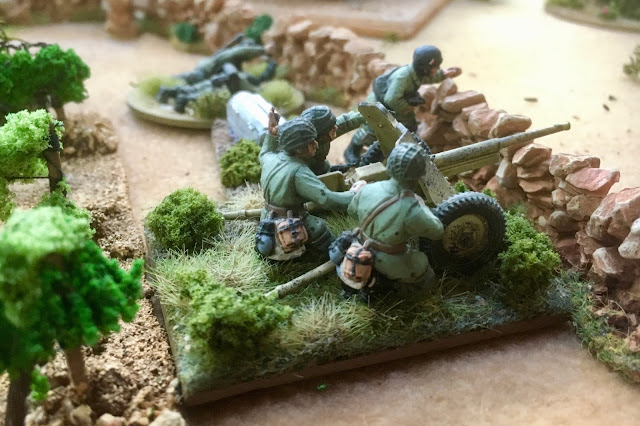 Inflicting Shock on them and forcing them to retreat! 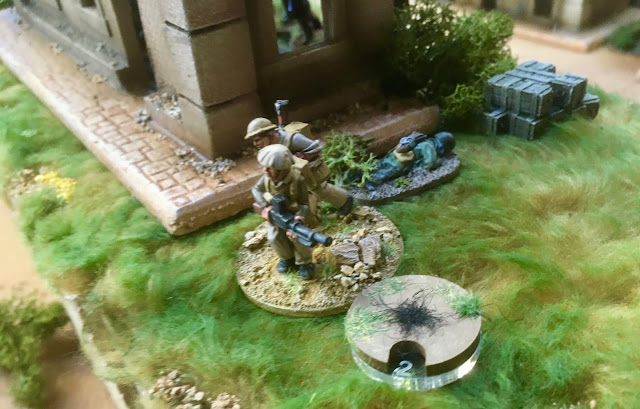 The Fallschirmjäger concentrated their fire on the Greeks and Cretans atop the wall to the left of the gate, destroying the Gendarmes and Pinning a unit of Greek regulars. Feuer Frei! 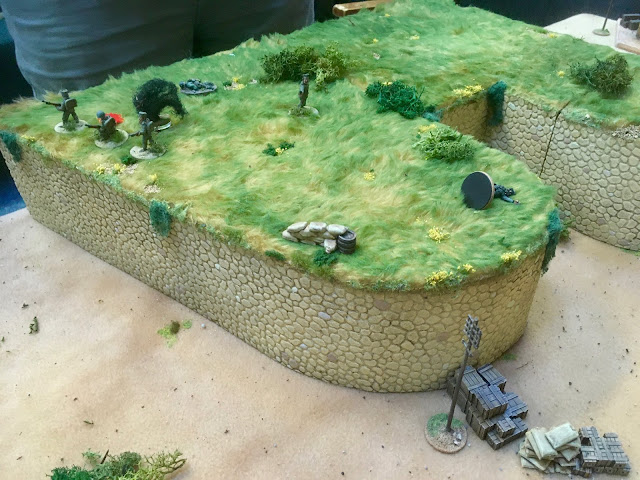 This, along with the retreat of the Bren gun team, had a major impact on the Greek Force Morale and the number of command dice they could generate. 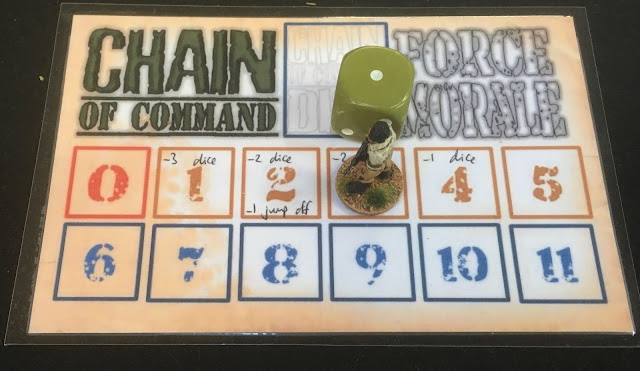 The Fallschirmjäger felt victory was within their grasp and the Assault Section charged forward towards the Chania Gate! Vorwärts! 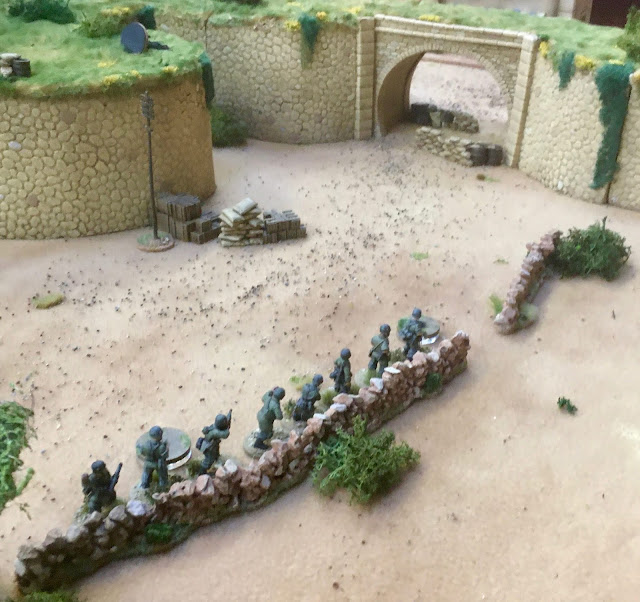 The gate lay ahead. Surely victory was assured for the Fallschirmjäger?! 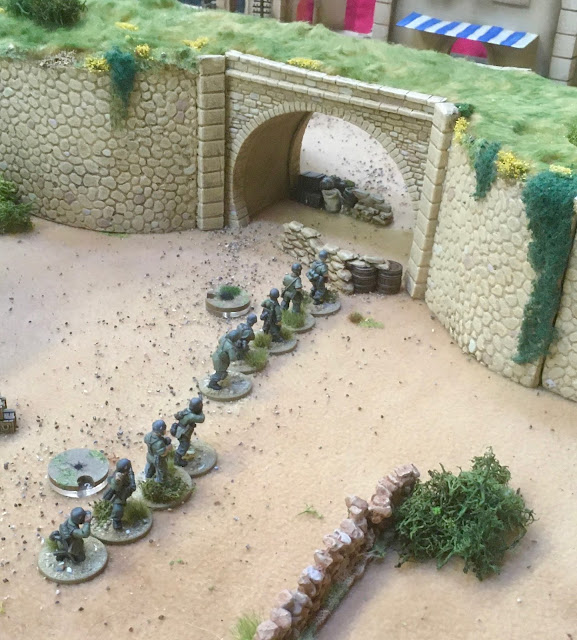 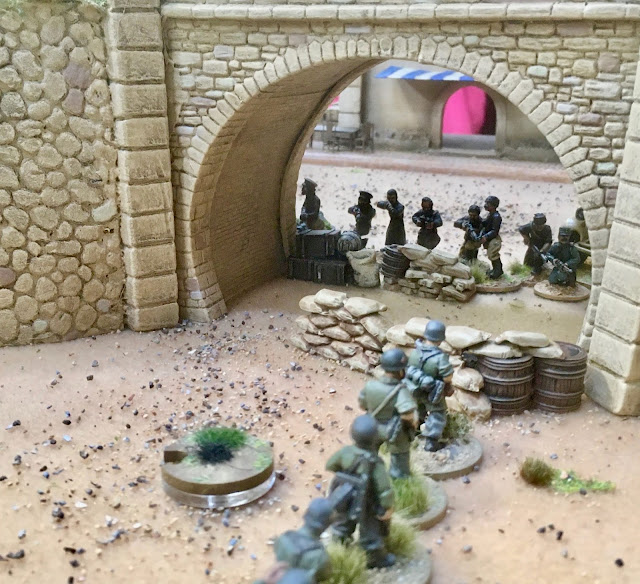 The Germans returned fire and a fierce firefight ensued, with Cretan forces from the building on the wall, dropping down and rushing to the gate. Had the Fallschirmjäger misjudged the situation? Would the Assault Section be unable to take the gate? It didn't matter. The Fallschirmjäger oustide the walls lashed the remaining Pinned Greeks on the wall with machine gun and rifle fire breaking them and forcing the Greek defenders Force Morale to drop to zero - the Greeks surrendered! Phew! 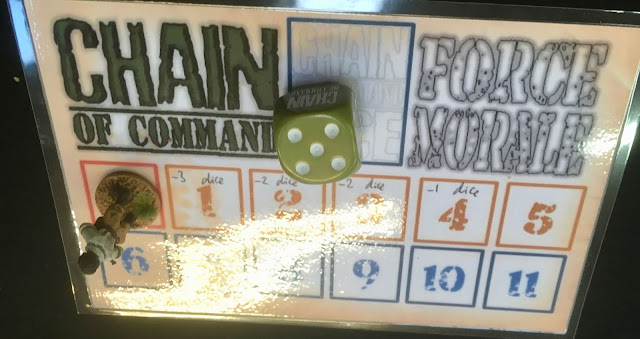 Another fun game and many thanks to Sam for running it and Alan for putting up with a complete noob! :-) I was impressed with how the rules worked and have signed up to a Chain of Command weekend campaign at BIG at the end of May.

Elsewhere amongst a load of great looking games I managed to take a quick picture of the new Lardies Ancients game Infamy! Infamy! which looked a lot of fun. 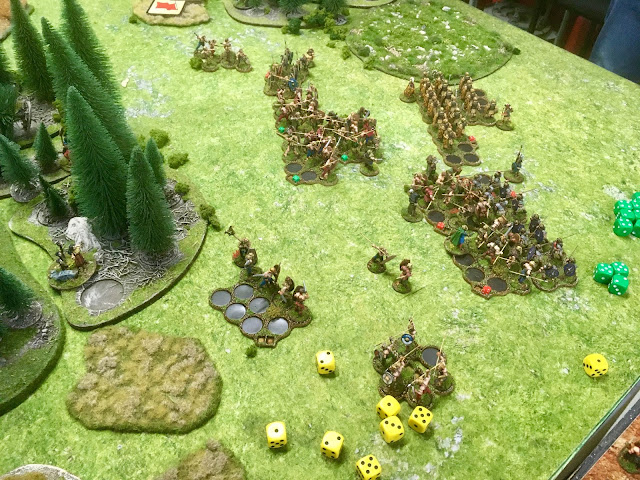