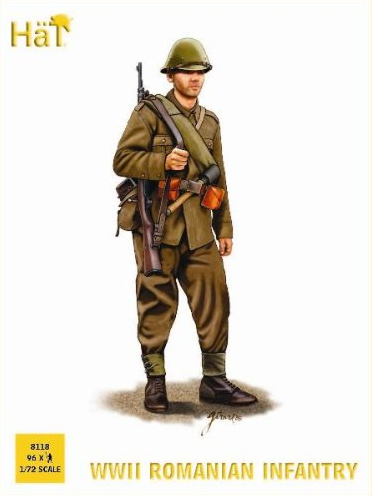 My on/off 20mm late WW2 Eastern Front Battlefield Evolution project flicked back to "on" today after I (literally) tripped over a box of HaT WW2 Romanian infantry last night. I bought the box a few years back when it first came out, pleased that someone had bothered to release 20mm miniatures of the forgotten armies of WW2.

The Romanian contribution in WW2 is fascinating and a decent overview can be found on the Flames of War site here. What makes them a great army for wargamers is that they fought both for and against the Axis, switching sides in August 1944.

Today has been a day of planning and working out what I can make up from the box I have. The HaT box is pretty decent value containing 96 figures including command, flamethrower, sniper, lmgs, mmgs, anti-tank types and mortars, as well as a plethora of rifle armed troops. For under a tenner you have pretty much all you need to make a reinforced platoon with lots of spares.

The sculpting isn't the best, but looks like it will paint up well due to the slightly chunky style (they look more like metal wargames figures than plastics). The plastic is quite bendy and I was initially very disappointed with this, but I tried a head swap on one of the officer figures and found it took superglue very well, making conversions simple (two of my NCO's now have helmets). 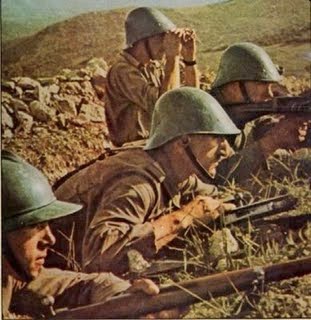 Having had some fun this afternoon with the infantry I turned my attention to vehicles. You can get away with using readily available German and Czech vehicles which were supplied to the Romanians, but liking the some of their unusual designs such as the two TACAM SPG variants (their version of the Marder) and the upgunned French R-35's that were still in action in 1945, I was pleased to discover the Friend of Foe range at Shell Hole Scenics which includes all the AFV's I fancy.

A bit more Google-fu led to this excellent site resource about the Romanian Army in WW2 and this useful painting guide on the Battlefront FoW site, so no excuses for not getting one of the largest forgotten armies onto the tabletop!
Posted by Steve at 18:06:00