A few years back I had one of my "ohh shiny!" moments at Fisticuffs and ended up coming home with a pink carrier bag chock full of 15mm Early War French from Peter Pig (don't ask...). Currently sat somewhere on Lead Mountain I hadn't given them too much thought until I hear that Zvedza were planning to release a Matilda I and Hurricane for their Art of Tactic game sometime in 2012. I mentally filed this information away until the ducks started to line up following Mark Hamman's post on his blog about his Wacht Am Weekend Battle of the Bulge project. 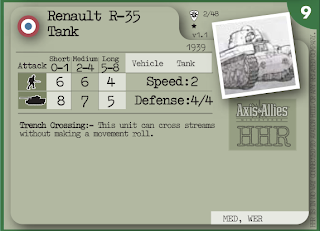 It was Mark and Maff's idea to have some small beer 'n' pretzels games using the Axis & Allies Miniatures rules that caught my imagination as I didn't want to go full tilt into something like Flames of War at this stage. I've never played the game but having downloaded the rules for free from the WizKids! site here, I was quite taken with the simple mechanics and that looked like they'd provide a fun old school type game (in the 'Airfix' tradition as Maff put it).

The only problem was that whilst the rules were free the unit stats were on the cards that came with the miniatures (which I didn't want to buy as I already had miniatures to use). Mark and Maff however came to the rescue pointing me in the direct of the Axis & Allies community who have developed some house rules (here), importantly all the stat cards for the house rules (here) and loads of other units including anything from dinosaurs to the Red Skull (here). 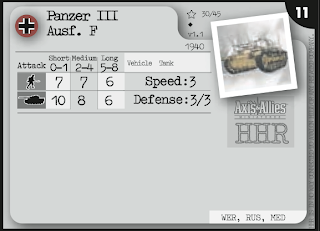 So having solved the rules (and stat card) issue all that remains is the miniatures. Tentatively I'm going to look at knocking up some small Blitzkrieg era 15mm forces later in the year when I take some holiday (note to self, take more than one day off in the first six months this year!), looking at blitzing through the forces in a week or so (well, how long can 15mm German really take?!).

All I have to do now is find the French to see what I bought and then draw up a shopping list of Germans (and yes, the Zvedza plastics will probably be the route for AFV's I think I can get away with an Ausf G variant of the Panzer III in 15mm...)
Posted by Steve at 19:37:00