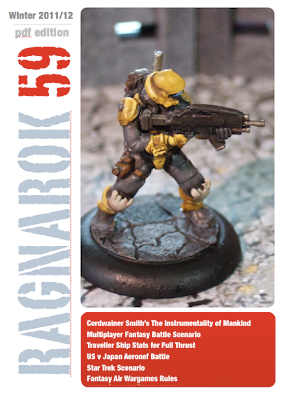 I didn't realise until yesterday that Thursday 12th January was the Society of Fantasy and Science Fiction Wargamers 20th birthday, or at least the date of the first meeting of the inaugural committee to get the thing off the ground. It's funny to see how the hobby has changed over the last twenty years (the internet for one thing) but at the time fantasy and SF wargaming was falling in a black hole between historical wargaming and role-playing.

For my sins I took on the role of society journal editor for the first thirteen issues, before a twelve issue break, then another eleven issue stint before handing the reins of Ragnarok over again. I was adamant that was it and I could hand over to a long series of future editors. Two later I'm back in the hot seat largely because it seems no one else is fool enough to volunteer! :-)

So since November I've been back on editorial duties and have just finished editing and proofing Ragnarok 59, will probably be sending it off to print next week. If you are interested in fantasy and/or SF wargaming have a look at the contents here and see if it interest you. If so, please join the SFSFW, the more the merrier and it would be good to have you on board as we set forth on the next twenty year voyage of F/SF wargaming...
Posted by Steve at 20:54:00