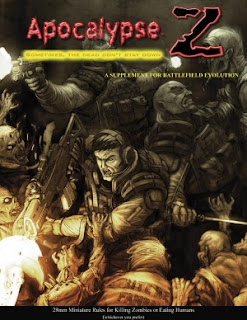 Wargaming pressies in Blease Towers were rather limited (through choice) this Christmas. I received a couple of packs of lovely Indian Mutiny figures from Mutineer Miniatures (no, not a new period, just a very stagnant one) and an unasked for, but very welcome, GW Dreadfire Portal and Eternity Stair (currently constructed, undercoated and hoping to start on the Stair this weekend). Saul received an Arachnarok Spider (which he wants to have a 40K option scratchbuilt for) and three packs of Wargames Factory zombies...

The latter are going to end up on the workbench first as I look to get them ready for some games of Apocalypse Z (the zombie supplement for Battlefield Evolution), which you may recall I picked up off eBay for just 99p. Although the supplement is somewhat American orientated you can use any of the forces from Battlefield Evolution which would tie in with my preference to have a British based battlezone (if only because 28 Days/Weeks later are much beloved films in Bleaseworld).

This also ties in with a couple of other projects. The military and survivors will also be used as forces in my planned England Prevails games and I have for sometime planned on converting Scudbusters into Z-Busters, the background fitting in with that in Firewall 2136AD (the reason that Scotland is a wastezone in the background).

Anyway, off to study the supplement and ponder hat additional miniatures will be needed but in the meantime if you need a little zombie fix check out this excellent low/no budget fan film on You Tube, 28 Days Later - The Rage...