Some of you may be aware that Wessex Games produce a fantasy-WW2 game called Panzerfäuste with the historical protaganists replaced by fantasy stereo-types, this having been a (un)natural progression from the work I did on Flintloque in the mid-nineties.

A couple of packs of miniatures have more of a Great War flavour, especially the Dwarf stormtroopers, Gnome infantry and (unreleased) Orc Highlanders so I was quite taken to see that there is a small online community producing fantasy-WW1 miniatures with a possible game being put on at Salute.

First off there is The Goblin Barracks with their lovely German Goblins sculpted by Richard Ansell as an OPFOR for the Hasslefree Kindred WW1 British Halflings. With miniatures in Picklehaube and Stahlhelm I must say they are very tempting. 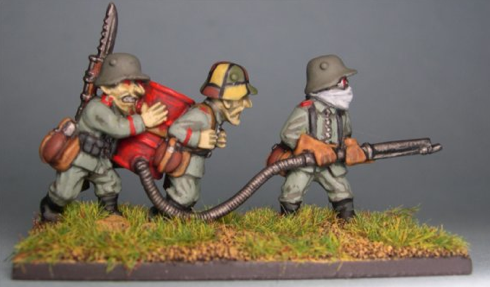 Second off are Akula's Armies Dwarf Russians sculpted by Bob Olley (with the possibility of Undead Ottomans to come) which look absolutely lovely...

I know I must resist the call of a new (albeit related to an existing) project but it is proving very hard! :-)
Posted by Steve at 13:03:00