A bit of concerted effort yesterday saw me polish off the two Italian SPAD VII's from Skytrex yesterday. I had intended to paint them up as French machines but reading The White War I felt that the Italians deserving of recognition (and my Nieuport 28's will definitely be French - with one flown by an American!). Both machines are from the 91a Squadriglia, the two tone colour scheme being down to the difference between the canvas clear doped linen look (GW Bleached Bone) and the painted metal cowling (GW Iyanden Darksun). The contrast may be a bit too much but I like it. Decals are from the ever reliable Dom's Decals. 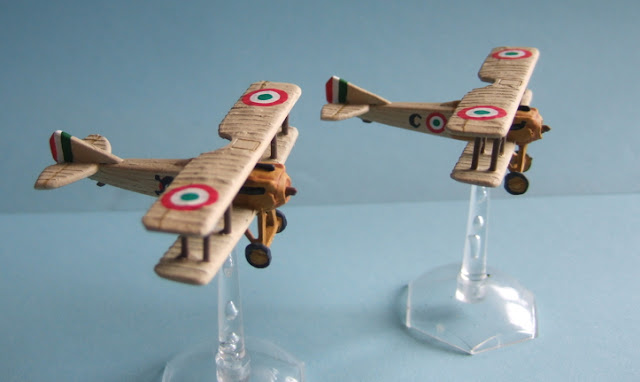 The plane with the crescent moon painted on the fuselage is that of Tenente Giorgio Pessi who had six victories. 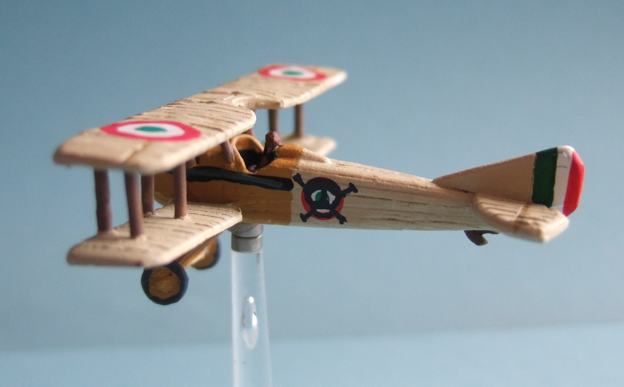 The SPAD with the skull painted over the fuselage roundel is that of Capitano Fulco Ruffo di Calabria who netted an impressive twenty victories during the war.

Onto the Caproni next, though British reinforcements in the form of two Der Kampflieger Airco DH5's and two Sopwith Pups have now turned up... :-)
Posted by Steve at 11:19:00