Cunning plan to take three days holiday from work to link the two "four day weekends" and rescue the game room failed at the first hurdle - SWMBO... She pointed at the huge pile of wood in the back garden and ordered me to build her pergola! Prayers to the rain gods went unanswered and to be fair it has been sat awaiting construction since delivery last summer (and it is so big it does look like I could use it for having some BIG wargames outside complete with BBQ!). Five days of DIY (three blisters and many cuts, bruises and aches) later it is still not quite finished (though all 400 screws have now been screwed into the deck and the posts are all upright) so it looks like I'll have to miss the royal wedding (damn) to finish it off! :-) 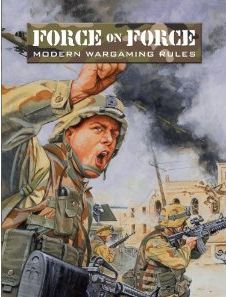 In between times I haven't managed to paint a thing but after resisting the five pound off offer at Salute I fell victim to Amazon's over ten pounds off offer and ordered the new edition of Force on Force. Whilst I'd heard lots of positive comment about them I hadn't really intended to buy them given the rrp and just how good could they really be? Well, I haven't had a chance to play them and am only part way through reading them but I like what I am reading a whole lot.

Games are fought in a small area (if you use 15 or 20mm, a two foot square table is recommended), opposing dice rolls of varying types are used (a chance to dig out those old D8's and D12's!), the emphasis is on small unit tactics not an individual's abilities and I really like the way the game treats regular v irregular (asymmetric warfare) as distinctly different from regular v regular which is perfect for what I want to do, not only with the small (rather random) collection of modern figures I have, but also my (sadly dormant this year) modern English Civil War project.

Production is top notch (as you'd expect from Osprey), the hardback being slightly wider than an Osprey MAA but all in all a nice size. My only bugbear is whilst there are lots of varied artwork of modern troops, the photos are almost exclusively of US troops which is disappointing.

Overall I have to confess I probably wouldn't have taken the plunge at £25 for the game, there are too many "Beano annual" sets hitting the market at £25 plus these days to keep doing that, but at £14.68 (the price of a Chinese takeaway at Blease Towers) I took a punt and was glad I did. Really looking forward to giving this one a spin...
Posted by Steve at 21:39:00