Before tea I had a quick rummage in the attic to check out what boxes of 20mm modern plastics I had sitting around to use with Force on Force and came downstairs with a nice pile. Whilst I couldn't find the old Esci Vietnam boxes I know I have, I was surprised to find two boxes of Esci's Modern US Soldiers, two boxes of their Modern Russian Paratroopers Spetsnaz, a box of NATO troops and a box of Warsaw Pact Troops all of which I must have picked up in the Eighties.

The US Soldiers are of that era and I think they are beautifully sculpted and detailed, the only criticism I could level at them is that they are a tad static. That said they'll be perfect for Force on Force and with a good mix of M16's, M60's and M47 Dragon launchers. A number of the troops have their sleeves rolled up and whilst they could be used for temperate theatres (spring/summer) the lack of a temperate OPFOR dictates they will be painted up in the wonderful US desert chocolate chip camo.

The reason for that is the Russian Paras (the obvious hypothetical OPFOR) who are clearly kitted out for service in Afghanistan or similar climes, a number sporting tropical hats, most berets. Again beautifully sculpted, the poses are a bit static but nothing too serious to worry about. Looking at the sprues it may be that the Russians are short in the LMG department, but there is a rather generic looking figure in the Warsaw Pact set who may well be of use, although he is wearing a helmet.

The NATO and Warsaw Pact Troops boxes are really oddities with three or four poses form particular armies and not a lot of use unless they can be combined with something else. The Warsaw Pact box does contain a Czech tank crewman who is generic enough to be a Russian and some of the others amongst the East German, Czech, Poles and Hungarians may work with head swaps. The NATO box is less useful with a mix of British, German, French and Italian but who knows. 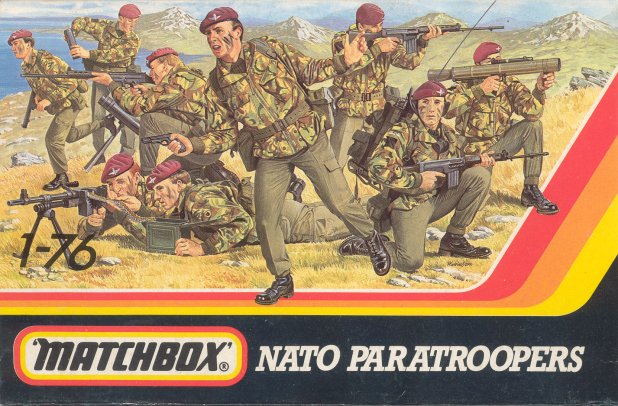 I also discovered a box of Matchbox's NATO Paratroops which are nice figures with a good mix of weapons. Largely SLR armed the major negative compared to the Esci US Infantry and Russian Paras is that they are in cold weather kit more suitable for the Falklands that somewhere ending in 'Stan. Again, save them for another day.
Overall a good rummage and I have more than enough troops to raise a couple of platoons of US and Soviets to paint up for some hypothetical '80's clash somewhere between North Africa and Pakistan...
Posted by Steve at 21:30:00