Trying to take Tas's advice of doing a little bit each day I managed to finish off these Finklestein Dwarf  Jägers for Flintloque. 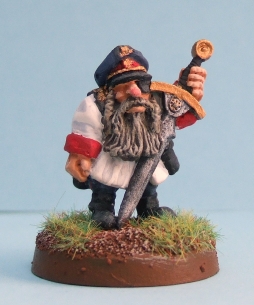 Bearing in mind they got to the 99% finished stage last century, it was nice to see them finished (and yes, they were painted in enamels!). They were one of the last sets Mike Owen sculpted and I'm not sure if they were every commercially released as I can't find them on the Alternative Armies website.

This officer of the Krautian Guard is, he was a test painting to see how he looked in a white tunic. By this stage of my involvement with Flintloque I was keen to re-emphasise the fantasy element as I could see no point just recreating the Napoleonic Wars where the only difference was the models "funny faces" (a view I still hold to and IMHO a weakness in the games development).

For a change I based the models on round bases. Previously I had based my Flintloque figures on square ones, but I prefer round for skirmish games and think the GW War of the Ring bases may be a useful option if I want to have regular formations with these figures at a later stage.
Posted by Steve at 11:07:00