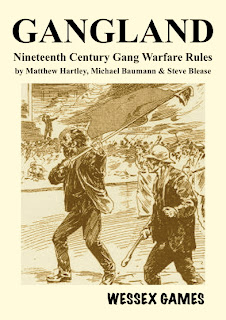 Having worked away most of last week and not been anywhere near a paint brush I then got sidetracked with the PDFing of some old Wessex Games rules for Wargame Vault.

I've managed to get four done this weekend,  ColdWar: 1983, Gangland, Strange Grogge and Strange Tydes. It has been a while since I really looked at these rules and I have to confess the urge to paint some DPM or convert an Airfix HMS Victory into an Orc man'o'war or dig out some Dwarf pirates or prime some of Brigade Games C19th rioters was quite hard! :-)

However I shall resist the siren lure of these projects and steel myself to doing some more painting on my Celts, hopefully I can get the first warband finished this week...
Posted by Steve at 14:05:00