Ancients month progresses, the javelin skirmishers are almost finished (I forgot to Tetrion the bases last night) and I have stuck together the first 28 man warband, just a few bits of Green Stuff filling needed where I reined some of the silly waving arms in before undercoating.

The postman delivered a shed load of books this morning including two supplements for Mongoose's Battlefield Evolution rules that I picked up off eBay for just 99p each! Whilst it isn't going to win any awards for originality I do like the WW2 version of Bf: Evo so was happy to pick up the Pacific War supplement for such a low price. I'm not sure if I'll be doing anything South East Asia wise for a while but I do have a few old Airfix Jap tanks in the attic and odds and sods of polythene infantry and the Kohima book was fascinating so who knows. 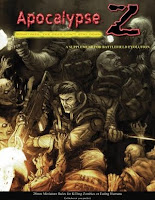 I also picked up Apocalypse Z, the zombie supplement. I already had this as a PDF but just 99p for the book? Well... The supplement itself is pretty good and whilst there may be better zombie games out there I like it was a useful adjunct to both the WW2 and Modern Bf: Evo rules expanding those games into either Weird War Two or traditional contemporary zombie apocalypse.
Anyway, that's enough distractions for now, back to the celts...
Posted by Steve at 14:42:00