Well, after some prevarication and watching my favourite animated Batman movie (Batman & Mr. Freeze: SubZero) again, I have taken the plunge and ordered some of Knight Models Batman figures. 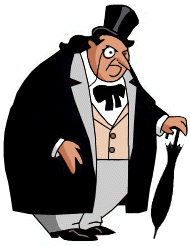 For Bats himself it had to be the Frank Miller model. I know the all black movie look is popular, but Miller managed to make the Adam West Batman look the business, so I had to go with that.

For the bad guys there is far too much choice... I love The Joker, Two-Face is great, Bane (the comic book version) awesome and even new ones like Victor Zsasz appealing, but if I wasn't going with The Joker, there was only one other villain I could start with - Oswald Chesterfield Cobblepot aka The Penguin!

To reign in the temptation of miniature range I am restricting purchases to just one character and one crew pack which must be painted before I buy anymore. This has worked well with the Rogue Trooper Kickstarter and I wish I'd taken this approach on other subjects. Let's see how it goes...
Posted by Steve at 21:08:00