Following on from yesterday's look at several of the Reaper Bones packs in the Vampire box, here are a few more, mainly from the dark side...

First off are the Dark Heroes - two fighter/paladins, a demonic wizard, and a necromancer/death priest. I like the necromancer with the scroll and plan to use this figure with my WHFB Undead army. I may replace the weapon though.

The Grave Danger pack contains a Vampire Lord (called Judas Bloodspire), a Ghast, a Death Knight (an armoured skeleton) and a Liche Lord. The Vampire Lord is a bit of a pain  as even when the sword is straightened he does not sit flat. The others are decent enough figures though and will be useful in the Undead army. 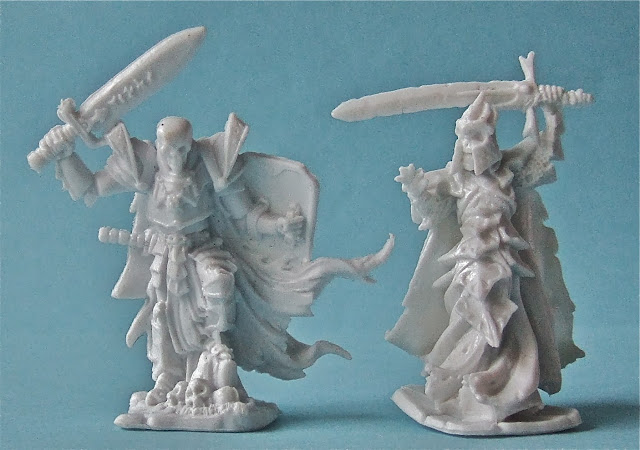 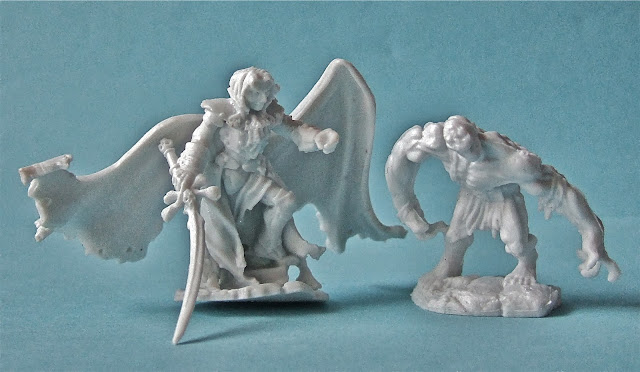 Next is the Necromancers set, a nicely done selection with a GW type necromancer with sword, a great wizard point with staff (with entwined snake) and two females.

Who's Your Mummy? is an Egyptian undead inspired release with a generic Mummy, Tomb Guardian, Mummy Lord, and a wonderful Pharaoh-God. The Lord and Pharaoh God will be eventually seen in a Tomb Kings army, the Mummy may end up in Victorian London...

Finally, tenuously related to the above, a set of Zombie Hunters. A useful post Z-Day pack with a zombie hunter totting a chainsaw, girl with two Uzi type smgs, a seventies style Pimp, and the compulsory Sheriff!  Great stuff, especially of your zombies games are US based...

I managed to put some more paint on some Bones today and it is quite deceptive how much detail there actually is on these miniatures, that appears soft in the unprimed white plastic.
Posted by Steve at 14:07:00