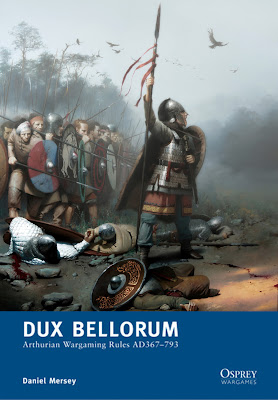 No doubt you are all aware that Osprey have started releasing wargames rules in the Osprey MAA book format, one off stand alone titles covering various periods, kicking off with A World Aflame (for the Inter War period) and Dux Bellorum (for Arthurian Dark Ages). As a rules addict and because Amazon had a 30% off offer on I picked them up.

Dux Bellorum has grabbed my attention more than I suspected it would and I'm lining it up to be an early 2013 project. The reason for this is that the game doesn't require loads of miniatures (forty or fifty a side would seem ok), if I used sabot bases I could also use the miniatures for other games such as Brtyenwalda and the rules themselves seem like they could be quite fun. I like the way that Leadership Points can be bought at the expense of troops and the fact that measurement is by base widths (so how you base your units is up to you - I am pondering using the GW LOTR sabot ones).

This could also sneak in under the "no more new projects" rules as I have a few packs of old Foundry Arthurians somewhere and some Old Glory figures given to me a while back. I had planned to use them as fantasy humans alongside with the plastic GW Rohirrim but they could do double duty as fantasy and historical.

On more immediate projects I have gotten back on the horse today and put some paint on some more Athenians so hopefully some new painted stuff soon...
Posted by Steve at 18:20:00