Hurray, panited figures! The return to the themed month idea has been rewarded with the completion of two more units for the Peloponnesian War project's Athenian army; a third Hoplite phalanx and a unit of Peltast light infantry. 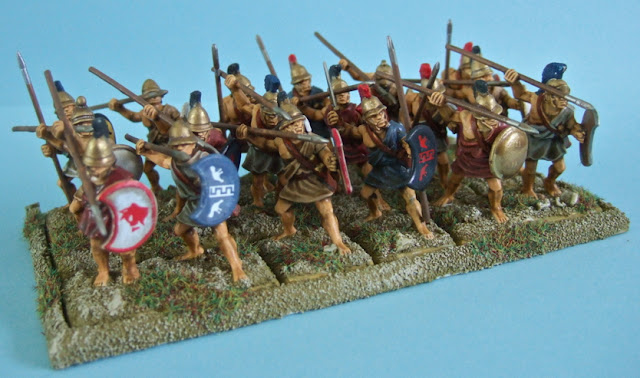 The Peltasts are from Foundry, picked up off eBay during the period Immortal went AWOL prior to their purchase by Warlord. The crescent Peltast shields are actually Wargames Factory from the Amazon box and the transfers for them from Veni Vidi Vici. Whilst I was a tad annoyed at the time, the neater/richer look of the Foundry light troops seems to suit the idea I have in my mind of the Athenian populace being a tad more urbane (and possibly affluent) than the slave helots that the Spartans will have (using the Immortal metals).

The third Hoplite phalanx is, like the first two, Immortal plastics. As with the other two I have gone for a slightly grungier look than the normal wargames shiny white. I cannot accept that troops on campaign on the Plain of Attica would not look grubby and dusty, nor white armour stay "Daz White", after a couple of days. The shield transfers are from the box set.

This just leaves one unit of Veteran Hoplites to complete (they just need the bases painting) and the sixteen Heavy Cavalry I have (which are just about to be undercoated), so, touch wood, the Athenian army should be finished this month.