Whilst the two Athenian phalanxes are proceeding slowly but surely (the insides of the shields are currently drying) I have been catching up on my reading pile, a paper mountain that rivals the lead and plastic mountains!

Alex Scarrow (brother of Simon) has wriiten four books in the series centred around a team of three young people rescued from the point of death by a mysterious stranger to work for a secret time agency (who they have no contact with), tasked with protecting the timeline from change and fixing time slips that occur.

For young adult books they are certainly well written and hugely enjoyable and the concepts Scarrow covers superb. The first in the series, Time Riders deals with changes that occur during WW2 but has two timeslips that will appeal to Weird War Two fans and post-apocalyptic zombie ones.

Book two, Day of the Predator, is a bit Jurassic Park but has enough going for it and develops well as it progresses. 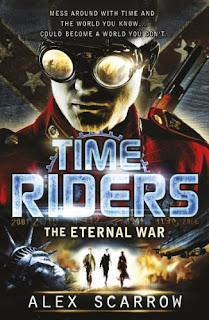 The Doomsday Code, book three, concerns itself with the mysterious Voynich Manuscript and the dispute between Prince John and King Richard fresh back from the Crusades (and questions the historical picture of both).

The fourth one of the series, that I am currently reading, The Eternal War, is set during a timeslip that has resulted in an American Civil War that has lasted over one hundred years and is a wonderful C21st Steampunk world with giant zeppelins,  land ironclads, eugenic creations  etc. all great inspiration for VSF wargamers (some of the historical points of divergence are quite interesting as well).

Overall, despite being young adult books, if you are young at heart I think you'll enjoy these and they are great to share with any children in the family. All have tons of gaming ideas, especially for skirmish games, to boot.
Posted by Steve at 16:44:00