There was an interesting programme on the BBC the other day looking at various less well known stories around the Battle of Britain. At one stage they debated the merits of the Spitfire versus the Me109 with surviving pilots, concluding the latter was just about faster. Well, all I know is that the Peugoet 407 is much faster than a Spit' as we took this one on the M5 this morning on the way to Birmingham, no problem! :-) Seriously, it was an unusual sight with the wings following in a second vehicle. I don't think it really is a Spitfire but the 1/1 scale "Airfix model' James May made in his programme on Airfix as the wings looked like the ones with the emergency steel support pipe in, still it was fun coming up behind it and firing the Peugoet's cannon! (I know I should grow up...) 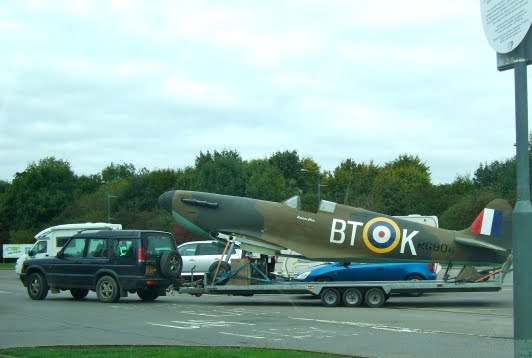 Anyway we arrived at the NEC about 10.10am and walked straight in, no queue, which was a pleasant surprise. The LG Arena was extremely crowded initially, especially the Forgeworld stand, so we moved into the other hall to look at the various studio exhibits (and THQ area for Saul who loves Dawn of War). This area was well lit and apart from the scrum around the new Dark Eldar (photos on TGN for those interested - the raiders are very Martian sky galleon kite now) easy to get around and to see the two huge WHFB displays, one from the new rulebook, one (the Sea of Blood) from his months WD. Incredibly impressive, photos do not do them justice, you could have spent hours looking at all the detail.
Back to the LG Arena I was distinctly underwhelmed first by the abysmal lighting and then by the "samesness" of many of the games. There were too many Elves v Skaven, almost all were on the GW terrain boards and even the 40K games suffered from too many Ork games (I didn't see one Necron...). That said there were some gems, two good Empire v Undead WHFB games and one with two floating wizards towers. There was a big Aeronautica Imperialis using 28mm scale Forgeworld planes instead of 1/300th (this was the only non-GW trinity game and there were only a couple of LOTR). For those interested I have run my photos through iMovie and uploaded them to You Tube (due to the lighting and the lack of variety, sadly only half as many as last year).

Another disappointment was the lack of any Warhammer Historical games, but Forgeworld did offer the launch of Warhammer Forge, their new fantasy arm and WHFB gamers will now be pleased to see they are receiving the same (expensive) love as 40K gamers from the resin model makers. I've uploaded the photos I took of the forthcoming models for the soon to be released Tamurkhan: The Throne of Chaos sourcebook onto the SFSFW blog. The models did look tempting, especially the Chaos Dwarf machinery (and I've never really liked Chaos Dwarves...)
That though was about it, ok, but not a patch on last year. By 1.30pm we were talking to the blokes who design the boxes for the figures so we decided to grab a pasty and call it a day. We did have a quick look at the Black Library books on the way out. Dead Men Walking (Death Korp v Necrons) and The Emperor's Finest (new Ciaphas Cain) were available pre-release (both due December) but even Saul isn't that much of a fanboy to pay £7.99 for a paperback that Amazon will have at a much cheaper pre-release price...).
Posted by Steve at 23:39:00