You may recall from my Cunning Plan (or two) for 2020 post that I did mention plans to start on a French & Indian Wars army to use with Sharp Practice and Rebels and Patriots (as based up for here), and that the plan was to use the Galloping Major figures and raise a largely American Provincial force rather than a British or French-Canadian one.

My reasons for this are two fold. First off I wanted to paint some figures not sculpted by either the Perry's or from the Foundry school (Copplestone, Artizan, Crusader et al) just for a change and secondly I did not want to paint a whole army of redcoated infantry (I have Malburians waiting for that!). 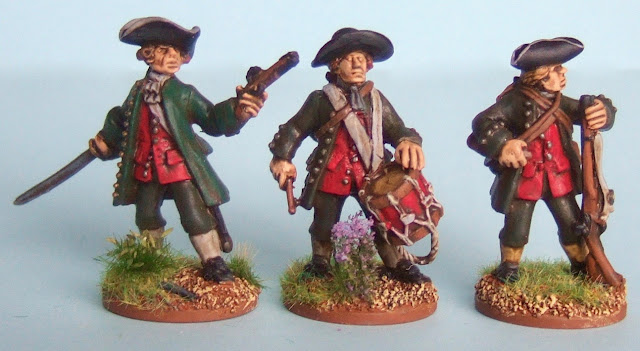 With the second point in mind I did some research and found the Forbes Expedition if 1758, whilst containing some Highlanders and the 60th Royal Americans (so some red), had Provincials units from Virginia (blue), Maryland (red), Pennsylvania (green), North Carolina (Indian dress) and the Lower Counties, what was to become Delaware (green) - the first unit painted here. All in all quite a colourful mix.

I went with Galloping Major, as apart form the style being different to much of what I have been painting of late (reminded me of Dixon) so a nice change (and they were hugely enjoyable to paint), I especially like the campaign look the figures have, as well as the variety of poses. They are a bit chunkier than Perry's or Warlord so can't be mixed with them, but the range is big enough that you don't need to. 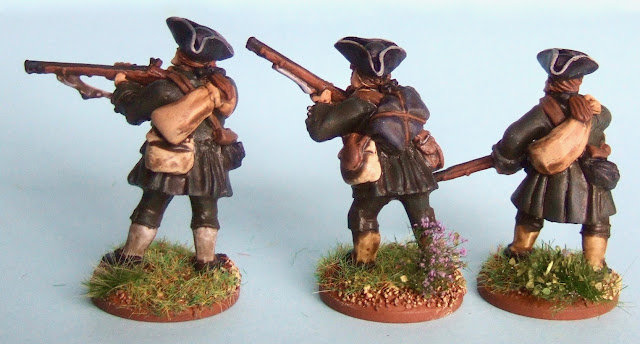