Rebels and Patriots: Taking the High Road to Yorktown...

Having played most of the scenarios in Rebels and Patriots, George and I have taken to trying scenarios from other Rampant rulesets and this time we chose Take the High Road scenario from The Men Who Would Be Kings as that had provided some great Colonial clashes. Unlike the original scenario with its fixed scenario length we chose the variable one most Rebels and Patriots scenarios have, deciding to end the game by rolling a D6 at the end of turn 9 and if the combined score of turns and dice score was 15 or higher the game would finish.

Following the Battle of Guildford Courthouse Cornwallis decided to fall back on a defensive position at Yorktown with various British columns being chased by American forces and small battles ensuing. This inspired our game with the retreating British finding an American company already in control of a vital road junction on the line of the main army's retreat...

Spotting the Patriot threat, the British commander deploys his force...

And advances forward, though the 1st Lights decide to hang back and admire the beautiful American scenery... 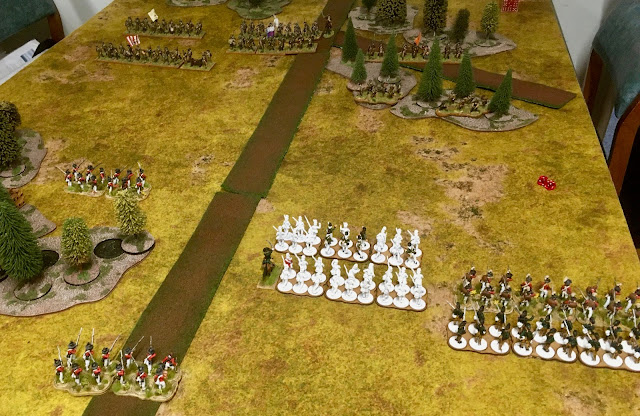 The British Legion and 23rd Welch Fusiliers lead the British advance on the right flank, with the 71st Highlanders in support, urged on by Banastre Tarleton! In the woods Virginian skirmishers take aim... 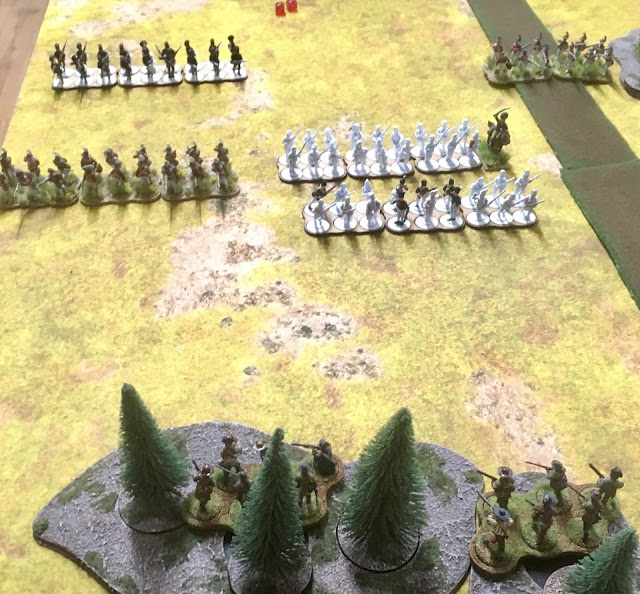 Meanwhile on the British left flank, the cunning American plan swings into action - to clear that side of the British light troops and then enfilade the main British army... 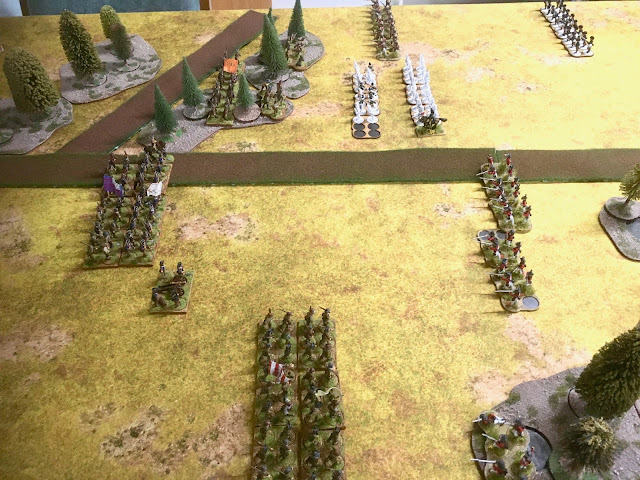 The American skirmishers start inflicting casualties on the advancing British and the 2nd Maryland move up in support... 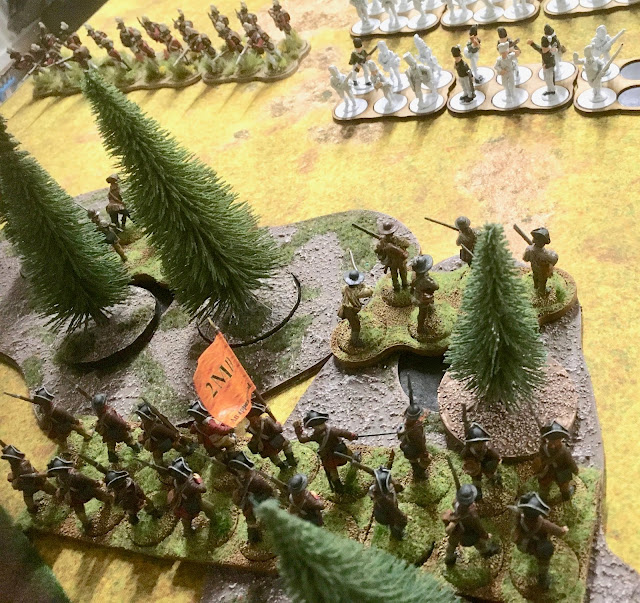 Meanwhile on the other flank, the British skirmishers start taking pot shots at the Amercian militia... 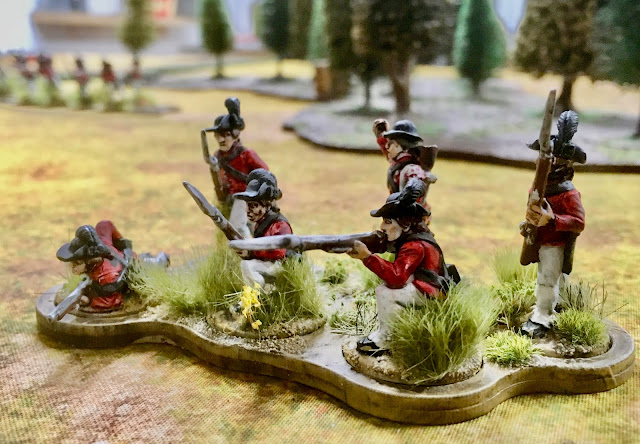 One unit of Virginia Militia is Broken having taken a casualty and badly failed its test but a second moves through and advances on the skirmishers... 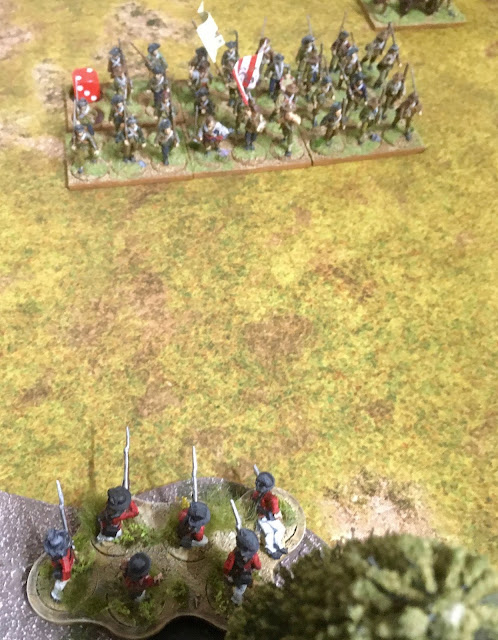 It takes a casualty and ends up with a Disorder marker having failed its check... 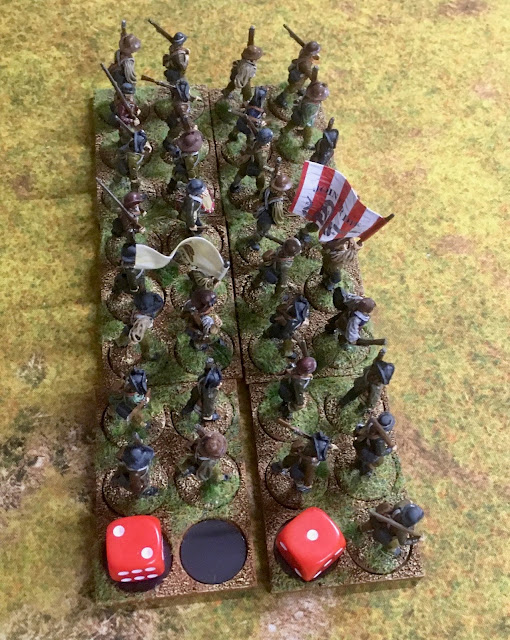 The Broken test requires and automatic Morale check, which the Militia unit badly fail causing them to Rout. This requires other units within 12 inches to take a Morale test too and whilst the 1st Maryland Continental Line and 1st Continental Artillery stand firm, the remaining two Militia units decide to "sod this for a game of soldiers" and Rout too! 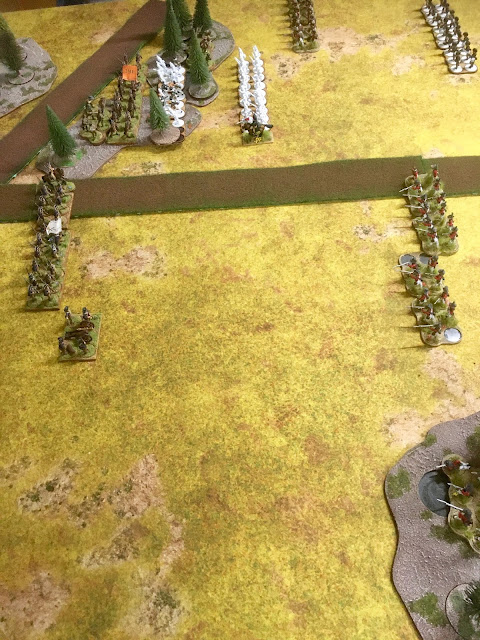 In one turn, having only suffered two casualties, three 18-man strong Militia flee the battlefield. The American right flank had disintegrated and the American plan was in tatters! 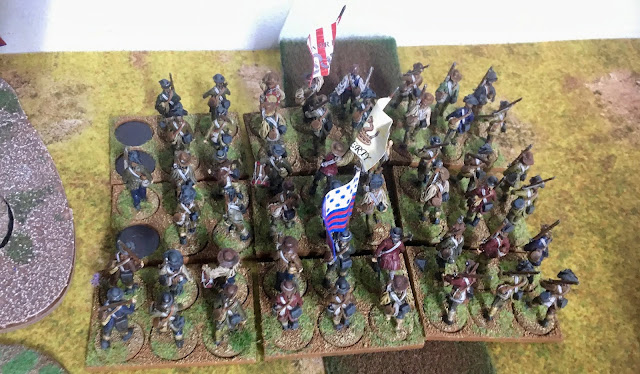 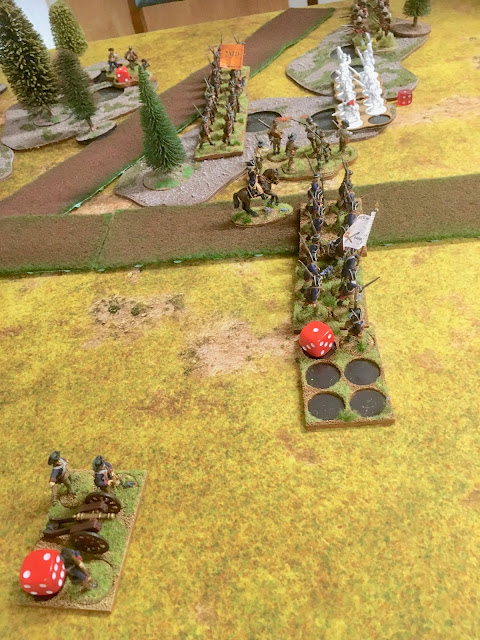 Whilst both rallied and continued to engage the opponents to their front, the battle was to be decided on the British right were George had focussed his main attack.

Having pushed the Virginian skirmishers back, the British Legion advanced into the wood into the guns of the 2nd Maryland! 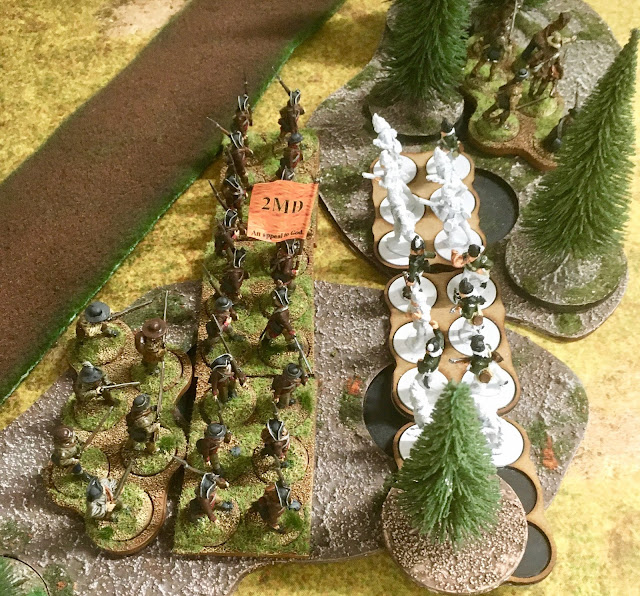 With a cry of "Maryland! My Maryland!" they shoot down three of Tarleton's Raiders and Disorder them, forcing them out of the wood  in a round of hand to hand combat! 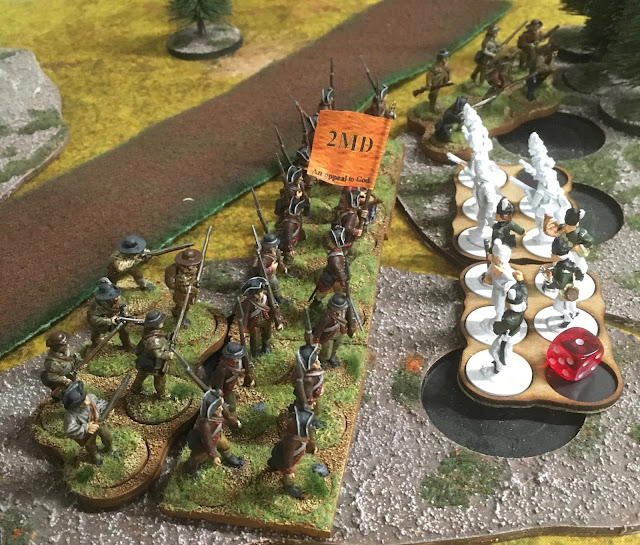 The 71st Highlanders then moved through the Legion with fixed bayonets to dig out the pesky Continentals!

However a round of fire from the Marylanders and supporting Virginian skirmishers on the Highlanders flanks stops them cold AND shoots Tarleton dead! 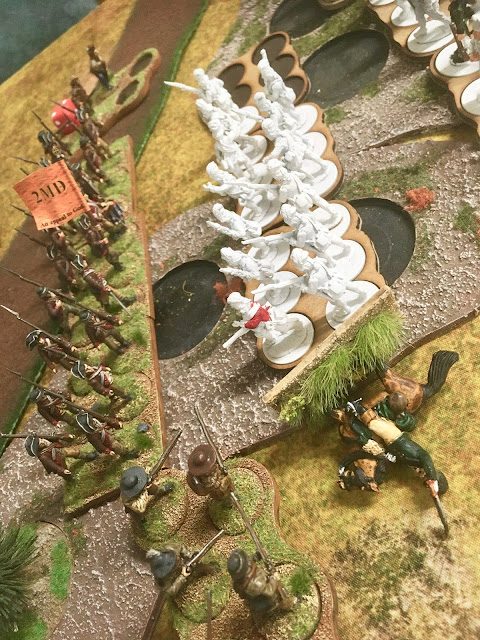 Whilst the Highlanders shrug off the loss of their general (they didn't like him much anyway), the British Legion, shocked by the death of their commander, rout! 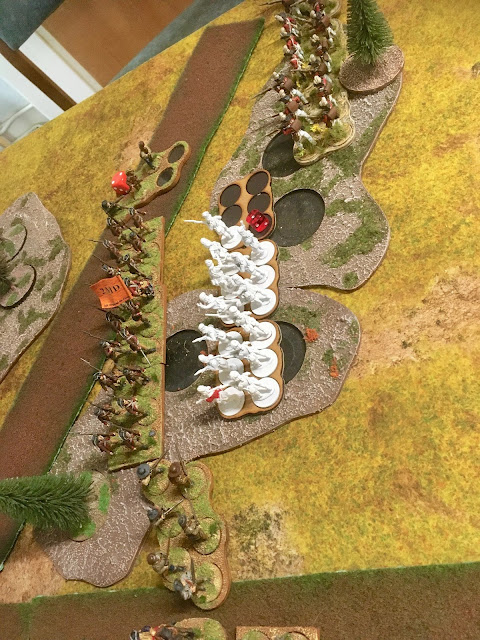 The 2nd Maryland follow this up with another round of hand-to-hand combat against the Disordered 71st  who being Disordered were fighting at half effect and unsurprisingly are Broken and forced to fall back. 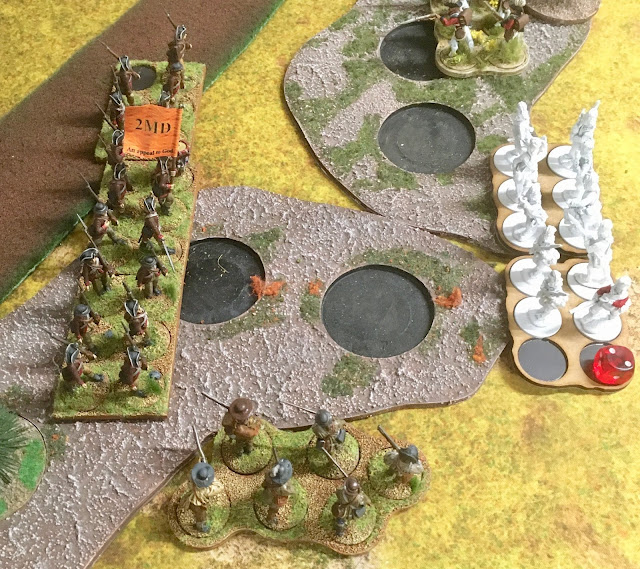 This was the end of turn 9 so I rolled a dice to see if I could bring the game to a conclusion with the Americans still holding onto the junction, albeit by the skin of their teeth! Needing a 6 I rolled a 5! :D 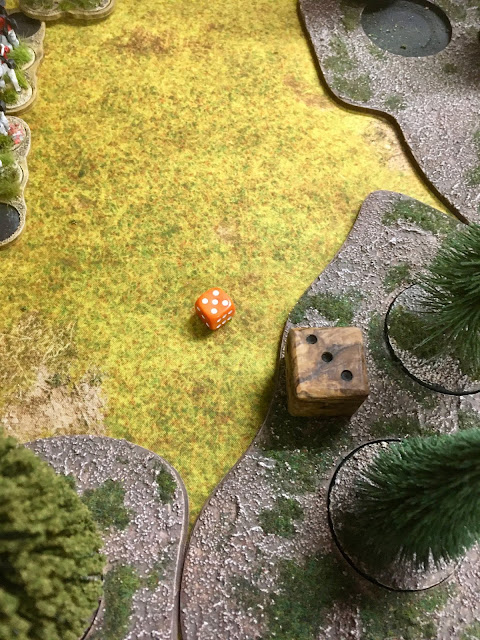 However at the end of the next turn (10) I repeated the roll so with a combined score of 15, the game was over and the Americans victorious!

A great game that ebbed and flowed, I really thought it was over when my right flank disappeared after my awful dice rolling for the Morale checks but the brave 2nd Maryland held up the British right long enough for night to fall and secure victory for the Americans. I was fortunate the game ended after turn 10 as the British still had enough of their army left to carry the field but time was as much their enemy as the 2nd Maryland!

After the game we had some discussion about the benefit, if any, in upgrading the Militia units from a standard 12 to a large 18 which I had done to make it take longer to reach half strength and a permanent Disorder market under the rules. That did seem irrelevant given their inability to hang around on the battlefield after taking minimal casualties, so it might be better to go back to the standard size in the hope they can get a couple of rounds of fire off before heading home - two 18 strong units roll 2 x 12 dice when firing, three 12 strong roll 3 x 12 so there is a benefit if I can get them into action.
Posted by Steve at 09:51:00