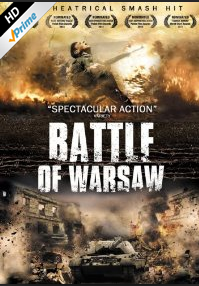 I know we have to suffer some bad war films with dubious historical accuracy, and some even worse DVD covers that have little to do with the film inside, but this takes the biscuit...

With SWMBO claiming the "wand of power" here at Bleaseworld (the TV remote to mere mortals) I thought I'd take a break from Vikings on Amazon Prime and see what war films were available as part of the Prime membership.

There are quite a few, mainly foreign, and I thought Battle Of Warsaw looked worth checking out. Ok, it's got a Leopard 1A4 on the cover but it'll do as a proxy Tiger if I squint!

Wrong Battle of Warsaw, not the 1944 Uprising, this is the film the DVD cover is for...


I'll let you know if it is any good when I've finished watching it (trailer looks epic), hopefully there is no Leopard in it!
Posted by Steve at 20:50:00