(Moderns Month) Echoes of a Distant Wargame (and Eldoradog) 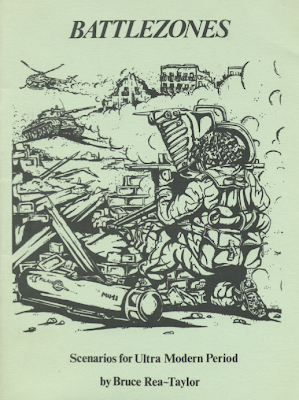 Over the last year or so I have almost completely switched to the dark side when it comes to reading. Whether books or magazines I pretty much have gone down the iPad route and having to work in London the last couple of days I was thankful I had over one hundred wargames magazines, another hundred odd wargames rules sets to peruse and literally a library of books of various genres, fact and fiction to save me from the boredom of train journeys and hotel rooms. The only downside is some old OOP favourites never made it to the digital age, especially some old wargames rules so I have started scanning and compiling some of these into PDF's for my own use.

One of these is an old TTG scenario supplement for their Ultra-Modern rules Challenger called Battlezones. Whilst the rules were a tad on the complicated side I loved this supplement when I was a teenage wargamer. One particular scenario, The Old Customs Post, I have played and umpired may times converting it to other periods, more often than not fantasy or SF. The scenario is quite simple and always changes. One army is retreating and its commander attempts to rally, rolling a dice for each retreating unit, and form a defensive line, the attacker tries to break through before the defenders have the opportunity to do so.

I re-read this scenario today on the train home with a little more interest as the original scenario is a 1973 Arab-Israeli War one, with the retreating Israelis trying to form a defensive line against the rampaging Syrians. It will be fun to actually play the scenario with the forces it was actually written for, something I have never done. Battlezones contains four AIW scenarios, but many of the others could be converted with a little work.

I must dig out Pony Wars next and scan that...