The FLGS is Dead! Long Live the FLGS! 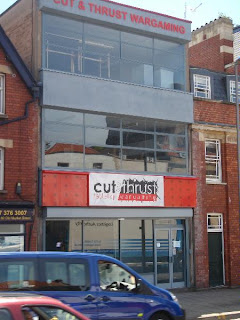 As I had to take son and heir into town today I decided to pick up some paints from Cut and Thrust Wargaming, my FLGS. I say "my" very loosely as I've been there only twice and I suppose it was not a great surprise to find it was closed, shutters up and a 'To Let' sign up.

Why had I only been there twice? Well the main reason was the sucky parking, although today I found a useful free parking area nearby, and the limited ranges of wargames material they carried. Aside from the paints there was little of immediate interest to me and to be frank that which was there could be bought cheaper on the internet (I know I should support the FLGS but when you add on parking the difference in cost was starting to get silly and I haven't won the lottery yet).

They did have some excellent gaming facilities but with their no children rule precluding a sixteen year old six footer who is more mature than many gamers I've met it restricted any desire to go there more often for anything beyond shopping.

We then swung by the local model shop to pick up the paints to find they had one lonely bottle of red left in the Game Color rack - doesn't anyone at Antics understand the principles of restocking? Grrr...

Anyway whilst Cut and Thrust is no more it appears a new wargames shop (Vanguard Wargaming) is opening in Bristol in a couple of weeks in Hotwells. It will be interesting to check this out though given its location I suspect parking may be an issue again.

The location is a tad bitter sweet as it is the site of the old  Spring Gardens Tavern which had been a great little venue for new bands and musicians before it closed.
Posted by Steve at 20:43:00