Returning from Paris with somekind of Gallic lurgy I have been confined to barracks, annoyingly missing out at a music festival I had tickets for in Leicester yesterday and the Reveille wargames show in Bristol today...

However, in between horrendous bouts of sneezing, sniffing and coughing I have taken the opportunity to sneak out and do a little bit of painting for my forthcoming Judge Dredd project (the first boxes of which arrived on Friday). 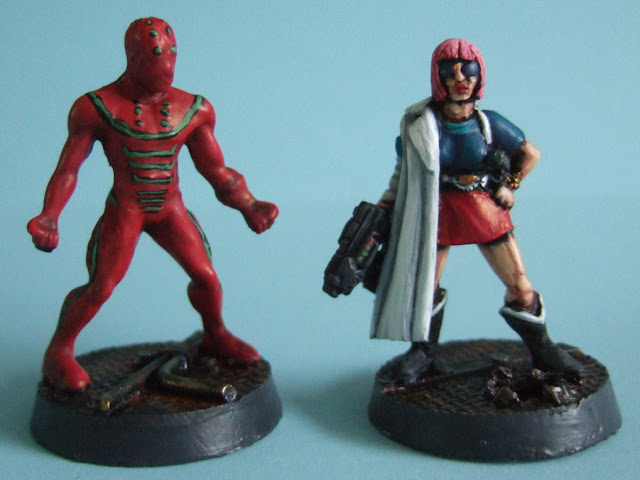 The first figure is a Heroclix DC Super-Adaptoid converted to be Johnny Falcone from the 2000AD series Marauder (don't worry if you haven't heard of it, there was only one series back in 2009). It was a fairly simple conversion using a bit of Liquid Green Stuff and a pretty distinctive looking miniature.


The second is a female with gun which I think came from Alternative Armies in the eighties. I had planned to use her as the beautiful but deadly Angelina in some Stainless Steel Rat 28mm adventures but have never been really happy with the face. I added a Green Stuff mini-skirt and painted her up in a generic SF fashion so she can be anything from a gang member, some Mega-City socialite's bodyguard or Wally Squad Judge.

Hopefully I can see off this cough and finish some Zulus!
Posted by Steve at 16:02:00