I finally got Ragnarok 59 off to the printers today (only eleven months late!). I have edited the SFSFW journal for two stints previously and had no intention of ever doing so again due to real world time issues but with no one stepping up to the plate after Nick Whittock's editorship I have found the mantle thrust once again upon my shoulders! 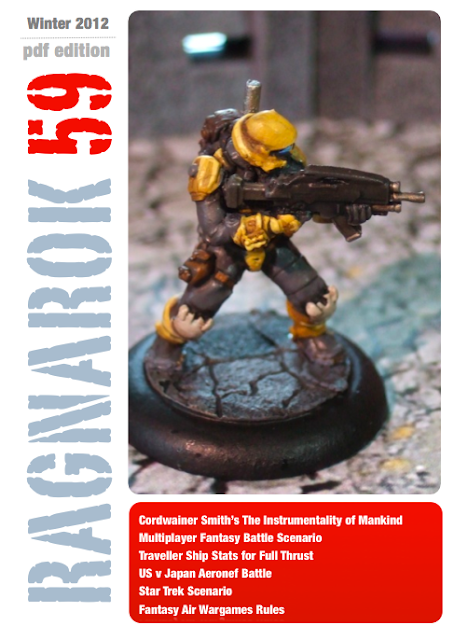 The editing and typesetting was largely straight forward this time around and a great deal easier and better looking than the hand typed, Letraset titled first volume I started the thing with twenty years ago!

Unfortunately what seemed straight forward when creating the full colour PDF that will go to Wargame Vault, was problematical as I tried to convert it to an internal black and white print ready format for the printers due to Apple's wonderful Pages software not being a clone of Word and things I know how to do in seconds in Word took a bit of working out in Pages. But I got there eventually...

Ragnarok is the longest running independent F/SF wargaming journal by a long stretch and most readers seem to think it is of interest. You will be able to buy the PDF in due course from Wargame Vault (or for a token charge if you are a SFSFW member and want a PDF to go on your iPad) but there is nothing like a paper journal to read down the shed/on the loo, is there?