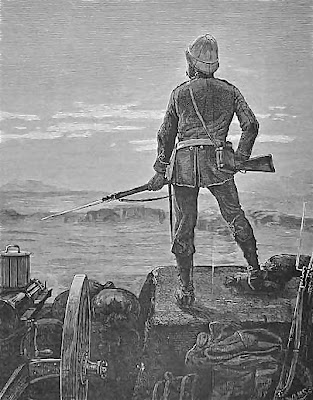 Ok, as announced yesterday November is Zulu Month, when I am going to try and get as many of the 288 Warlord plastic Zulus I bought earlier this year with some birthday money (and subsequent eBay foraging).

I've decided to start with that I am going to use Bickley's Washing The Spears rules with Black Powder lurking in the background. With that in mind I have decided to base the figures up as elements rather than individually in sabots which was my first idea. Whilst individual based miniatures in sabots would extend their usefulness (thinking smaller scale games with The Sword and the Flame) I concluded that this was a lot of fuss for limited return and if I every really wanted individually based Zulus, the plastics are cheap enough to buy another box and and when...

So, this means that I will be basing five figures on an 80x40mm base (which sounds spacey but isn't) giving me 10 regiments, 8 with thirty figures and 2 with twenty-four. The regiments are split 50/50 between married and unmarried units. Whilst I will be posting photos of painted units etc here, I have set up a specific Zulu War blog to go into some more detail and not boring readers who don't care what the difference is betwen the uMbonambi and the IsAngqu regiments. So if you want more in depth Zulu war stuff please follow me there as well...

Painting is going to be (hopefully) quick and dirty using a brown undercoat and Army Painter dip so things should move quite speedily (famous last words?)
Posted by Steve at 13:57:00