When I ordered the Der Kampfflieger Sopwith Triplanes via Shapeways I also picked up the Austin Osprey they produce. Only one prototype was produced in 1918 as a replacement for the Sopwith Camel, but the Osprey was beaten by the Sopwith Snipe so never went in to production, however, I thought it would be nice to have one for use in 'what if?' dogflights as it is a nice looking plane. As previously stated the model is 'printed' in a plastic resin (described by Shapeways as 'white, strong & flexible'). It has a slight rough finish and is apparently porous and will absorb paint like a sponge, however a good undercoating (I used the trusty old GW Skull White aerosol) and I didn't have any problem painting the PC10 Catchan Green fuselage etc. The model doesn't come with a pilot so I used a Reviresco one but he seems a bit 'big-headed'. Decals are, as usual, from Dom's Decals. 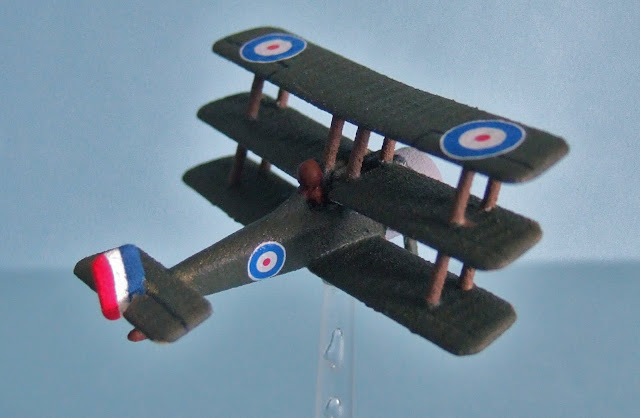 Overall I am very pleased with my first paint job of a 3D printed model. The detail is good, it is very light and the end result more than acceptable. Hopefully Der Kampfflieger will produce some more 3D prints of less common WWI planes in the future...
Posted by Steve at 19:27:00