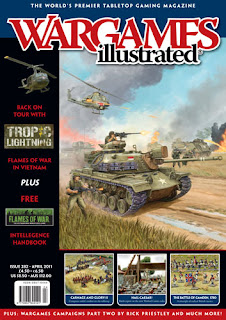 The last week has pretty much been a bust wargames wise as I have been working away again. Air Month wise the two Nieuports are now properly primed and awaiting a coat of grey, I'm still pondering the "Harry Tate's" (though even if they are end up White Russian or Soviet they'll still be a base of PC10) and gave a Wings of War Airco DH4 a spray of white as I didn't like the chocolate PC12 paint job and fancy raising a small Independent Air Force bomber unit (interestingly the pre-paints roundels lifted off the model after the undercoat and had to be scrapped off before a quick respray...). Next week should see them finished.

Wargames Illustrated 282 arrived the other day and although I've only managed to flick through it it does look an interesting issue (with a lot of Vietnam stuff). I did manage to read the interesting article on reappraising Dark Age Saxons although I felt it could have done with a better conclusion on what the author thought should be what we see on the tabletop.

The only problem with being on the road (well rail actually) was, as well as reading Lost Fleet 2 to 5, the mind kept pondering different projects... The WI/FOW Vietnam supplement led me to thinking about converting ColdWar: 1983 to a 28mm Nam set, then I started thinking about converting it to WW2, then I started extrapolating the Aeronef timeline in the War To End All Wars etc, etc. (you get the drift...). However, getting home I found the final draft of the Dick Garrison Pulp SF rules from Mike Baumann so once I've done the aeroplanes (and spacefighters) I think I'll dig out the League of Nations Space Navy and get them finished...
Posted by Steve at 19:40:00